There is still no concrete information in the public on what the „border correction“ idea entails – proposed by the Kosovo President Hashim Thaci. He has been holding press conferences for weeks and addressing the public, however, without revealing any details. For the time being, the media and analysts are the only ones who are revealing their own details and views on this „correction“. When the first allegations about the partition of Kosovo as a possible solution emerged, Pristina-based newspaper Koha wrote that there is a possibility that Serbia and Kosovo will agree on merging Lesak – part of the Leposavic municipality in the north of Kosovo – to Serbia. Lesak and Leposavic, by the decision of Serb authorities, were joined to Kosovo in 1959. The decision was linked to Aleksandar Rankovic, who is presented in the public as the closest associate of Josip Broz Tito and founder of OZNA and UDBA (the secret police organization of Yugoslavia). Rankovic’s name started appearing in the Kosovo media from the beginning of September. Koha in today’s article titled „Thaci will return Rankovic’s ‘gift’ to Serbia“ wrote about him also, and a day earlier in other media Rankovic was mentioned by the Kosovo President himself, while talking about Tito and Lesak. We publish a Kosovo press review.

„Let us not be slaves of Rankovic’s gift“

„The will of the citizens of Presevo, Bujanovac and Medvedja on joining Kosovo expressed on March 1st and 2nd, 1992, has been institutionalized in the state organs of the Republic of Kosovo. Their request is internationalized at a culminating world point. This issue will be discussed within the framework of the border delimitation, around 430 kilometers, between Kosovo and Serbia.

Let us not be slaves of the gift of the infamous anti-Albanian Aleksandar Rankovic, but let us work on the correction of history and increasing safety for a European future.

The results of a possible peace agreement between Kosovo and Serbia will include mutual recognition with Serbia, recognition by five EU countries, membership in the Council of Europe, membership of the OSCE and the abolition of the Russian veto in the Security Council as a prerequisite for Kosovo’s membership – even in the UN. This agreement would bring more peace and stability in the region, and it would open a safe and fast road towards NATO and the European Union for Kosovo,“ Thaci posted via Facebook earlier this month.

President Hashim Thaci refers to a part of the north of Kosovo as Rankovic’s „gift“.

The Presidency did not indicate how many territories this „gift“ encompasses, but, according to the head of the state, it is „a part of Leposavic, Lesak and part of Zubin Potok“, writes Pristina-based newspaper Koha Ditore.

He also said that Kosovo should not remain hostage to such „gifts“, while analysts claim Thaci’s idea of the exchange of territories is now understandable, and which he is presenting to the public as „border correction“.

Thaci: Neither Gazivode or Trepca will be part of Serbia, it is out of the question

The Kosovo-Serbia agreement is an agreement which will enable mutual recognition, which will automatically lead to the recognition by five EU countries, and Russia will also change its position. The head of the Kosovo state is an optimist and he believes that the border correction will happen and that no part of the country of Kosovo will be partitioned.

„My idea is the correction, the unification of Presevo, Medvedja and Bujanovac, no part of Kosovo’s property, Gazivode, or North Kosovo, and Trepca will be part of Serbia, it is out of the question.

It is true that others – Tito and Rankovic – at the time of the mass expulsion of Albanians from Kosovo in 1956-1959, in order to achieve a demographic balance, joined a small part of Leposavic, Zubin Potok and Lesak to Kosovo.

Should we still remain Tito’s victims?

It is the historic right of Presevo, Medvedja and Bujanovac to join Kosovo. I fully support and I am pleased that international factors are increasingly expressing their opinion on this.

I speak for the Kosovo political scene. The political scene is fully in favor of the dialogue, negotiation and reaching an agreement, not excluding correction,“ Thaci said.

Chronicle of the Tragedy Announced 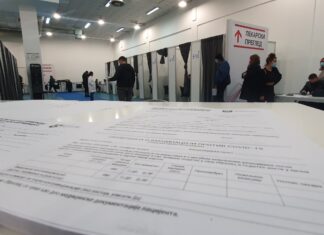