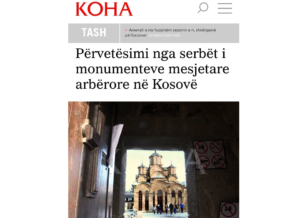 When talking about its rights over Kosovo in the international community, Serbia raises the issue of churches and monasteries in Kosovo. This unjust historical attempt was so successful that Serbian propaganda had an impact on reaching an international agreement – „Comprehensive Proposal for the Kosovo Status Settlement“, drafted by the President of Finland (March 2007) – in which orthodox monasteries built in the Middle Ages were recognized as the legacy of the Serbian Orthodox Church.

The text incited a reaction by the Diocese of Raska and Prizren who find that it „openly spreads ethnic and religious hatred“ towards Serbs in Kosovo and their cultural and spiritual heritage.

Even today, the deliberate display of the book „The Christian heritage of Kosovo and Metohija – The historical and spiritual heartland of the Serbia“ in the office of the Serbian embassy in Brussels, during a meeting between the European Commissioner for Enlargement, Mr. Oliver Varhelyi and the Serbian President, Aleksandar Vucic, is not only a political scandal, but it also shows the European commissioner supporting the Serbian thesis of the cultural heritage of Kosovo. Moreover, later it may reveal concrete ideas, such as: „Ahtisaari plus“; „Necessary bitter compromises of the Kosovar side“ and others, which can obviously politically conceive all kinds of standards, theoretically and practically unknown in the political basis of the European Union, presenting this only as „sui generis“ or as a „modus vivendi“ solution.

However, historical facts always enable a fair political view and treatment as far as the history of the culture of Kosovo is concerned.

All this has a historical basis in the Middle Ages. In the time of the Nemanjic dynasty, the territory of today’s Kosovo was not the epicenter of the activities related to the building of Serbian churches. The earliest Serb churches were built mainly in the narrow territory of Raska such as Studenica (near Novi Pazar), built by Stefan Nemanja; The Milesevo Monastery (near the Bosnian border), Sopocani (Novi Pazar), and the Zica Monastery, later rebuilt near Kraljevo, which was also the seat of the autocephaly of the Serbian Orthodox Church, built by Stefan Prvovencani.

In other words, the cradle of Serbian churches and monasteries during the two or three generations of the Nemanjic rule was located in Serbian territories – not in the territory of Kosovo, KOHA writes.

This spread of the Serbian churches coincides with the medieval Serbian territory given by the scholar Kostandin Jirecek, according to whom: “Within this territory, in the XI-XII centuries, just a few days on foot, a large desert stretched on the wide Byzantine border between Serbs and Byzantines – between the Byzantine border towns of Prizren, Lipljan and Nis, on the one hand, and the Serb mountain ranges above Lim and Ibar, on the other. After the Serbian occupation during the time of Nemanja’s rule (1180, etc.), these rich natural areas were soon populated, especially at the source of the Beli Drim and Sitnica rivers.”

The usurpation of Catholic churches

After the invasions by the Serbian rulers Stefan Decanski (1321-1331), Stefan Dusan (1331-1355), and the ones during the time of the last ruler of this dynasty – Uros (1355-1371), the territory of Kosovo found itself in the central parts of the Nemanjic state. During the time of the Nemanjic dynasty, the government and the Serbian Orthodox Church usurped numerous Catholic churches. At the same time, a number of religious buildings were adapted and rebuilt, such as the Church of St. Petka, the Church of the Holy Savior, the Church of St. Nicholas, The Church of Holy Archangels Michael and Gabriel, as well as the churches in Koris, Velika Hoca, Musutiste, and others.

The main monuments of the Christian culture in Kosovo, which are considered today as Serbian Orthodox churches or monasteries, such as the Monastery of Decani, Gracanica, the Church of Holy Archangels Michael and Gabriel and the Church of Our Lady Ljeviska in Prizren, the Pec Patriarchate, the Church of St. Stefan in Mitrovica, are ancient for both autochthonous Arbers and Serbs who invaded Kosovo, since to date no serious scholar has denied the fact that the churches and monasteries in question were built, rebuilt or repaired on the foundations of ancient monuments of the Roman and Byzantium period.

Medieval Orthodox churches located in Kosovo today (Gracanica near Pristina, Ljevis in Prizren, Pec Patriarchate, and Devic in Drenica) are not proof of Serbian culture because they were built before the Serbs arrived in this area, and the Church from Decani was designed and its implementation was overseen by the Albanian Catholic priest Fra Vita Kuqi from Kotor.

The church of the Decani monastery is the largest construction that preserves the elements of the Dalmatian-Arberian structure that come from the coast. The arch of the southern portal of the narthex contains an engraved inscription of the Arberian architect Don Vita Kuqi, who built the church of the Decani monastery together with 18 sculptors, writes Jahja Drancolli in the book „Religion in Kosovo during the Middle Ages,“ „Dardania Sacra 2,“ Pristina, 2000, p. 114.

This is best explained by the Serbian scholar, Pero Slijepcevic, who writes that these churches are not the work of the Serbian rulers whose names they bear because at that time „Serbs did not have any tradition of their own when it comes to construction, nor in painting. The Nemanjic dynasty built (financed) the construction even far from the borders of the Serbian state – to affirm their dynasty … Such monasteries were also financed in Jerusalem, Istanbul, Greece, etc.“

A note from the Vatican archives reads that the dissentient Serbian king Stefan Dusan, when he started with the reconstruction (not the construction) of the church in Decani and was forced to maintain it, arranged for a strong military unit to protect the craftsmen because the natives (Catholic Arbers) did not allow the craftsmen to work in their church.

The duke also received a certain monetary reward from the monastery because a man from his family guarded the monastery both day and night. In Decani, the duke was from the house of Sali Rruste. In the Pec Patriarchate, the duke was from the family of Zhuje Veseli from the village of Veliki Stupec in Rugova. And the family of Brahim Vojvoda from Ljausa near Drenica protected the church of Devic.

The Serbian historian Stojan Novakovic, who stayed in Pec/Peja in 1898, recorded some information about the dukes of the Pec Patriarchate on that occasion.

Among other things, he says: „Albanians from Rugova choose an elder from their ranks who is supposed to take charge of the security of the Patriarchate – the church duke. The one they choose is then presented to the abbot of the Pec monastery, who was obliged to accept the one they selected.“

Novakovic further states that, at the time, the people of Rugova have been guarding this monastery for 300 years. During times of danger, the monastery security was always increased. The tradition of churches being guarded by the residents living around them is quite ancient.

Thus, from the charter of Tsar Dusan, which was issued to the monastery of the Holy Archangels near Prizren, it can be observed that some villages were obliged to guard this church and accompany the Abbot (the head monk) whenever he went out onto the street, Drancolli writes in „Monuments of the Catholic Cult“.

In the book „Kosovo Monuments – Kosovo Monuments,“ published by the Kosovo Institute for the Protection of Monuments in 2004, historian Muhamet Mala writes that the tradition of protecting churches from Albanian Arbers was not accidental, as by doing so they believed that they were also protecting the value of their sites appropriated by others in certain historical circumstances.

Thus, the monastery of Gracanica, according to historical sources and archeological findings during 1957, 1963, and 1964, was a basilica built between the 6th and 11th centuries. This basilica was the center of the episcopate of Ulpiana Dardan. After the demolition, the church dedicated to the Blessed Mother of God of Gracanica was renovated on the foundations of the middle nave.

It is highly likely that the same church is cited as a Catholic parish church in the 1303 letter of Pope Benedict XI. Around 1316, King Milutin Nemanjic renovated the Gracanica monastery on the foundations of this ancient church built in 930, Drancolli writes in the „Monuments of the Catholic Cult“.

It also says that the monastery of the Holy Archangels Michael and Gabriel was built on an ancient Dardanian church from the period of late antiquity. The reconstruction was carried out around 1348. The monastery complex includes the Upper Castle, the Church of St. Koli, and the Church of the Saints. It is understood that this cult complex was used by the inhabitants for an Orthodox rite, both Arbers (Albanians) and Serbs, writes Fejaz Drancolli in „The construction of a Christian Illyrian-Albanian Cult“, published in „Dardania Sacra 2“, Pristina, 2000.

According to these sources, a great contribution to its renewal was made by Catholic merchants from Ragusa who lived and worked in Prizren. Archaeologists have discovered interesting fragments of Byzantine, Roman, and Gothic art in the ruins of this monastery. What draws more attention is the mosaic that has no parallel with any mosaic made in Serbia but is more reminiscent of the mosaic in the baptistery of the Cathedral of Santa Maria in Florence. The 1372 tomb of the Arberian prince Strazhimir Balsha, the then owner of the city of Prizren, is preserved in the church of this monastery.

To be continued in the next edition of the Cultural Section

The second part of the text by the same author was published on the 19th September: Koha: „Serbs built on the foundations of ancient Illyrian and Arberian temples“

The author holds a Ph.D.  in history. He is a research associate at the Ali Hadri Institute of History in Pristina.

Footnotes – partially included in the text – have been removed by the editorial office.