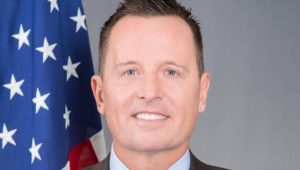 “Working with European allies, the Special Envoy can support negotiations by being patient with Kosovo, being realistic about Serbia, and disavowing land swaps” – the US Heritage Foundation advised the newly appointed envoy of Donald Trump for the Belgrade-Pristina dialogue – Richard Grenell. This Capitol Hill foundation, considered by some experts as influential in American politics, said that Grenell’s appointment sends the right message about continued US engagement in the Balkans. The Heritage also provided five principles for Grenell to be guided by in this dialogue.

“The U.S. has sacrificed significant blood and treasure since the 1990s to ensure that the Balkans remain peaceful and stable—and should have a say in any major development in the region” – the report published on October 11th states.

It is also the first of five principles that the Heritage Foundation outlined for a new Pristina-Belgrade dialogue envoy.

„The five principles” for Grenell: 1. “Understand that nothing is easy in the Balkans“; 2. “Be a Special Envoy, not a cartographer“; 3. “Work with Europe, not against it”; 4. “Be patient with Kosovo’s progress”; 5. “Keep eyes wide open when dealing with Serbia”.

“In order to be successful, Ambassador Grenell must be mindful that nothing in the Balkans is easy or straightforward, tinkering with borders is a bad idea, working with European countries in the region increases the likelihood of success, and that the U.S. should be patient with Kosovo and remain conscious that Serbia is Russia’s foothold in the Balkans,” the report reads.

Ambassador Grenell must encourage the peoples of the Western Balkans to reject historical, cultural or religious accusations and work constructively on strengthening trade relations, resolving border disputes, and giving up provocative rhetoric in favor of stability. These five principles should help guide the Special Envoy in his work in critical regions of Europe.

Below we publish the report in its entirety:

“Kosovo is a small country in the western Balkans with a history rooted in complex relations between different ethnic and religious groups. Kosovo is predominantly secular Sunni-Muslim and has a majority ethnically Albanian population. It is roughly the size of Delaware and has a population about the size of West Virginia’s. As a result of war in the late 1990s, a North Atlantic Treaty Organization (NATO) peacekeeping force, called Kosovo Force (KFOR), maintains 4,000 troops there. At the mission’s height the U.S. had 19,000 troops in Kosovo. Today the number is around 685.

Following the sectarian wars of the 1990s, Kosovo was placed under United Nations administration in June 1999. On February 17, 2008, Kosovo declared independence from Serbia and has been recognized by 114 countries, including the United States and all of its neighbors in the Balkans except Serbia, as an independent, sovereign nation.

In early November 2018, Kosovo imposed a 10 percent tariff on products made in Bosnia and Herzegovina and in Serbia (exempting international brands).

Kosovo imposed the tariffs on Serbia over Serbia’s opposition to Kosovo’s recognition as an independent country. On November 20, 2018, Kosovo’s third bid to join Interpol failed to reach the two-thirds vote required for membership.

Following the vote, the government in Pristina issued a statement blaming Serbia for the failed bid saying, ‘Serbia’s wild campaign shows once again its stand against Kosovo and against the idea of normalizing ties.’ Three days later, Kosovo raised tariffs on products from Serbia from 10 percent to 100 percent due to Serbian opposition to Kosovo joining international organizations, including Interpol. Kosovo’s deputy prime minister, Enver Hoxhaj, framed the tariffs as a defensive measure because of Serbia’s ‘aggressive campaign against Kosovo in the int’l stage.’

EU-facilitated dialogue, which since 2011 has sought to normalize relations between Kosovo and Serbia (initially successful in helping secure a series of technical agreements), has in recent years stalled, with the tariff disagreement contributing to the latest impasse since November 2018.”

“Serbia has long served as Russia’s foothold in the Balkans. Serbia is a fellow religiously orthodox nation with which Russia enjoys a close economic, political, and military relationship. Serbia and Russia have an agreement allowing Russian soldiers to be based at Nis airport in Serbia. The two countries signed a 15-year military cooperation agreement in 2013 that includes sharing of intelligence, officer exchanges, and joint military exercises.

In August 2018, Serbia took ownership of the first two of six MiG-29 fighters that Russia delivered to Serbia. While ostensibly free, Serbia is spending $213 million to have them overhauled by Russia. Additionally, Russia plans to supply Serbia with 30 T-72 tanks, and 30 armored patrol vehicles, the first third of which arrived at Nis airport in July. Serbian Defense Minister Aleksandar Vulin has stated that he also expects delivery of seven Russian helicopters (three Mi-17 and four Mi-35) by 2020. The so-called Russian–Serbian Humanitarian Center at Nis—widely believed to be a Russian spy base—is only 58 miles from NATO’s KFOR mission based in Pristina. Russia has relied on cultural ties to Serbia to further increase its role in the nation, positioning itself as the defender of orthodoxy and investing funds in refurbishing orthodox churches. Additionally, Russia has helped to establish more than 100 pro-Russian nongovernmental organizations and media outlets in Serbia.

Serbia and Russia have signed a strategic partnership agreement focused on economic issues. Russia’s inward investment is focused on the transport and energy sectors. Except for those in the Commonwealth of Independent States, Serbia is the only country in Europe that has a free trade deal with Russia. In January, Serbia and Russia signed 26 agreements relating to energy, railway construction, and strategic education cooperation.

In a January 2019 state visit to Serbia, Vladimir Putin stated a desire for a free trade agreement between Serbia and the Russian-led Eurasian Economic Union to be signed by the end of the year.

Additionally, Russia has held out the possibility of $1.4 billion in infrastructure aid to Serbia, aimed at building the Turk Stream pipeline and increasing Russia’s energy leverage in the region.

Russia has continued to oppose Kosovo’s recognition as an independent sovereign country, and has condemned Kosovo’s creation of its own Army. Despite its close ties with Russia, Serbia also maintains contacts with the West, for instance, trading far more with Germany and Italy than with Russia. Serbia also regularly conducts more military exercises without Russia than with Russia.

Like Russia, Serbia is a member of NATO’s Partnership for Peace program, and Serbia has been part of the U.S. National Guard’s State Partnership Program, partnering with the State of Ohio since 2006. The U.S. should be realistic and approach Serbia as it is, a country playing its relations with China, Russia, and the West off one another. That does not mean that the U.S. should stop seeking meaningful engagement. Rather, the U.S. should recognize that Serbia is unlikely to join Western structures anytime soon, and that holding out hope for a massive change in the nation’s trajectory is naïve.”

Nothing Is Easy in the Balkans

As Ambassador Grinnell rolls up his sleeves and dives into the Gordian knot that is the Balkans region, he should remember and be guided by these five principles:

1. “Understand that nothing is easy in the Balkans and be mindful of America’s past commitment to the region. Both Belgrade and Pristina will push simplistic and seemingly easy proposals as a way to normalize relations. It should never be forgotten that nothing in the Balkans is easy or straightforward. The U.S. has invested heavily in the Balkans since the end of the Cold War. Tens of thousands of U.S. soldiers have served in the Balkans, and the U.S. has spent billions of dollars in aid there—all in the hope of creating a secure and prosperous region that will someday be part of the transatlantic community.”

2. “Be a Special Envoy, not a cartographer. Due to the disposition of minority groups between the two countries, some suggest that a land swap between Kosovo and Serbia could speed up the normalization process. Swapping land and redrawing borders based on ethnic and sectarian lines would mark a dangerous precedent and would open up a Pandora’s Box in the region. Supporting an initiative allowing Serbia and Kosovo to swap thousands of acres of land is not worth the instability it could cause throughout the rest of Europe. The U.S. should make it clear that it does not support any land swap.”

3. “Work with Europe, not against it. The U.S. should work with its European allies to encourage Kosovo and Serbia to normalize relations. Stability in the Balkans is a major policy area of alignment Washington shares with Brussels. The U.S. needs to stay engaged in the Balkans, remain committed to the region’s security, and work with European allies, particularly the U.K. and Germany, to advance a transatlantic security agenda. This includes supporting the region’s transatlantic aspirations and continued U.S. involvement in KFOR.”

4. “Be patient with Kosovo’s progress. It is a poor country and suffers from high unemployment and corruption. The U.S. needs to develop a strategy that: (1) understands the improvements in good governance and economic growth will be a process and not an event; (2) focuses on Kosovo’s long-term transatlantic aspirations, such as NATO membership; and (3) engages the nation’s youth in building a robust civil society and a prosperous, dynamic economy.”

5. “Keep eyes wide open when dealing with Serbia. Some Serbian politicians talk a good game about wanting to join the transatlantic community, while continuing to court the Kremlin. U.S. policymakers should not forget or ignore that Serbia continues to serve as Russia’s foothold in the region. U.S. policymakers should be conscious of the fact that Serbia is not only no guarantor of stability in the Balkans but still a source of instability. This is especially true in Bosnia and Herzegovina with Belgrade’s support for separatism in the Republiska Srpska. That does not mean the U.S. should stop seeking meaningful engagement with Serbia, but that any engagement should be pragmatic and undertaken with a realistic view of Serbia.”

“The appointment of Ambassador Grenell as Special Envoy denotes the Administration’s intent to stay actively engaged in negotiations between Kosovo and Serbia. Ambassador Grenell must encourage the nations of the Western Balkans to put aside historical, cultural, or religious complaints and work constructively to increase trade relations, settle border disputes, and forego inflammatory rhetoric for the sake of stability. These five principles should help guide the Special Envoys to work in a critical region of Europe.”