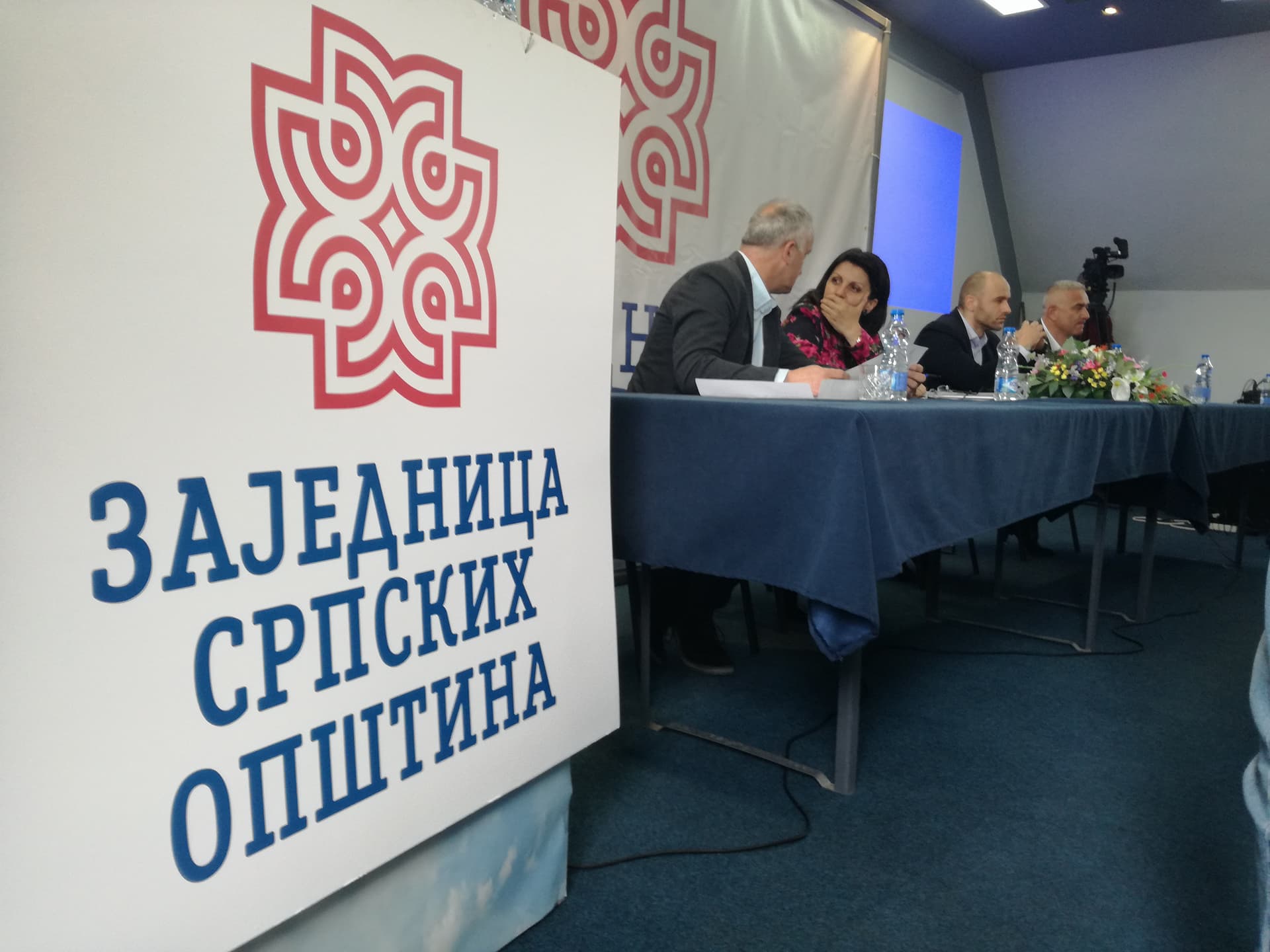 "Many have anticipated that we will move on today the way Serbs often do, first with heart and then with brains. We have reversed it a bit, I guess we have learned a bit, so we are to move slowly with brains so we don’t get accused by anyone tomorrow that we are making unilateral moves”, was an explanation provided today by the Serb representatives from ten Serb majority municipalities together with the Srpska List leadership and backed by the Office for Kosovo and Metohija on their gathering a day before the announced fulfillment of an ultimatum of the independent creation of the Community of Serb Municipalities if Pristina were not to commence the work on it by April 20. Today they welcomed what they saw as an EU-reached decision from April 4. Kosovo’s President and Prime Minister had “reactivated” the Management Team for the drafting of the CSM Statute that day, while the EU only welcomed the decision from Pristina and set out a four-month timeframe for the finalization of the draft Statute. "If we have waited for these five years, we will wait for another three and a half months. We will wait for these three and a half months and we say that on the fifth anniversary” – Belgrade officials say. And while the speakers have reiterated it on several occasions, all that they had been saying was in the spirit of preventing them “being drawn into political schemes” so that “Belgrade or Serbian people get accused of obstructing the creation of the Community.” It has also been reiterated that the CSM “must” be created in accordance with the First General Agreement and the one signed in 2015: “That is the only way that makes sense, nothing else makes sense anyways”. The speakers also displayed and interpreted two agreements key to the CSM – the First General Agreement from 2013, and the one on the CSM from 2015. They used the term “full supervision” for what was being defined in the text of the agreement as “full overview” in areas of health, education and economic development.

Petkovic: "We have counted every single day"

"Till the very date the CSM has not been created. There has been 1,826 days in total. A total of 1,826 days since the Brussels Agreement was signed, and we have counted every single day so that Serbs in Kosovo and Metohija should finally see the light of the day” – the Office for Kosovo and Metohija continued counting today.

-The biggest responsibility for the lack of the creation of the CSM lies with the EU, said the Assistant Director of the Office for KiM, Petar Petkovic.

"We never expected from Pristina either to create the Community of Serb Municipalities, but we hoped for the EU to do it, and that is why we went to Brussels, so that the EU would make Pristina assume its part of the responsibilities”, Petkovic said, and emphasized:

"But, it turned out that here in Pristina, Kosovo Albanians have a bigger authority over them when we speak of some other countries, than the authority of the EU, so it explains why the EU in past five years was incapable of creating the CSM.”

Nonetheless, they conveyed the optimistic news from April 4.

"On April 4, the EU has unblocked and activated the Management Team mandated to draft the CSM Statute. On this occasion, the EU has set a four-month deadline to complete the task. We will wait for these three and a half months to pass, since there has already been 15 days since then, so we could see where it is all going. We are not expecting Pristina to do anything in this regard and therefore we join the process since the EU was the one who made the decision to activate the Management Team”, this is how Petković explained what can now already be seen as a result of the previous announcement from March 28.

"The creation of the Community of Serb Municipalities is in the heart of the Brussels Agreement, intended to institutionally gather the entire Serbian community in KiM, but also guarantee the preservation of the Serbian identity and the overall development of Serb communities in KiM”, he said.

He reiterated that Serbia had fulfilled its end of the bargain in the fullest, while the biggest part of six out of 15 points pertained to the CSM.

Simić: Management Team mandate given in Brussels, not in Pristina

The Zvecan Municipal Assembly Chairperson, Dr. Biljana Jaredić as the program moderator introduced Igor Simic, a Kosovan MP as someone who “has very carefully studied the local legislation from within” and invited him to explain the CSM agreement.

"Those of you who know me also know that I never read from a paper when making speeches, since I always speak from heart and speak of what I believe in and try to speak of what I know. I could do the same today, but since some in Brussels and Pristina, but in Belgrade too, unfortunately, pick on some full stops and comas, let us be as precise, so I will continue reading”, said Simić, and continued with a longer speech reading out points from the First General Agreement pertaining to the CSM and, as he explained, legally interpreted them so that “common people” could understand too.

He also reiterated that: “after full 5 years, on April 4 the EU has marked the beginning of work of the Management Team for the drafting of the CSM Statute”.

He introduced members of the Management Team -Vinka Radosavljevic from Klina, Dejan Radojkovic from Zubin Potok, Igor Kalamar from Kosovska Mitrovica and Svetislav Durlevic from Štrpce.

"The team has been mandated in Brussels and not in Pristina", Simic said.

Management Team gets unblocked. Pristina attempted to sell us some empty case

"Thanks to strong unity and efforts of Serbs from Kosovo and Metohija, us – the elected representatives – and our people and the state headed by President Aleksandar Vucic, the work of the Management Team gets unblocked. I say this because of a very simple reason – this was not a gift to us, as nothing has been so in past 19 years”, he further explained.

"As our people would say, we should not build a house from the top down, but from the bottom up”, added Simić, reading through the two agreements with continuous legal interpretation for the audience.

-Pristina has attempted to not only stop this process, but to make this entire process senseless through some court decision, as well as to sell us some empty case, some organization that will have no competencies that are important for Serb people survival – he explained what was believed that Pristina was doing.

-We are open for all solutions and all discussions towards the creation of the Community the way it has been agreed. We are not open for any humiliation by anyone, derogation of decisions made by our people, but at the same time stepping over what was signed in Brussels, with guarantees from both, Belgrade and Pristina, and the EU itself. If we waited for five years, we will wait for another three and a half months – Simic concluded.

Milović: We cannot give it all; we can blame it on EU, but we also have to see where our fault is

The Zvecan Municipal Assemblyman from the opposition, Dragisha Milovic, was the only speaker outside the agenda.

Reminding us that the reason for the new gathering had been announced with a different message, as well as that the Serbian state insignia had been removed from the municipal hall for the first time, he addressed the Serb majority municipality representatives with a question on what would be the plan of this, “strongest democratic mechanism” of Kosovo Serbs like, after “these three and a half months” expired, and it all possibly ended without the creation of CSM.

"If Pristina does not want to allow for draft of the statute and the creation of the Community of Serb Municipalities after these three months – what we will do then as the assembly? We have to have a response to it either today, or at some of the following joint sessions”, said Milovic.

He also mentioned a need for outlining and agreeing on the red lines of Kosovo Serbs:

"In last five years the Brussels Agreement resulted in integration into Kosovo institutions and disintegration, or dismissal of Serbian-run institutions. There must be a red line set that we will not cross over. We cannot give out everything, we can blame it on the European Union, but we also have to see where our own faults are.”

Milovic reminded that both agreements emphasized that the Community was to be created pursuant to the Kosovo legislation.

And tomorrow, instead of the earlier announced creation of the CSM, in northern Kosovo, the Office for KiM Head, Marko Djuric is to visit a new brewery in Banjska and newly-constructed apartment buildings in Kosovska Mitrovica. This will be his first visit to Mitrovica after the arrest in the Mitrovica Palace on March 26.

Today is the fifth anniversary of the First Brussels Agreement signing.