The Football Federation of Kosovo has repeatedly called on Kosovo institutions and police to ban what they described as Serbia’s „illegal football competitions“ in the north of Kosovo – the participation of FC „Trepca“ from North Mitrovica in the Serbian League West. They sent official letters with the same request to international football organizations, FIFA and UEFA, on Thursday. FC “Trepca,” however, has no comment on this situation. The question remains whether the local and Serbian football federation will take measures to preserve Serbian clubs in Kosovo within the leagues under the jurisdiction of Serbian football authorities.

The FFK sent official letters to the Presidents of FIFA and UEFA on Thursday.

„FIFA and UEFA should immediately suspend the participation of clubs from Kosovo in competitions organized by the Football Association of Serbia. The situation will escalate if FC ‘Trepca’ participates in the Serbian League West. It will not be tolerated by the government, the police and other state officials,“ the FFK statement reads.

The FFK also called on these international football organizations to „force“ the Serbian Football Association to change its status which states that Kosovo is part of its association.

Furthermore, they demanded a reaction from the Kosovo institutions and stated that it is “illegal to organize improvised competitions in the north of Kosovo.“

The FFK also reacted in June to the news that FC Trepca from the north of Kosovo will be playing in the Serbian League West organized by the Football Association of Serbia.

“The Football Federation of Kosovo is the only competent organization that organizes, manages and regulates football competitions throughout the territory of the Republic of Kosovo,“ this federation emphasized at the time.

While the Kosovo sports authorities threatened with Pristina government and police actions, football authorities in the north of Kosovo remains silent.

FC ‘Trepca’ declined to comment on these decision made by the FFK for KoSSev.

„The club’s position is not to comment on the subject,“ the football club said in response to several inquiries from our portal.

Kosovo was admitted to FIFA, as its 210th member, in May 2016 by a majority of votes, without any changes to the statute of this organization. The same year, just a few days earlier, Kosovo also joined UEFA. These decisions followed years of vigorous lobbying by Kosovo and its partners, with the frequent justifications that the decision for Kosovo footballers to participate in the international arena as equals was based on the advantage sports has over politics.

Following the admission of Kosovo to UEFA and later to FIFA, Trepca referred to the House of European Football as „a criminal organization“ because the decision proved that „money buys everything.“ They also announced that, in practice and as far as the clubs from the north of Kosovo are concerned, including FC ‘Trepca’ – „the situation remains unchanged.“

„We still stand with our parent association – Serbia FA and the Kosovo and Metohija FA as their constituent member. We are continuing to compete exactly where we did so far – the Morava Zone League, the FA Region of Western Serbia! ”- they said at the time.

The Football Association of Serbia remains silent so far. Whether the FAS will also be guided by sport-based motives and proactive activities – such as the Kosovo Football Federation did in previous years in its struggle for football – and succeed in influencing the international football federation so that existing clubs from the north of Kosovo continue playing in their leagues – also remains to be seen. 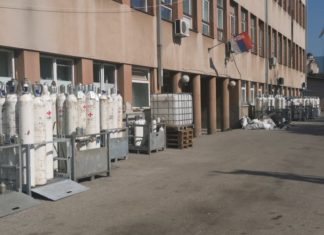