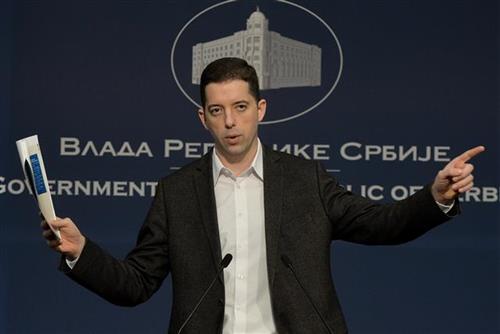 Official Belgrade has gotten hold of an „authentic document” regarding the Association/Community of Serb-majority Municipalities that Priština submitted to the U.S. and EU representatives yesterday morning. According to the document, titled “Working Mechanism for the Association of Serb-majority Municipalities”, Kosovo’s Prime Minister Ramush Haradinaj should be in charge of the implementation and creation of the A/CSM. This document is nothing short of making nonsense of previous claims by Kosovo institutions that they would create the A/CSM – says the Office for Kosovo and Metohija Head, Marko Đurić. He showed and read out the document to a press conference in Belgrade, just before his first trip to Kosovo after his arrest in Kosovska Mitrovica, which he claimed was submitted by the Kosovo Government, adding that instead of the creation of the A/CSM, Priština wanted to annul the collective political rights of Serbs in Kosovo. “Serbs will not accept it”, Đurić conveyed.

"With this document they have envisaged, neither more nor less, four Serb representatives to comprise the Management Team. For the Team to include 12 members, meaning having a majority Albanian participation. This plan also foresees the establishment of an Executive Committee that is to task Serb representatives with projects regarding the creation of A/CSM, while the Committee that should manage Serb communities and representatives is composed of Avni Arifi from Pristina, Meliza Haradinaj, Alban Demarku, Selim Selimi, Besnik Tahiri, Endrit Shala; representatives of the Foreign Ministry that pursuant to the UNSCR 1244 should not even exist, then representatives from the offices of Thaci, Veseli, Kosovo’s Constitutional Court, and that of Self-Determination, the Democratic League of Kosovo, along with other political parties and non-majority political entities,” Đurić said reading the document.

Priština, instead of creating the A/CSM, said – “is preparing bodies that are to represent a tutoring committee over the Serb communities in Kosovo.”

Answering a question how did Serbia come into possession of such a document from Priština, Đurić says: “Well, we have our channels through which we managed to achieve that.”

"Don’t forget that we were fully functional state there since 1912 till 1999. This is an authentic document that was delivered to the U.S. and Brussels representatives yesterday”, he added.

It is the U.S. and EU representatives that Đurić expects “appropriate reaction” from.

And for Priština from Belgrade this time a similar message:

"On this occasion I would like to convey to them what I usually do in similar circumstances, which is – you won’t see that film for sure. Serbs in Kosovo will work on establishing of A/CSM the way it was envisaged by the agreement”.

The intention to change the ethnic structure

Responding to a question whether Belgrade has information whether Pristina authorities would want to change the ethnic structure of some of the Serb majority municipalities south of the Ibar river, Đurić said there was such an intention and it was about, as he put it, an attempt to buy Serbian properties with illegal funds mainly, while the Serb representatives would be intimidated in order to instigate Serbs fleeing Kosovo.

Đurić noted that municipalities of Klokot and Novo Brdo, where Serbs compose 55 to 60 percent of population, were examples of such attempts.

After political messages, Đurić confirmed that he will travel to Kosovo on the afternoon, because, as he says – he wants to spend Easter with the Serbs in Kosovo.

He added that, like before, he sent a timely notification, as he put it, and that he believed that there were no reasons for someone to prevent him in his planned visit, but that in any case, his obligation was to be with Serbs in Kosovo.