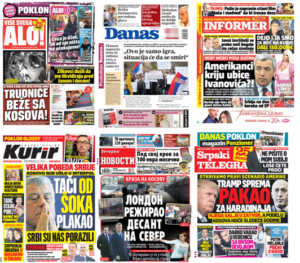 Alo: Pregnant women fleeing Kosovo. Blic: There’s food for now, but medicine is running out. Informer: They will accuse Serbia of killing Oliver. Kurir: The hangman has a hellish plan. I’m creating a Great Albania in January. Vecernje Novosti: A dangerous gathering in Pec. A seal on Great Albania in Metohija. Srpski Telegraf: We reveal America’s real scenario. Trump is preparing hell for Haradinaj, he will send him to jail, and he wants the partition of Kosovo next year. These are some of the cover pages of today’s Serbian daily newspapers and tabloids. Numerous events in Kosovo have found their place onto the covers of Belgrade’s newspapers and tabloids over the past week.

The General Assembly of INTERPOL voted on Kosovo’s membership at its 87th regular session, on Tuesday, November 20th. The Kosovo government decided, with a majority vote, to increase import taxes on Serbian products to 100% on Wednesday, November 21st. Three people suspected of being involved in the murder of Oliver Ivanovic were arrested in North Mitrovica while one person was arrested for resisting the police during the arrest of the suspects early on Friday morning, November 23rd. In addition, the Kosovo Police are searching for the fourth suspect in the murder investigation, which is the Vice-President of Srpska Lista, Milan Radoicic. The same party organized a peaceful rally protesting against the arrests and the introduction of a 100% customs tax.

The headlines for Thursday, November 22nd, were marked with the introduction of a 100% tax on imports of products from Serbia and Bosnia and Herzegovina. Srpski Telegraf: Shiptar’s retaliation, they raise taxes by 100% and are preparing more evil! Alo: Revenge for INTERPOL, Haradinaj announces war. Informer: An attack on Serbs is being prepared, Shiptars want war. Kurir: Europe, shame of you! Why are you silent? This is a prelude to war and persecution of Serbs from Kosmet. Vecernje Novosti: They are avenging the debacle in INTERPOL with taxes. Politika: Pristina is avenging Belgrade because of the debacle in INTERPOL, while Danas daily published Natasa Kandic’s reaction to Kosovo’s failure to enter in INTERPOL: Kandic: the Government hurt Serbs in Kosovo by opposing.

Terror, they are burning Serbian goods like Nazis burned books, the hospitals are running out of oxygen tanks, the prices of food in Kosovo are sky-rocketing and the Serbian newspapers are on the blacklist – the Alo tabloid published on Friday, November 23rd. Srpski Telegraf revealed Plan B for responding to Albanians: We reveal, this is how we will answer to Albanians, Vucic’s Plan B for Kosovo.

Informer announced bomb attacks in the North: Shiptars are preparing bombings in the north of Kosovo. Kurir describes the situation in KiM as being similar to concentration camps: It is like Serbs are in a concentration camp, while Blic published the headline: Serbs are scared, the goods are running out, Haradinaj is threatening.

Danas daily reported on what the Kosovo Minister in the government of Boris Tadic, Goran Bogdanovic, had to say: This is just a game, the situation will calm down. At the end of the week, Alo reported: The cry of Serbs from Kosovo and Metohija. We will die of hunger and terror.