After the Pristina and Belgrade media headlines: What did Delawie really say?

They followed interviews with the departing U.S. ambassador to Pristina, Greg Delawie with the Pristina’s KTV. What exactly did the Ambassador say? Please read below the transcript’s excerpt originally published on the U.S website (unedited version).

AK: We discussed in the previous interview with you, there are many ideas going around about how the final solution of the agreement would look like between Kosovo and Serbia and many are saying that maybe some exchange of territories or partition of Kosovo can again come into the table. What is the U.S. stance on it?

Ignore the fake news. Here’s what I said, “Kosovo needs to figure out what its goals are, it needs to try to achieve some kind of consensus on those goals, and that is what I am focusing on right now.” Read my interview on @RubikonKTV for yourself: https://xk.usembassy.gov/ambassador-delawies-interview-for-rubikon/ 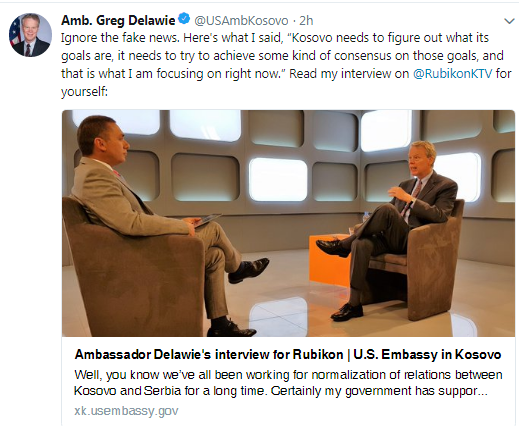 I’m not going to get at what could be the elements of a deal, of an agreement, at this point. I don’t think that is really helpful. Especially when I’m trying to encourage people in Kosovo to take on that responsibility and participate in the discussion. So I’m not going to say who I think should be in the room, I’m not going to talk about the shape of the table, I’m not going to talk about what should be the elements of the final agreement. I can say that Kosovo politicians, Kosovo citizens, are fully capable of making these decisions on the negotiating positions themselves, and the United States will be standing by them as they talk about these things. Our support for Kosovo is consistent, it’s unalterable, it will continue into the future. I think those are the elements of what a deal might look like, are elements that are more appropriately discussed by people in Kosovo.

AK: It’s been almost three years since you arrived in Kosovo, did you notice any change of U.S. policy towards Kosovo and the Balkans in these last three years, from the beginning up till now while we are talking?

AMB: People react as things change, there was this terrific deal between Macedonia and Greece, so our position changes when things change. We celebrate good news like that. So regarding U.S. support for Kosovo, I sense no change. Our commitment to Kosovo has been bipartisan, it has continued since the 90’s. I have no hints from the new administration of any change in that position.

AK: I note, up till now the U.S. policy towards Kosovo was Kosovo was independent, Kosovo’s sovereignty and territorial integrity is the one that should be respected by all sides, partition is never to be discussed, so now are you hesitant to say that, to repeat this again?

First of all, Americans support for Kosovo’s independence is unshakable and will continue. The other questions you ask relate to the elements of a final deal and I’m still not going to get at those right now for the reasons I’ve already mentioned.

AK: But you exclude partition, or you do not exclude that?

AK: Does this mean that for the U.S. administration every deal that can be reached between Kosovo and Serbia will be okay with America?

I’m still not going to answer that question, I’m sorry, you are very creative in asking several different ways. But it’s still the same question. I don’t want to bore the audience and I’m not going to get at the elements of the deal today.

AK: But you answered these kinds of questions before. Something has changed.

Today, this week, I’m focused on encouraging Kosovo political parties, Kosovo politicians, to try to get together and work on what are Kosovo’s goals. I think we are getting ahead of things if we talk about what’s going to happen at the end of the game. Kosovo needs to figure out what its goals are, it needs to try to achieve some kind of consensus on those goals, and that is what I am focusing on right now.

AK: There should not be redlines?

I don’t think it’s really helpful for me to talk too much about redlines, it’s up to Kosovo to figure out what its goals are. I think Kosovo is facing a unique moment in its history when it can help determine what the future is going to be for Kosovo, for Kosovo’s children, and to put aside the nervousness, the tension, the controversy that has characterized the relationship between Kosovo and Serbia these last several years. I think it’s important to focus on how to make the future better for all of Kosovo’s citizens, for Serbia’s citizens as well, and to find out a way to get to this normalization that we’ve been working on for a long time.