My reply to your letter could spread over many, many pages – all without me actually writing down everything it triggered in me. Lately, I have been trying to avoid talking about topics that are painful to me, not because I’m afraid of confrontation or debate – and your letter certainly did not cause such a reaction in me. I avoid these conversations because I have decided to try to spare myself. I realized that there is no end to this madness and chaos that has marked my whole life and that I have to keep my nerves for the long run, like a child who sticks a piece of gum he chewed on the entire day to the bottom of a cup so he can go back to chewing it again tomorrow. And repeats that every day.

Of course, it is different when I reply to a colleague. Jelena, we’ve never met, but I feel like we know each other. A fellow journalist is like a fellow comrade from a distant war on some faraway front where you fought together against the same forces. And it connects you, even if you never met on that front. Our weapons were pointed in the same direction, towards the injustice against which we fight every day. And like the same former comrades, we don’t like talking about that front except with those who know exactly what we’ve all went through.

And what we are still going through. I wanted to speak to you about something you mentioned in your letter, which immediately reminded me of my personal experience. Traveling. From my first days in this profession until today, I sat on buses, vans, trains, planes, and cars that took me to some foreign city, to a new source, an untold story, or an unfinished conflict. It’s hard to explain to someone on the outside how my body can bend and twist to fit in every seat, to completely isolate itself from irritating music, to relax in the most uncomfortable places, accumulating energy that starts to burn up as soon as I get out of the vehicle. But I don’t need to tell you about that.

I would like to tell you about the borders, not figurative borders in this case – that would be a topic for some next letter – but about the most definite borders – the state borders. Early on I realized that the concept of a state is very variable in the minds of people born in this part of the world. While yours and my comrades – journalists from some western country – have had a passport or an ID card of that same country their entire lives, I can pull together a museum collection made out of my documents, both expired and valid. And that collection would still be less valuable than that single document of theirs.

I only know that I have an undiagnosed phobia of boundaries, both existing and nonexistent. I want to tell you about that. I just returned after a long stay in the United States, where I tried to abide by this rule I mentioned at the beginning of the letter – not to mention topics that are painful to me. It was easy, considering that our comrades there are so traumatized by the madness they are currently experiencing that they didn’t insist on me telling them about the insanity I left behind on another continent. On one hand, I found them adorable because all of these things happening are so „new and unexpected“ for them.

By the end of February, I was preparing for a trip to Mexico City, a city I read about my
entire life. I was terribly excited, especially since I grew tired of the New York City rain and
cold, and I craved a hotter climate and people for whom I (correctly) assumed were more
pleasant than the financial managers in tight shirts with whom I usually rode the subway.

When you are from Kosovo, you don’t have that luxury of going on a trip without checking at least five times which document you’ll take and how you’ll cross the borders. Realizing that I cannot travel to Mexico with a Kosovo passport and I need a visa in the Serbian passport – because Mexico does not recognize Kosovo – I called their embassy in Washington.

„Hello, good afternoon, I’m interested in the procedure for obtaining a Mexican visa.“

The lady on the other side of the line asked, „Excuse me, but where are you currently
located?“

„In New York, ma’am, can I apply for a visa in your consulate in New York?“

„How did you come to America?“ she confusedly asked.

Almost equally confused, I replied, „Well, I have an American visa, ma’am.“

In a significantly more relaxed tone, the lady replied, „Then you don’t need a visa for
Mexico! You can travel on that visa.“

At that moment I understood the cause of her initial concern. She thought I was in America
illegally, and that I’m now daring to ask for a visa for Mexico. At the moment when Trump is shouting from the rooftops that he will not let thousands of refugees from Central American countries cross the US border, nobody cares for those going in the other, let’s say, less desirable direction – from America to Mexico.

I swallowed the lump in my throat and tried again, „Yes, ma’am, but Mexico does not
recognize the passport with my American visa, so I have to have a Mexican visa to travel to
your country.“

„And in which passport do you have the American visa?“

„And with what passport do you want to travel?“

„Wait a minute, I need to consult with my colleague.“

Realizing that this was probably the most bizarre conversation she had that day, I thanked
her and told her that I will wait while she consults with her colleague. In those moments of
silence and uncertainty, the thoughts of these painful topics suddenly floated to the surface, escaping from the little drawer in my head where they were hidden from the moment I left Pristina. Wherever I go, the spirits of the Balkan chaos follow me, I said to myself. The lady returned to the phone at one point and said I can go to their consulate to apply for a visa whenever I want. I am not going to repeat the reactions similar to the reaction of the embassy lady that welcomed me when I landed in Mexico City, purely because I don’t want to ruin the wonderful impressions from this beautiful city.

Perhaps people reading this will think that it serves me right because I travel to distant parts of the world. But people from Kosovo who are dealing with non-existent documents of nonexistent states, or whatever we have decided to call them, know that it happens everywhere. On this occasion, I will tell you something that happened to me a little while
back, not because you never heard of such experiences, but because it is easier for me to
share it with you than with anyone else.

I am returning from the conference in Cluj-Napoca, the capital of the Romanian northwestern province. I decide to go with colleagues from Skopje who are driving from Romania through Serbia to Pristina. I know them for a long time, and the conversation is relaxed and pleasant, as it usually is after the work is done. We reach the border with Serbia, where the Romanian side is located on one side, while the Serbian side is located on the other side of a bridge. On the other side, the high mountain is visible, where the Yugoslav flag stands, made with colorful stones, and next to it the inscription TITO also made with stone. We find that funny and start discussing how it, at some point in the past, served as a kind of threat to those coming from – for us – inferior neighboring communist country, and how now it serves as an empty symbol of something that does not exist anymore. My insane situation fits nicely in this debate, as I give the Romanian border police a passport of a country they do not recognize, but whose documents they accept, in which there is a Greek Schengen visa – a visa from another country that does not recognize Kosovo but issues the Schengen visas for that passport.

We pass this border without any problems and we head towards the Serbian border across
the bridge. We all take out our ID cards, my colleagues – the Macedonian ID cards, and I –
the Serbian one – from now on Kosovo documents are not to be used until we reach the
Kosovo border control at the Merdare border crossing. The police officer checks the IDs of
my colleagues, and then he pauses on mine. „And where is your passport?“ I am surprised,
and I tell the gentleman that I’m waiting for a new passport to be issued in Belgrade, but
that I thought I don’t need it because I’m returning to my home country.

„But the Romanians did not let you pass with your ID card, so where’s your passport?“

I think to myself, why are you interested in how the Romanians let me ass – I couldn’t fly
over to the Serbian border crossing from the Romanian side, which is located within eyeshot – on the other side of the same bridge. Years of experience taught me not to be
rude to border police officers and that is why I kindly ask: „Can I enter the territory of Serbia with an ID card?“ He ignored this question and continued, „But the Romanians did not let you pass without a passport.“

This goes on a little longer until I give up and give him my Kosovo passport. He says nothing while he leafs through my passport, which contains German, Croatian, Slovenian, and Greek visas and stamps from all kinds of places. In the end, he just says, „Everyone please get out of the car and open your suitcases.“

So he and his colleagues first start searching the entire car, then they open up our suitcases. Each box and container and bag is opened. In my case, even those small soap boxes from the hotel I often take with me because they are useful during a short trip, but as the only woman in that car – and women often think about how handy these boxes are – I blush from embarrassment when the policemen pull them out in front of my colleagues.
Then they call me to a separate room, where they ask me what I did in Romania, and I
show them all kinds of journalistic accreditations and invitations and try to convince them
that I was at the conference for a few days and that I’m returning home.

When they finally let us go, silence falls over the car. I don’t know if my colleagues felt bad
or uncomfortable that they treated us like this because of me or if they did not want to
comment on such behavior at all. And I, a young journalist who constantly tries to be
respected in the presence of older and experienced colleagues, feel ashamed because I am
humiliated again, not because of my work or my attitudes, but because of my place of origin and these useless documents. For the umpteenth time.

Jelena, to round off this letter, which again turned out to be a long one, although I wanted to avoid this – I equally hate and love traveling. I love that new and unexpected thing that awaits me behind a new border, but every time I cross a border, I think whether I’m crazy for trying to do something with my life, when the greater powers have decided that I can move without any problems only within my existing or nonexistent borders, like in the courtyard of my own house – but never outside of the fence.

Until the next letter, warmly, 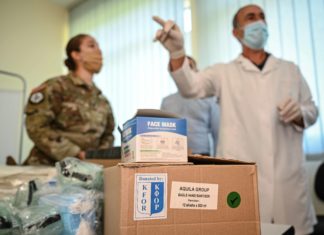