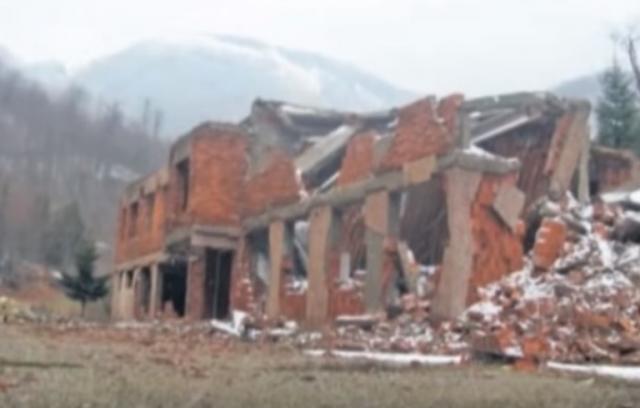 One battle – two narratives. One name, two homelands. Two emblems – one suffering. This is how the Battle of Kosare is remembered by the two peoples. For some, it was „Serbian Thermopylae“ and „The Second Battle of Kosovo,“ but also „the slaughterhouse of Yugoslav/ Serb youth.“ For others, it was „the last blow to the Serb genocidal regime“ and „the broken boundary of the Albanian nation.“ Each side celebrates its heroes, while referring to the other side as criminals or terrorists. The 22nd anniversary since the beginning of the Battle of Kosare is commemorated mostly by the army in Serbia, and top officials in Pristina.

On April 9th, 1999, on Good Friday, members of the Kosovo Liberation Army, in addition to NATO airstrikes, launched an offensive on the Yugoslav military watchtower in Kosare and other military posts on the Yugoslav-Albanian border.

The then Yugoslav military forces were vastly outnumbered, however, according to military sources, they managed to fight back.

In those clashes, the Yugoslav Army lost 108 soldiers. The majority of them were young men from 18 to 20 years of age, serving compulsory military service since March 1998. In many testimonies after the war, it was revealed that these inexperinced soldiers – due to the talk of war – being sent to a watchtower on the border with Albania.

According to Serb sources, more than 200 people died on the side of the KLA, that is – 113 members of the KLA, as Pristina reports.

The clashes ended on June 14th, 1999, after the signing of the Kumanovo Agreement, when the Yugoslav Army withdrew from Kosovo.

Four years ago, the Serbian President, Aleksandar Vucic referred to the most important battle from the war in Kosovo – the Battle of Kosare as „Serbian Thermopylae“ and „the Second Battle of Kosovo“. He thus spoke in front of the mother of a killed soldier, Tibor Cerna and the then newly unveiled monument to the brave young man in his hometown – Debeljaca.

Vucic did not speak of Kosare today.

The only reminders of the anniversary of the Battle of Kosare arrived from Nis, Krusevac and the cabinet of the Serbian Minister of Defense, Nebojsa Stefanovic.

After Belgrade in 2017, this year, on the anniversary of the Battle of Kosare, the city of Nis also renamed a boulevard after the battle – „Heroes of Kosare“. The unveiling of the memorial plaque in Nis today was also attended by a general convicted for war crimes of the YA in Hague, Vladimir Lazarevic, who stood right beside the mayor of Nis, Dragana Sotirovski.

„Serbia remembers and celebrates its heroes. We loudly remember that NATO aggression is a crime without punishment. Our children and generations to come must know who their ancestors were and what they gave to their country,“ Stefanovic said.

A tank, one of the two used at Kosare, was unveiled in the military barracks in Krusevac, with the inscription: „Don’t forget the dead, respect the living“.

In the same city, veterans of the Battle of Kosare and the Yugoslav Army laid wreaths at the monument „Defenders of the Fatherland“ where 108 trees were planted – the same number of Yugoslav soldiers who died in Kosare.

No Serb official has reacted so far.

Pristina: “The foundations of statehood come from this place”

On the other hand, the top Kosovo officials marked this day in the morning by laying wreaths at the „Memorial Complex to the Fallen Fighters of Kosare.“

The three officials assessed that this battle was lead for the „liberation of the country“ and that „the foundations of statehood come from this place“.

During the commemoration, Osmani said that „it is the duty of the institutions to turn the sublime sacrifice of fallen fighters into the strengthening of Kosovo.“

„All those who fell today in the battle of Kosare have their foundations, they built our foundation, that is why this state we enjoy today has such strong foundations because it was built on the blood of all the martyrs we remember today. It is our duty – we owe it to those who made their sublime sacrifice for freedom to strengthen the state today in order to make it into something all the martyrs of the nation dreamed of and what all citizens will be proud of,“ said Osmani.

Osmani: „The last blow to the Serb genocidal regime was dealt on April 9th“

The President of Kosovo also reacted on Facebook, stating that this event from 22 years ago was – „the freedom bell“.

„Freedom made sense when the heroes of the 138th Brigade finally sealed our freedom, laid a strong foundation for the future, the state and historic memory,“ Osmani wrote in a Facebook post.

„From April 9th, 1999 to June 10th, the heroes of this brigade, in this country, like nowhere else, dealt the last blow to the Serb genocidal regime, which marked the capitulation on this day.”

According to Osmani, Kosare also removed the „emotional barrier“ with Albania.

„On this day, not only has the boundary stone been removed, but so was the emotional barrier between the brothers and sisters in Kosovo and Albania.“

According to the Kosovo president, Kosare has „transformed and continues to be a pilgrimage to freedom“.

„This is where they united courage with the mind, sacrifice with the ideal and eternity with freedom!“ she stressed.

The Chairman of the Assembly of Kosovo, Glauk Konjufca, assessed that this battle was one of the most important moments of the KLA, adding that it „broke the boundary and showed that the Albanian nation is together and united in the liberation war“.

According to Kosovo Prime Minister Albin Kurti, April 9th in Kosare is proof of Kosovo’s history.

He recalled that two anniversaries are being marked today – the Day of the Kosovo Constitution and the Battle of Kosare.

„Today is April 9th – the day of the Constitution of the Republic of Kosovo, but even nine years before this we have April 9th – Kosare, which is full of bloodshed of fallen fighters who are proof of our glorious and proud history, but also a great reward we paid for the freedom of our country, the independence of our country and the progress of all. Fallen fighters don’t need us, we need them and through them we bring good government and institutional policies, as an obligation to make it an institutional responsibility for children,“ he said.

„Today we remember those who died here, we thank the living, above all, we remember the sacrifices of KLA soldiers who gave their lives on the altar of freedom… 113 martyrs of Kosare who today remind us how precious sacrifice is for freedom and its contribution to the state. From here, they gave us the obligation and the voice to build our holy land,“ he said.

Unlike the Kosovo public and politicians, in Serbia, the topic of the Battle of Kosare was a taboo for many years after the war. One explanation of why that was the case reads that the military authorities and state centers of power wanted to avoid the sensitive question of why they sent insufficiently trained young soldiers from working and rural families to the border and the most challenging hand-to-hand three-month-long combat with an enemy which greatly outnumbered them -with practically no reinforcements. The actualization of the commemoration of the Battle of Kosare was initiated by the government in 2017.

A few months before the marking of the 22nd anniversary, as part of the search for the missing under the mandates of the Pristina and Belgrade Commissions on Missing Persons, the remains of a Serb volunteer soldier, Zoran Veselic, who died on April 19th, 1999, were found at Maja Glava in Kosare. The remains were taken over in January from Pristina, while a funeral was held in Lacarak near Sremska Mitrovica in early February with military honors.