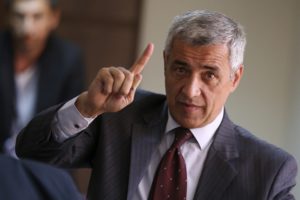 Twenty months after the assassination of GI SDP leader, Oliver Ivanovic, his murder remains unsolved, while Ivanovic’s political legacy in the form of his civic initiative is facing paramount challenges threatened to end up with final collapse.

In early September, the news that Oliver Ivanovic’s longtime associate and party colleague, Ksenija Bozovic, along with another less known SDP member, Svetislav Jokic, would be joining Srpska Lista’s electoral list in the upcoming parliamentary elections in Kosovo shook the public.

Two GI SDP councilors in the North Mitrovica MA, Dusan Milunovic and Igor Rajcic, restrained from the decision to join Srpska Lista. Emphasizing it was Bozovic’s sole decision and they strongly condemned such a move. More than a week after the announcement, however, other SDP members did not publicly comment on the occasion, while it still remains unclear what is the initiative’s remaining infrastructure and potential.

Previously, Bozovic announced that she was summoned to testify in connection with the murder of Ivanovic for the fourth time – the third time before the Special Prosecutor’s Office. Each time she complained the summons as exerting pressure over her. After announcing that she would be switching to Srpska Lista, Bozovic, in an interview with N1, connected this questioning with the Special Prosecutor to her decision to join Srpska Lista, telling this regional media outlet that she hopes the Serbian President, Aleksandar Vucic would now “help her to put an end to the summons”.

Oliver Ivanovic’s secretary, Silvana Arsovic was questioned several times in the capacity of a suspect. Arsovic also spent a night in custody in November.

The prosecutor in charge of Ivanovic’s murder, Syle Hoxha said in April that the investigation was extended to two other persons, without revealing their names. A Serbian portal KRIK later reported that Zvonko Veselinovic and Milan Mihailovic are now being investigated in connection with this case.

Indeed, there has been no significant information on the progress of the investigation, apart from the summons for questioning received by Bozovic and Ivanovic’s former secretary, Silvana Arsovic from the Kosovo Special Prosecutor’s Office, which took over this case from the Basic Prosecution in Mitrovica a year and a half ago.

Out of the five known suspects – which include Arsovic – police investigators, Nedeljko Spasojevic and Marko Rosic are still in custody, while Dragisa Markovic has been released. At the same time, the Kosovo investigative authorities are still searching for the Vice-President of Srpska Lista, Milan Radoicic. They issued a „local“ arrest warrant against him and claimed to have submitted the documentation for an international arrest warrant to UNMIK – which should then be forwarded to INTERPOL.

In the meantime, Milan Radocic has filed a defamation lawsuit with the Higher Court in Belgrade against the president of the European Movement of Serbs from Kosovo, Rada Trajkovic, who outspokenly alerted the public over the past 20 months about the crime in the north of Kosovo, and support to these structures from part of both Belgrade and Pristina authorities. It was again Trajkovic who was the public figure for such the news, so for the second time within a short time period the public was again struck by a twist in the connection to the Oliver Ivanovic’s case.

The Serbian leader Oliver Ivanovic was killed on January 16 in North Mitrovica, in front of his party’s premises when an unknown person/ persons fired six bullets into his back. The assassination took place three months after the local elections in which he faced media and political demonization and labeled as a traitor and destroyer of Serbian unity. He was buried in the Alley of Meritorious Citizens in Belgrade, without a commemoration service at the North Mitrovica assembly, where he was an assembly member.

The two Presidents, Aleksandar Vucic and Hasim Thaci announced several times that the results of the investigation would be made public and provided specific deadlines, however, this has not happened so far.