An advisor to the outgoing Kosovo Minister of Foreign Affairs, Jetlir Zyberaj released the alleged record of the SPS party’s chief executive board session from February 1999, arguing that this document shows, among many other plans against Kosovo Albanians, attempts to conceal the massacre and mass expulsions of Kosovo citizens. Zyberaj estimated that the document should serve as a basis to summon Ivica Dacic to the Specialist Court. KoSSev’s journalists, however, could not find anything in the published document which might be interpreted as an intention to cover up massacres or any other crimes. The record, written in Cyrillic, contains reports on the progress of the Rambouillet negotiations, submitted by the former Foreign Minister, Zivadin Jovanovic, and the former chairman of the citizens’ committee of the Federal Parliament of FRY, Milomir Minic, as well as conclusions from this session.

„This is an official document of the Socialist Party of Serbia from February 17th, 1999. This document of the SPS main board, among many other things plans against Kosovo Albanians, it also contains attempts to conceal the massacre and mass expulsion of Kosovo citizens. This was done with the sole purpose of deceiving the international community and NATO,“ Zyberaj wrote on Facebook.

According to him, this record shows that Serbia’s „anti-Albanian policy when it comes to Kosovo has not changed whatsoever.“

„This document should serve as a basis to summon Ivica Dacic to the Specialist Court. He participated in the planning to hide the bodies of Albanians killed by Serbia during the war. We need to challenge Dick Marty and the Specialist Court on behalf of the war crimes Serbia committed in Kosovo. The mandate of the court is war crimes in Kosovo, which includes this act by Ivica Dacic as part of the joint criminal enterprise of Serbia – as categorized by the International Crime Tribunal for the former Yugoslavia (cf. The Hague Tribunal),“ Zyberaj concluded.

Kosovo media published Zyberaj’s announcement with headlines claiming that the Kosovo Foreign Ministry had issued a document proving that Serbia had attempted to cover up crimes in Kosovo.

Also, Zyberaj recently announced that the Kosovo Ministry of Foreign Affairs would forward “over 10,000 pages of evidence of war crimes Serbia committed in Kosovo from 1998 to 1999.”

It is not known, however, whether the record published by Zyberaj on Facebook was one of them. 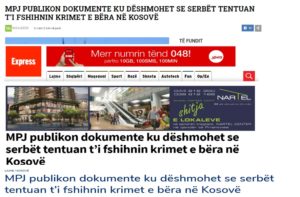 What does the published document contain?

The main item on the agenda of the alleged record of the 96th session of the Executive Board of the SPS Main Board, held on February 17th, 1999, reads: „Information on the progress of talks in Rambouillet (France) on solving problems in Kosovo and the tasks of the Socialist Party of Serbia“.

„The word of mouth information“ about the meetings in Rambouillet was submitted by Milomir Minic and the former Foreign Minister, Zivadin Jovanovic. Minic described the approach of the former Serbian President, Milan Milutinovic in Rambouillet as „brilliant“.

Minic also presented a report on what he described as „obstruction of representatives of Albanian political parties from Kosovo and the cooperation between them and officials of some Western countries, especially the US.“

He said that talks between the Serbian delegation and representatives of Kosovo Albanian political parties „did not occur“ because „neither the Albanians wanted that, nor had the representatives of the Contact Group allowed it“, although the Rambouillet meeting „was convened for that very reason.“

The document reiterates the need for „peaceful resolution of the problems in Kosovo,“ which is one of the conclusions of this meeting on „the most important tasks to be accomplished in the country“.

“(…) Citizens of the Republic of Serbia, the leadership of the RS and the FRY and relevant political parties are unanimous in their position that the problems in Kosovo can only be permanently resolved peacefully, with full respect for the principles of equality of all national communities and the sovereignty and territorial integrity of the RS and FRY“ – reads one of 6 conclusions.

„NATO threats, the USA especially, of aggression against our country only incite terrorists in their criminal activities, so all attempts of aggression must be answered by defense of freedom, independence, territory, with no regard as to who is the aggressor or what is his name.“

KoSSev journalists did not find an explicit reference to massacres or other crimes, nor to the mass expulsion of Kosovo Albanians, in this document.