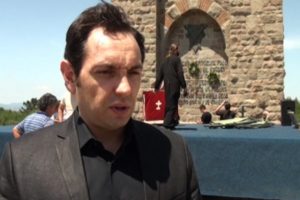 „The next time you criticize me for the delimitation idea, ask yourself if you want to live with the Shiptar terrorist Kadri Veseli, if you want to make peace with him,“ Serbian Defense Minister, Aleksandar Vulin stated today, reiterating his previous statements on delimitation over which the Serbian Military Union filed a criminal complaint against him. In addition, Vulin used an offensive word for Albanians, prompting the National Council of Albanians in Serbia to threaten to file a criminal complaint against him.

Defense Minister Aleksandar Vulin harshly criticized the adoption of the draft resolution on the „condemnation of genocide, crimes against humanity and Serbia’s war crimes in Kosovo,“ estimating that it is Pristina’s attempt to „end any possibility of dialogue.“

„Kadri Veseli, a Shiptar terrorist and an untried criminal, obviously wants to do everything to stop any possibility of dialogue and for Serbia to never be able to talk again because, in addition to seeing that their statehood is not close and that is moving away even further, he sees that sentence for his crimes close is approaching,“ Vulin told the Belgrade-based Tanjug news agency.

He also wondered whether those who criticize him on his stance on the delimitation and who are instead proposing a concept of reconciliation want „Kadri Veseli to put the Serbs on trial for the crimes he himself committed.“

According to the Defense Minister, these people did not meet justice because there is no „firm border.”

He further claimed that the Serbian judicial authorities would be more efficient in prosecuting criminals „the sooner we are divided.“

Vulin estimated that Serbia should give up sovereignty over part of the Kosovo territory because of the fact that Kadri Veseli lives in Kosovo, adding that if Serbia does not do so, we can expect „the arrests of expelled Serbs and Serbs who moved from Kosovo across the world’s borders.“

„This way we can expect for them to issue warrants for those who have survived their crimes. This way we can expect the arrests of expelled Serbs and Serbs who moved from the territory of KiM across the world’s borders. I have a question for anyone who does not have any idea but is attacking anything that is proposed, everything that is said – do you want to live with Kadri Veseli and whether you propose that we reconcile with Kadri Veseli and all Shiptar terrorists,” Vulin concluded.