„Yesterday was a tough day for me. They are killing me with these non-papers. At half-past one, I come to Belgrade and get a new non-paper, it messes with my pressure, otherwise, everything is fine“ – reads the Serbian President, Aleksandar Vucic’s first reaction to the news of the alleged German-French non-paper on Kosovo published yesterday by Koha Ditore.

After spending the last two days discussing the Kosovo issue in Brussels, the Serbian President traveled to Pukovac this morning to get his second shot of the COVID-19 vaccine.

While his blood pressure was being measured at the immunization clinic, Vucic remarked that the new non-paper from Pristina could be a possible cause behind his high blood pressure.

In the meantime, as the Kosovo Prime Minister Albin Kurti was preparing for his trip to Brussels, Pristina-based Koha Ditore published, as exclusive news, the alleged German-French non-paper containing the solution to the Kosovo issue.

The denials arrived from Germany and France this morning.

„The so called ’German-French non paper’ published by Koha Ditore is fake news! There might be a paper but it’s for sure not a German-French one. Our full support is for the EU-led dialogue led by EU Special Representative Miroslav Lajcak as German FM Maas again underlined last Thursday in Pristina,“ the German ambassador to Pristina, Jorn Rohde tweeted.

The French embassy also sent the same message, albeit in a slightly milder tone.

The alleged document implies „independent, sovereign, equal states with their international borders“, – „according to international law“.

The document also calls for special status for the Serbian Orthodox Church. According to this document, the protected zones should include more than 40 churches and cultural sites.

Koha Ditore emphasized that it failed to get confirmation of the authenticity of this non-paper, noting „some diplomats that Koha contacted more or less confirmed that the points mentioned in it were in line with what is expected to be discussed in the dialogue.“

The Serbian president has yet to officially comment on this document, however, he has repeatedly denied that he knew anything about another non-paper – the so-called Slovenian non-paper allegedly sent from the office of the Slovenian Prime Minister Janez Jansa. This non-paper also contained a solution for Kosovo – the unification of Kosovo and Albania, while northern Kosovo would get a special status, following the example of South Tyrol.

Deimel: Nobody, including Berlin officials, knows about the non-paper, perhaps it is a test balloon 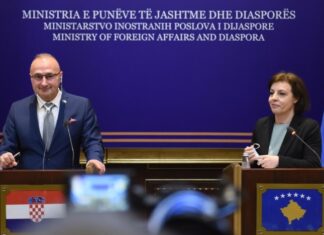