„By doing what they did yesterday they are forcing Serb policemen in the north to become worse Albanians than the Albanians themselves – which they don’t want to be – and their ultimate goal was the arrest of Commander Bojic,“ the Serbian President Aleksandar Vucic shared his view on the „ultimate goal“ of yesterday’s Kosovo Police operation, during which a number of alleged members of organized crime groups, including police and customs officers, were arrested.

Vucic claimed that it is all „an abuse and an attempt to make Serbia the wrongdoer,“  adding that “this is the hundredth thing they did, starting from the mistreatment and arrest of Marko Djuric, repeated intrusions to allegedly arrest the killers of Oliver Ivanovic.“

„Then they told me in Brussels that this was done in order for someone to move out of the north of Kosovo,“ the President of Serbia shared with the public what he „heard from the Albanian leaders“.

„They are not hiding it, they know that amongst themselves,“ he estimated.

Vucic thinks that the „ultimate goal“ of yesterday’s actions of the Kosovo police was the arrest of the head of the Kosovo Police Operations for the North Region, Zeljko Bojic.

According to the President, the operation was conducted „just to prevent Serbs from being Serbs, because you can only be a Serb if you follow and obey Haradinaj and if you have nothing to do with Belgrade and Serbia, such are some of his Serbs – pets and those one out of five billion and millions, I do not know how many, who are voting for Gonxhe Caushi or saying that I should have supported that action.“

The Serbian President said that „for a long time there has been no trust in the honor of the people sitting at the table and lying to you.“

He claimed he was told by both “the Albanians and the Europeans” in Brussels that the taxes would be abolished in seven days.

Vucic also shared his belief that „many in Serbia“ will now accuse him of being guilty of „being lied to by both Albanians and Europeans“.

„I’m guilty of not being a liar, but they are liars,“ concluded Vucic.

He added that this does not mean that he believed them, stressing that there were several witnesses who heard when they said that the taxes would be abolished.

Asked to comment on KFOR’s spokesperson, Vincenzo Grasso’s, statements that the rhetoric of the leaders and the abuse of the media are the biggest threats at this moment, and that everyone was informed about yesterday’s action of the Special Kosovo Police units, including the government in Serbia, Vucic replied:

„Let him say who informed him about it. We received intelligence information about this around May 15th, and I revealed that to the public around the 17th. That’s 12-13 days. I publically begged them not to do it. Regarding the rhetoric they are talking about, they are not status neutral at all, they are dealing with rhetoric and tricks.“

He called on the KFOR spokesperson to say who informed him, „because he did not even want to talk to Mojsilovic yesterday. Then we did not want to talk anymore. And they talked around half past 11 or 12h – when I told them to get in touch. But there was no contact during the crisis. Mojsilovic can also confirm this.“

Serbia will preserve its people, protect it, and will not sit with its hands crossed. That expert can lie as much as he wants, about whatever he wants, and General Mojsilovic and Defense Minister Vulin can say what kind of contacts there were and whom they informed

„The last time I said they were lying, this time I’ll say they are not telling the truth. And this is easy to confirm, you can easily prove it, show it,“ the President concluded.

„They may think that if they informed someone from those five million that they notified the state authorities – they did not. Or one of the bishops, they did not inform us. We got this from intelligence sources,“ Vucic said.

Police action in the north and south: Police arrested Serbs, Bosniaks and Albanians, including senior officers, suspected of being part of an organized criminal group 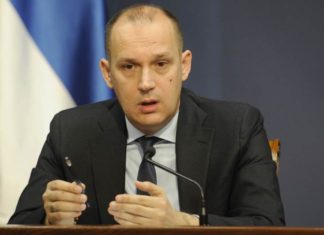