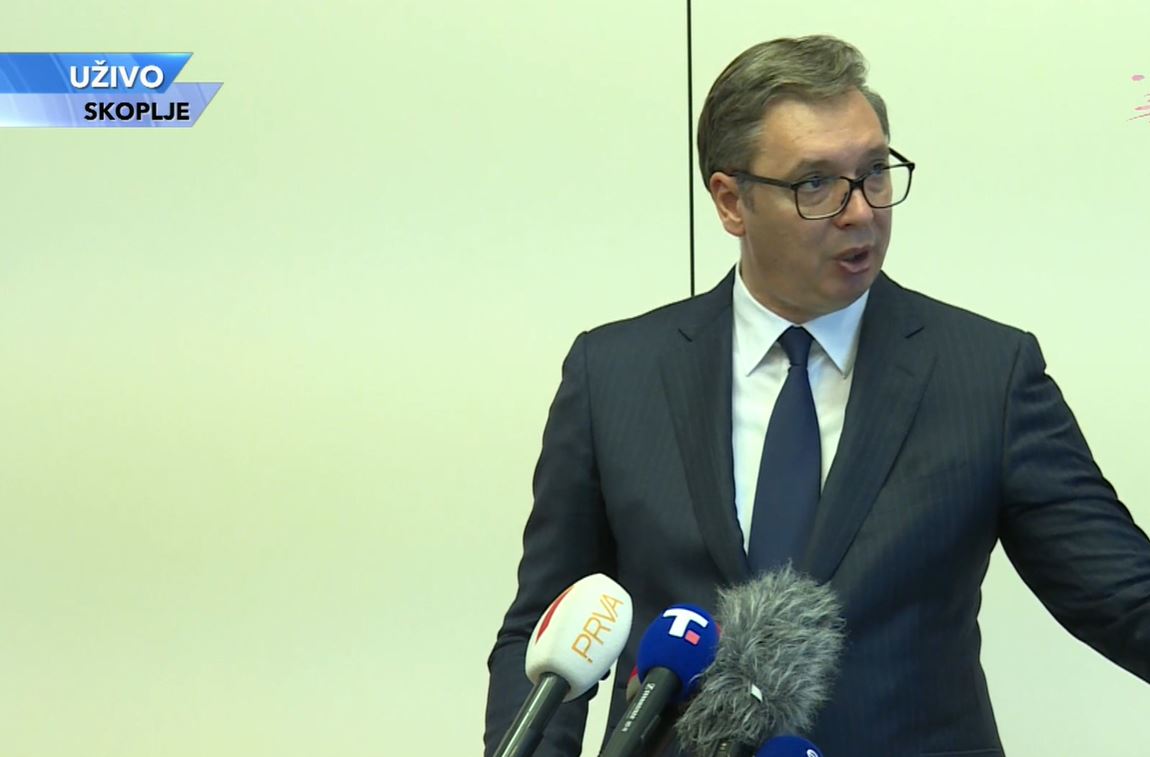 „We had a good laugh when we heard that, but the fact that they have such a high opinion of themselves is a good thing,“ the Serbian President, Aleksandar Vucic, commented on the Kosovo government’s decision to reject the initiative known to this day as Mini Schengen following today’s regional economic forum of Serbia, Albania and North Macedonia in Skopje.

Today, the initiative of the three countries known as Mini Schengen was officially presented as the Open Balkan initiative, with the goal of opening the borders between the Western Balkan countries by 2023 – with no wait time at the borders.

This idea was presented to the public in Ohrid two years ago by Serbian President Aleksandar Vucic, Albanian Prime Minister, Edi Rama and Macedonian Prime Minister Zoran Zaev, who signed a joint declaration on regional cooperation to „remove all obstacles to the free movement of people, goods, services and capital.“

During today’s summit, as well as at the follow-up media conferences, numerous messages were sent on the support of the three leaders to cooperation and economic development, as well as the future – which these leaders turned to, as opposed to those who remain stuck in the past.

In a special address to the Serb media, Aleksandar Vucic reiterated from Skopje that he feels sorry for those who did not support the Open Balkan idea and remained stuck in the 1990s.

„Kurti said that Edi Rama is a Serb collaborator, but that says a lot more about Kurti than it does about Edi Rama. I believe that Rama is doing good things for his country and people, and the fact that Kurti doesn’t understand this and that he thinks that it is time to gain space via chauvinistic messages – by closing Pristina instead of opening it, through threats and blackmail, instead of cooperation – that he thinks that he will get to more places, I think he is wrong,“ the Serbian president pointed out.

According to Vucic, Kurti’s arguments are best explained through Obradovic’s words (cf. Bosko Obradovic). As Pink journalists reminded the president, Obradovic claimed that the cooperation between Serbia and North Macedonia is in the service of the Greater Albania project.

„I really appreciate Mr. Obradovic and I value his opinion, but unfortunately, I am afraid that he does not understand,“ Vucic added.

He announced that economic cooperation with North Macedonia last year alone amounted to 867m euros, 670m of which concerned exports from Serbia, noting that politicians must understand how important the duty-free export of those goods actually is.

Vucic further explained that it is common for „hysteria“ to come about in the „lobby of great ideas“ – as was the case through history. He also added that support for the Open Balkans initiative will increase in Serbia, as well as in other countries in the coming years.

In his words, in the next 200 years, Serbs and Albanians will certainly be the two largest peoples in the Western Balkans, no matter how small they may be. The Serbian president explained that the two nations must improve their relations, adding, however, that at this point talking to Pristina has become impossible, namely because of Kurti, who is “a man who thinks that he is the Messiah and Jesus Christ, and that history counts on his coming to power.”

„This is a look into the future. This is the first time that we are seeing it by ourselves, without pressure from outside, what we can do for ourselves. That is why it is almost a revolutionary idea and that is why I understand that many are against it, both within the EU and some other countries. Americans are not as bothered by it; on the contrary, they even support it. It bothers some because we dared to make decisions on our own behalf and our citizens,“ said Vucic.

In its first reaction after the Skopje summit, apart from announcing that Kosovo did not approve the initiative that Serbia, North Macedonia and Albania have been promoting for the third year in a row, the Kosovo Prime Minister’s Office pointed out that Kosovo was reportedly not invited to the meeting, while also alleging that the initiative lacks a vision for the region. Kosovo officials have continuously repeated that they share the same views. From the beginning, the current Kosovo Prime Minister Albin Kurti has been one of the strongest opponents of the Mini-Schengen, claiming that it is an attempt at Serbian hegemony through the creation of a „fourth Yugoslavia“.

Self-determination from Tirana: On this day in 1913, only half of the territory was recognized as independent Albania, Rama violated the rights of Kosovo and Albanians today

The term „Serb collaborationist“ was used today by Boiken Abazi from the Self-Determination Movement in Tirana. Abazi said in a Facebook post that today’s signature of Edi Rama will remain in history – as the signature of „collaborationist prime minister on Serbia’s expansionist plans.“ He furthermore claimed that Rama is placing Albania „under the economic domination of Serbia, thus further impoverishing it.“

„With these agreements, Rama is attempting to sabotage the attempt to bring Serbia to justice and for it to be held responsible for the genocide it committed against the Albanian people, which is now cleaning up its image internationally and normalizing aggressive politics for which it has never apologized,“ he said.

„By signing (cf. these agreements), Rama violated the rights of Kosovo and the entire nation,“ the activist from Tirana added.

Abazi also objected to the date of the signing of the Skopje agreements. He reminded that on this day 108 years ago, at the London Conference, it was decided to „recognize only half of the territory as an independent Albania, thus leaving over 40% of the Albanian people outside the borders under pressure from Serbia and Greece.“

„The decisions made at that conference created a historical injustice that the Albanian people have suffered to this day,“ Abazi said.

Rama: Those who live in a parallel world think that this will resurrect Yugoslavia

„Whoever says that this initiative was drafted in the former Yugoslav cellars in order to resurrect the former Yugoslavia, to give hegemony to Serbia because it is the most powerful country in the region and that it will take everything away from us, I think that the man who is saying this lives in some parallel world and that he lives to lead politics off the backs of citizens, and not for the benefit and improvement of life,“ Albanian Prime Minister Edi Rama said at the forum in Skopje today.

„I know what Kosovo is thinking and that is why I have an absolutely opposite position and I believe that all countries must be part of this process and give their best to improve and advance this process because it is for the good of their countries and citizens and each part of their system. Every lost day is a day of looking back. In the name of conflicts, wars and all unresolved issues between us, all these unresolved issues will not be resolved more easily between us if we reject the potential of such a partnership,“ the Albanian Prime Minister said.

He described the assessments that Serbia is trying to „reach the sea“ through this initiative as narrow-minded.

Stressing that the past must not dictate how the Balkan peoples progress economically, he criticized the „patriots of Albania“:

„The patriots who are talking about the railway. Which railroad are they talking about? Which international investors will throw away so much money needed to build one railway if the train only travels to destinations within one country. Then they said – well, that train can run towards Pristina… and who will get on that train?!“

For Albania, this initiative is strategic, Rama emphasized.

We will continue with all our strength to move forward toward the goals we set so that this system for the flow of goods, capital, services is the same as the one in the EU, Rama said in Skopje today.