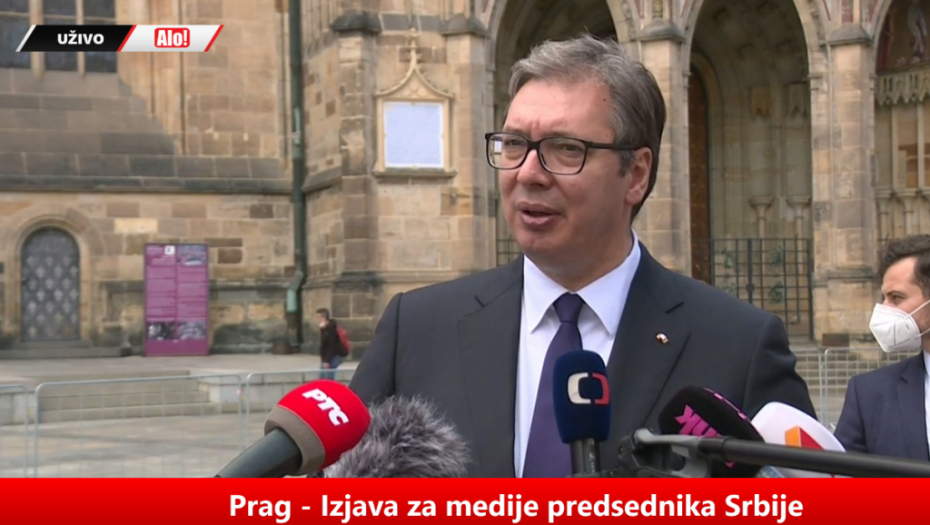 Zeman’s statement is historic, but it is also proof that the ball has begun to unravel – the President of Serbia, Aleksandar Vucic said after his Czech counterpart declared that the bombing of Serbia in 1999 was a mistake and asked the Serb people to forgive him. Vucic also commented on Pristina’s request to Europa Nostra to remove Visoki Decani from its list of endangered sites. „No one can and has the right to endanger Visoki Decani, and we will fight and, if necessary, provide all kinds of assistance,“ he said.

„He is the first current president who spoke openly about the 1999 attack on Serbia, the bombing of Serbia, and that means a lot to us, and that brings the Czech people and the president closer to the Serbian people and shows that we will need a lot of energy and effort to show friendship,“ the Serbian president said after meeting with the Czech president yesterday.

In his words, Zeman is a legendary politician „who has a mind of his own to express his views that differ from popular public opinion“.

He entered the history of Serbia with what he said today; for Serbs, he is a man who has courage

According to Vucic, there will be more presidents in the future who will be able to say what Zeman said yesterday. He described the Czech president’s statement as the start of „the ball unraveling“:

„Moral people and the most courageous people started talking about what was happening, and what they did not agree with, and what was, I would say, the dictate of the greatest powers of that time,“ said the President of Serbia.

He confirmed that he also discussed the ongoing Brussels dialogue with Zeman, who publicly stated on several occasions that „the recognition of Kosovo was a mistake“.

„I spoke to him about our desire – to reach a compromise solution, but also about the fact that it takes two to tango, that we need people who want to make an agreement.”

He revealed that he asked Zeman for the Czech Republic’s support for the Belgrade-Pristina dialogue – which, in his words, he received.

The Serbian president stressed that he was not “feeling optimistic” after the Monday Brdo-Brioni summit.

The President of Serbia also commented on the request of the Pristina government officials for Europa Nostra to remove Visoki Decani from its list of the seven most endangered monuments.

I don’t know which monument is more endangered than Visoki Decani in this part of Europe – he underlined.

„There is no doubt that not only the Serbian Orthodox Church, even if we think differently on some issues – but also Abbot Janjic and everyone else will always have the support of the state of Serbia and we will try to explain the position of Visoki Decani, disrespect of court rulings of Pristina and violations of domestic and international law norms on that issue,“ the president said.

The letter speaks of the „arrogance“ of Pristina officials and nothing else, he argued.

„No one can or has the right to endanger Visoki Decani and we will fight and, if necessary, provide all kinds of assistance, not only legal and political but also other types of support to the monastery of Visoki Decani and our clergy that live there,“ he underlined.

„The unsolved murder of Ivanovic is a disgrace for Belgrade, Pristina,...