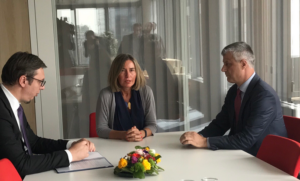 „The High Representative will continue discussions with the two Presidents on the comprehensive normalisation agreement with a view to making concrete progress, given the priority attached to the EU-facilitated Dialogue between Belgrade and Pristina and the European Union perspective of the region,“ reads the statement from Brussels.

Vucic and Thaci met yesterday at the European Forum Alpbach, which was also attended by EU officials and officials from the region.

The announcement of the latest Belgrade-Pristina talks within the Brussels dialogue arrives in the midst of media reports and political statements on „delimitation“ between Serbs and Albanians – advocated by Vucic, i.e. „border correction“ and joining three municipalities of the south of Serbia to Kosovo – advocated by Thaci. These ideas are interpreted, in the public, as „partition“ and „exchange of territories“ between Serbia and Kosovo.

Until now, there was no concrete reaction to the presidential ideas from official Brussels, while official Berlin said that the borders in the Balkans will not be changed.

The US government confirmed on Friday that „the United States does not exclude territorial adjustments between Serbia and Kosovo“, which is a new direction in relation to earlier reactions from Washington, which used to oppose such ideas.

The last high-level talks within the framework of the dialogue were held on July 18th.