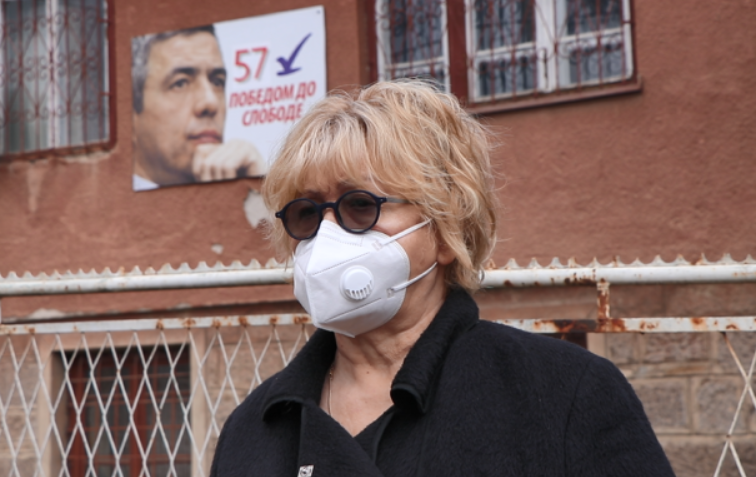 The campaign for Kosovo’s extraordinary elections is heating up. The elections are scheduled to be held in a matter of days.

Kosovo Serb politician and candidate for the civic initiative SPO Rada Trajkovic launched a pre-election campaign today from the site of the murder of Oliver Ivanovic in North Mitrovica.

This marks the second time Trajkovic launched an election campaign at the site of Oliver Ivanovic’s assassination -her first time in 2019.

In an interview with KoSSev this morning, it was asked why she starts from there, Trajkovic says:

“It is the only plot of free land in the north of Kosovo. A place where you can come so that they don’t chase you, beat you, where you can speak freely. This is a reminder of a man, a leader who has already gone down in history, and his death marked the boundaries of the free north of Kosovo. Unfortunately, these boundaries are small, but I expect that they will expand, and even with these elections, that the free spirit of the citizens of the north will still win somewhere,“ Trajkovic told KoSSev.

The GI SPO list consists of three candidates – its leader, Milan Dabic from Gracanica, Trajkovic herself, and a candidate from Strpce, Cvetko Veljkovic.

Trajkovic accused Srpska Lista of leading a „dirty campaign“ and restricting the freedom of other political options representing the Kosovo Serb community. She further alleged that there is a „mental darkness“ among Serbs in Kosovo, adding that the success of her initiative depends on whether this darkness will be lifted.

The campaigns of the two civic initiatives (SDS and SPO) have not been particularly visible to the public so far.

Trajkovic claims that „freedom is restricted by the supporters of the indoctrination of SL.“

„Running a campaign is very difficult. Citizens are afraid for their existence, future, we know that the Serb employers, and all appointments from Kosovo, come from Radoicic (Milan, vice president of Srpska Lista). All the existing structures were set up by him,“ she said.

Milan Radoicic even told me at trial ‘you envy the fact they beat you with a huge difference in Kosovo’, which I found very peculiar – that I could think he is so powerful

While comparing this campaign to the previous one, Trajkovic reiterated that the elections are not free due to the „indoctrination“ allegedly carried out by SL with the help of Serbian national broadcast media.

Trajkovic recalled that a member of GI SPO from Strpce, Cvetko Veljkovic, together with a politician from central Kosovo, Nenad Rasic, accompanying the leader of LVV, Albin Kurti recently visited Strpce as part of the campaign. She voiced satisfaction over the fact that the visit passed without any incidents.

„It was a message that hatred is no longer a slogan, a brand in Kosovo and that there are forces that can work and present themselves together, solving basic problems for citizens, such as the problem in Strpce – an attempt to destroy the entire ecosystem and expel citizens from the Shar mountain.“

When asked to share her expectations for the turnout, Trajkovic said:

The moment the President of Serbia delivers Veselinovic, Radoicic, and Bojic to Pristina institutions, darkness will rise from the Serbian population in the sense of single-mindedness, violence, and lack of freedom of expression of Serbs, until then we will bear witness to this reality and situation

Speaking of co-operation with other political options after the election, Trajkovic says that she will co-operate primarily with any party legally elected by Albanians in Kosovo, while also announcing a possible coalition with Albin Kurti-led Self-Determination movement.

„I believe that Mr. Kurti dominates at that level in terms of support he has among Albanians, but of course, Mr. Kurti cannot do it alone, so a coalition will be likely in the future,“ Trajkovic added.

Trajkovic expected for SL to be brought to justice by now over the pre-election video broadcast in 2017 on TV Most and Pink, in which Oliver Ivanovic was portrayed as a „dishonest man“ and a „traitor“:

„If SL, which is supposed to be part of the process against Oliver, in terms of what it did with the video, says – who made the video, who sent the video to TV Most, who broadcast it, who paid for that video – I would say – what kind of structure SL has within itself – a security one that followed Oliver Ivanovic and filmed him. Whether the mafia actually has its own security structure – at that level, did the BIA film Oliver, whether a structure within the SL – paramilitary, parapolice, para-party has power,“ Trajkovic said.

She added that all these questions need to be answered:

„And then we will lead much better lives and live more freely. Oliver gave his life for that freedom.“

SDS and Petkovic: Staying out of the public to avoid threats and pressure