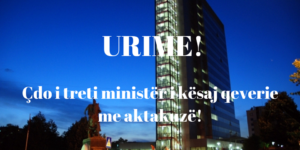 The newly-appointed Minister of Interior, Ekrem Mustafa, is the seventh Kosovo minister to be prosecuted by the authorities, Kosovo media reported. Next to these seven ministers, two deputy ministers, some members of the Kosovo Assembly and a number of Kosovo mayors have also been charged with various offenses – abuse of office, possession of weapons, illegal employment, and now – causing a traffic accident. Kosovo citizens „are sick and tired of such scandals“, Kosovo media reported and published the latest ‘greeting card’ that is being shared via Facebook: „CONGRATULATIONS! Every third minister in this government has an indictment!“

Kosovo media reported that newly-appointed Minister of Interior, Ekrem Mustafa is also awaiting trial. He is charged with causing material damage and a traffic accident in which two people were seriously injured, while one person sustained slight injuries.

Kosovo officials have not reacted to this news so far.

The citizens, however, reacted by posting on Facebook that „in a normal government he would be dismissed from the office” and sent a satirical message to Kosovo politicians: „You have to be prosecuted in order to become a minister in this government.“

A third of the leaders of the government headed by Ramush Haradinaj are being prosecuted by the Kosovo authorities. Kosovo’s judicial authorities have indicted seven out of the 22 ministers in the coalition supported by Srpska Lista on suspicion of abuse of position, possession of weapons, illegal employment, and now of causing a traffic accident. The latest indictments were also issued against two deputy ministers.

Deputy Prime Minister and Minister for Diaspora, Dardan Gashi, and the Minister of Trade and Industry, Endrit Shala – before his appointment, were charged with unauthorized possession of weapons. Minister of Infrastructure, Pal Lekaj, Minister of Innovation and Entrepreneurship, Besim Beqaj, the Minister of Economic Development, Valdrin Lluka, and Minister of Security Forces, Rustem Berisha, were prosecuted as well. However, Lluka was acquitted and his case was sent to the Appellate Court.

The former director of the Inspection Directorate of Prizren municipality and the current Deputy Minister, Bujar Nerjovaj, and the Deputy Minister of Regional Development, Musa Cena – both members of Ramush Haradinaj’s party – AAK, were also prosecuted.

Some members of the Kosovo Assembly and Kosovo Mayors have also had problems with the law.

Haradinaj: The ministers are not appointed by the Prime Minister, but by the parties with which I am in coalition

When asked whether he will dismiss the accused persons,Kosovo Prime Minister, Ramush Haradinaj, said that ministers „are not appointed by him, but by the parties with which he is in the coalition“; despite the fact that officials from his party are among the prosecuted.

European Union Special Representative in Kosovo, Nataliya Apostolova, called on the officials accused of corruption to leave the state institutions.

She requested the adoption of the law which would prohibit persons against whom indictments were issued to perform public functions, as well as a law on the confiscation of property of persons found guilty of illegal property acquisition.

Read more about other Kosovo government officials and prosecutions in the following news:

A new indictment against high-ranking official in Haradinaj’s government