Following Kosovo Prime Minister, Ramush Haradinaj’s announcement that „temporary wholesale outlets“ would be opened in the north, two trucks containing a small number of basic products for sale were parked on Monday afternoon near the railway bridge on the north side of Mitrovica. Kosovo Minister Endrit Shala stayed in Mitrovica on the same day to oversee the opening of „mobile outlets.“

Two trucks were parked on Monday afternoon in front of the former North Mitrovica administrative office, which is located right next to the railway bridge on the north side of Mitrovica. The trucks had Kosovo registration plates and an inscription „Viva fresh store“. They were open – and at the moment the KoSSev team arrived on the field – contained a smaller number of goods items.

The small team rallied around the trucks, carried an invoice stating that the value of the goods was about EUR 6400. As they told KoSSev the goods were intended for sale in the north.

A Kosovo Tax Administration officer approached the trucks, showed her ID, and asked for the invoices.

While the person in charge of the goods showed her the invoice, a man dressed in plain clothes approached, claiming to be a policeman. He told the tax officer that she can address her questions to the Ministry of Trade and Industry. The tax officer then asked him to show his ID – as she did earlier – which he did not do.

When the tax officer asked whether it was a humanitarian aid shipment, she was told that it was goods for sale.

A number of police vehicles were noticed in the vicinity of the truck.

Gashi: The Kosovo government sent goods to the north today

The Kosovo government spokeswoman, Donjeta Gashi confirmed the information that trucks with goods were planned to be sent to North Mitrovica yesterday.

In addition, she confirmed that the decision to send goods to the north was made at the Monday’s meeting of the government, and that it will, in her words, “provide the citizens in the north the opportunity to buy (the goods),” adding that this was coordinated by the Ministry of Trade and Industry.

Shala: Mayors from the north were informed about goods being sent to the north

As Pristina-based Koha reported, Kosovo Trade and Industry Minister, Endrit Shala visited North Mitrovica the same day in order to oversee the opening of the mobile outlets.
Shala said that the mayors of municipalities in the north were informed about this decision of the Kosovo government.

„The Government of Kosovo and the Ministry of Trade and Industry, in cooperation with the Ministry of the Interior and other Kosovo institutions, in support of our companies dealing with the sale of food products in Kosovo, have organized an action that will provide the citizens in the north of Kosovo with an opportunity to purchase necessary food products,“ Shala said, Koha reported.

N1 TV published a video showing Endrit Shala, in the region of southern Mitrovica, standing beside the truck with the goods and talking to the heads of the Kosovo Police for the region north – Commander Nenad Djuric, the deputy commander, Besim Hoti and the chief of operations, Zeljko Bojic.

„I do not see any kind of solution, without some problems which will happen,“ said commander Djuric. 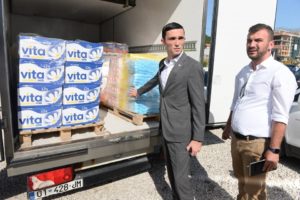 There were noticeably fewer people than usual in North Mitrovica yesterday. Shops and all other service-related facilities are closed, taxi services are suspended and only a few passersbys could be seen on the street – and a horse standing in the middle of the pedestrian zone. His owner says that, in the absence of taxi service, he uses the horse as a means of transport.

Bosniak Mahala, one of the busiest streets in the north, is empty and traders closed their shops earlier than usual. 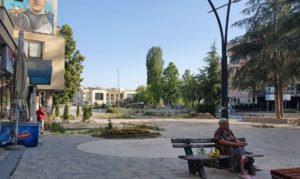 “The Kosovo government will protect citizens in the north. We will open wholesale outlets together with Kosovo businesses”, the Kosovo Prime Minister, Ramush Haradinaj posted on his Facebook profile yesterday.

The Kosovo Prime Minister announced that the Kosovo government, in close cooperation with the business community and all relevant institutions, will organize the opening of temporary wholesale outlets in the north of Kosovo – as a response to what Haradinaj assessed as a „simulation of humanitarian catastrophe“ by Serbia and another „destabilization attempt.“

This is the Kosovo government’s response to the two-day closing of shops and other service-related facilities in the municipalities of the north. As the Association of Entrepreneurs from the north and Serb officials claimed, the shops are closed in protest against Haradinaj’s decision to introduce a 100% tax increase on products from Serbia.
In the past few days, the stores in the north suffered a shortage of goods as a result of the cessation of the procurement of goods from Serbia and the simultaneous boycott of Albanian distributors by Serbian traders. Shops will be completely closed today and tomorrow as a form of protest against the 100% tax on the import of goods from Serbia and Bosnia and Herzegovina introduced by the Kosovo government last November.