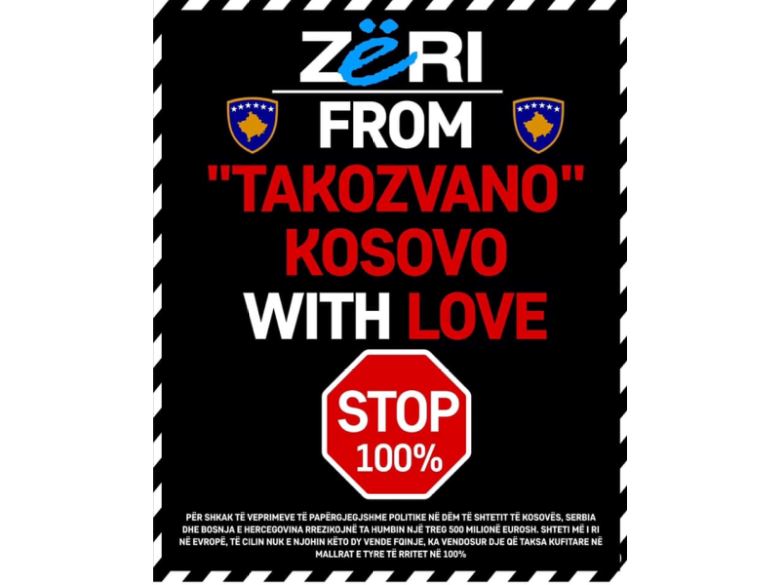 The front page of Pristina-based newspaper Zeri from today reads: „From ‘Takozvano’ (so-called) Kosovo with Love“, „Stop 100%“. This newspaper expressed support for the increase in import tax on products from Serbia and BiH. „This front page is not neutral towards Serbian goods. It is high time for a counter-response to Serbia as a state,“ they posted on Zeri’s official Twitter profile.

This front page is not neutral towards Serbian goods. It is high time for a counter-response to Serbia as a state.

Pro (for) 100% tax on goods from Serbia and Bosnia, let’s favour domestic products.

The description of the cover of this influential Pristina newspaper also reads:

„Serbia and Bosnia and Herzegovina risk losing a market of 500 million euros because of irresponsible political actions damaging to the state of Kosovo. The youngest state in Europe, not recognized by these two neighboring countries, has decided to increase customs tax on their goods to 100%.“

Today’s edition has attracted the attention of the deputies in the Kosovo Assembly, the same newspaper reported.

A great number of citizens also commented on the homepage on Zeri’s Facebook page:

„Astrit Dehari and many activists have been arrested for protesting and opposing every Serbian thing, you have woken up now, idiots, and you will wake up around 2030 and realize that demarcation with Montenegro was a mistake, dummies.“

„It’s hard for you to understand and accept, but that day will come. Albin Kurti 2010… “

„It would be better if our authorities develop the economy, to create an economically strong country, than to deal with Serbia. Serbs should have over time not been allowed to come in and go out, not for a wedding or for a funeral.“

„Bravo for the front page of the newspaper. The words of Father Enver: ‘I WILL EAT GRASS BUT I WILL NOT EAT MY PROMISES“, are you saying that our people are keeping their promises?“

Jako nevreme u Srbiji, i na Severu vetar i kiša