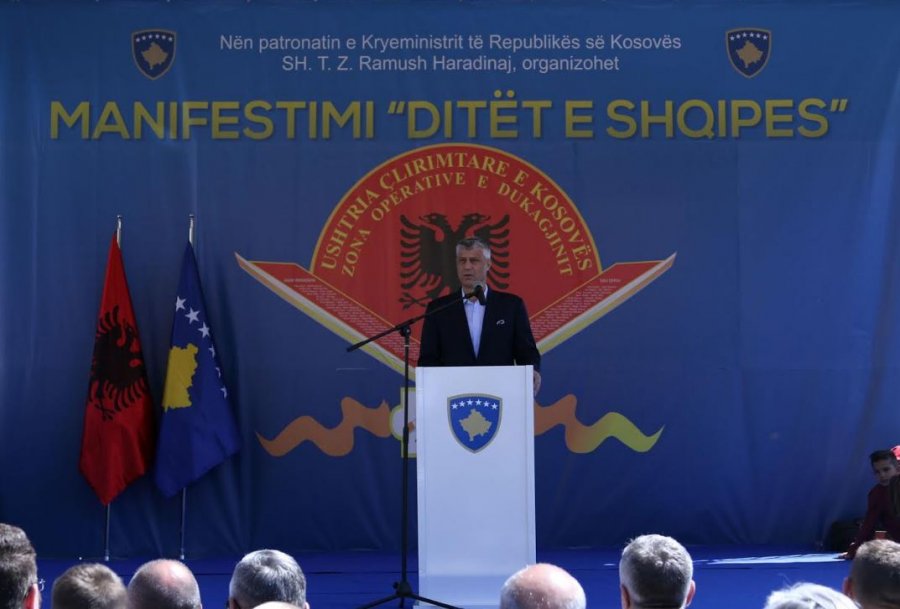 Source:  Koha  (An excerpt from the text was originally translated from Albanian)

Kosovo President Hashim Thaci paid tribute to the killed at the Kosare graveyard and participated in the memorial gathering, within the traditional "Days of Eagle" event, in honor of the Kosare Battle.

Thaci also mentioned threats from Serbia, saying that "We will respond to these threats just like we did 19 years ago – with guns", Kosovapress reports.

"We recall the glorious war of the boys and girls who widely joined the ranks of the Liberation Army upon the announcement of general mobilization by the KLA headquarters. The KLA testified the fact in Kosare that it had entered a higher phase of resistance. With human and technical capabilities it was able to confront the Serbian forces via a frontal war. As a result of tactical and strategic preparations, with acts of determination and courage, unprecedented, an historic victory was achieved –  a pyramidal stone border that for ages divided  Albanian countries has collapsed, " said Thaci.

"In spite of the challenges, Kosovo is a state building success  story and we are grateful to friendly countries that supported us even in the stages of internal consolidation and international affirmation." Kosovo continues to persevere in the direction of Euro-Atlantic integration," he said.

Thaci added that Kosovo's independence has become a factor of peace and stability in the region, despite the fact that the neighboring state of Serbia still makes it difficult for UN membership and that of other international organizations.

Thaci said that Kosovo has no alternative orientation other than Euro-Atlantic integration.