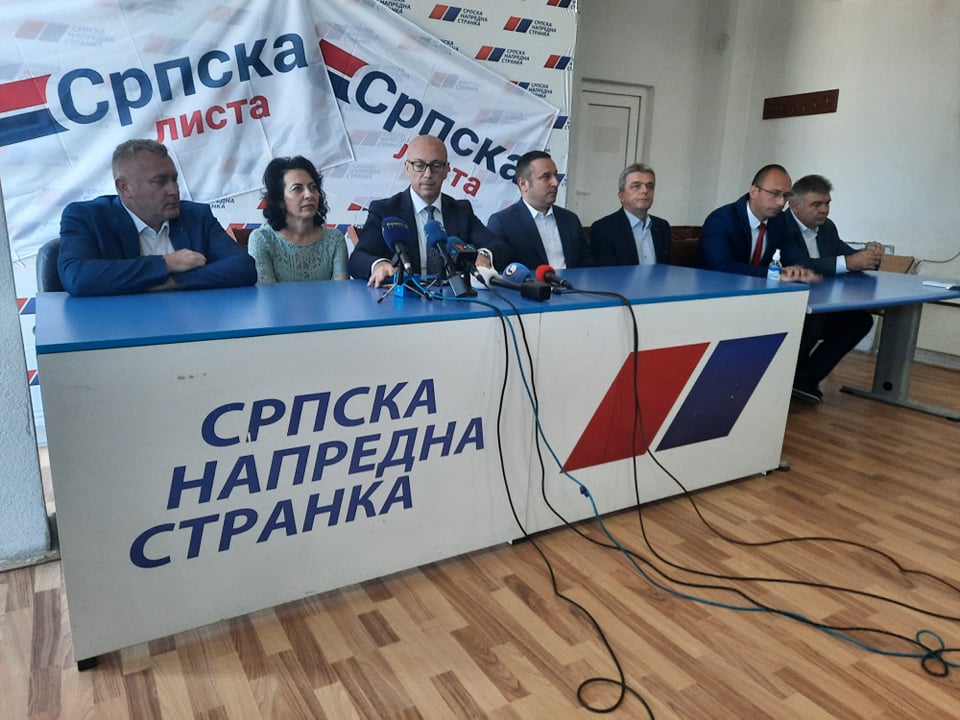 „As you have witnessed, we (cf. Srpska Lista) strived to defend our national interests as honorably as possible. It is up to us to continue to do the same in the future,“ the mayor of Gracanica, Srdjan Popovic, said in Gracanica today.

Local elections are scheduled to be held in Kosovo on October 17th. Srpska Lista submitted its candidates for mayors of 11 municipalities on Saturday. This largest Kosovo Serb party will have over 400 MA councilor candidates in 22 municipalities.

Srpska Lista held a press conference in Gracanica this morning, which was also attended by SL’s candidate for the mayor of this municipality, Ljiljana Subaric, who did not address the public. SL officials also refused to answer journalists’ questions, although the event was covered by numerous media crews.

„SL will continue to gather Serbs under one flag, and defend our survival under this flag. It will defend our people in a way that is worthy of our people because we all know what Kosovo means for us and our country so that our people can survive here and have a future,“ Popovic said at the press conference today.

The current Gracanica mayor once again reiterated that SL endeavored to create a strong bond with official Belgrade and the Serbian President, Aleksandar Vucic.

Popovic warned that the unification of the Albanians would be „quite difficult“ for the Kosovo Serbs, stressing this as the reason why the policies of Serbia and its president Aleksandar Vucic on Kosovo should continue to be implemented.

The conference was also attended by the president of the Serbian sponsored provisional authority of the municipality of Pristina and a member of the Kosovo Assembly, Ljubinko Karadzic, who is also the relative of Branimir Stojanovic – another candidate for the mayor of Gracanica.

„There must no divisions, and we must be united“ – Karadzic emphasized, adding:

Rakic: Something unprecedented took place in the political life of Kosovo Serbs, someone wants to divide the Serb people

Kosovan Minister and Srpska Lista chief, Goran Rakic, said that „something unprecedented took place yesterday in the political life of Serbs in this area.“

„Something very dangerous and something that goes beyond the issue of party and political struggle,“ Rakic alerted.

„A Serb, our former member, attacked the only Serb member, that is, a judge in the Constitutional Court of Kosovo, a true professional, someone who is credible and who is recognized by Serbs and Albanians and the international community,“ Rakic ​​thus described the judge of the Constitutional Court of Kosovo, Radomir Laban, who was criticized yesterday by another candidate for the mayor of Gracanica, Branimir Stojanovic.

SL chief then proceeded to question what motives lie behind Stojanovic’s comments on Laban.

„The only way I can understand this is as his sick, unhealthy struggle for power, his personal interest, and the interests of who knows who else. Trust me, soon we will all know in whose interests he did this and who is standing behind him,“ warns Rakic.

Stojanovic’s statement “drew a target” on judge Radomir Laban, and even jeopardized his life – Rakic furthermore claimed, noting that Stojanovic himself knows that the decision on the cadre is made in consultation with official Belgrade – as was the case with Ljiljana Subaric’s candidacy.

In the past, whenever Serbs were divided – it did not go well for them, Rakic underlined, alleging that Stojanovic is “wishing harm” to the Serbs by attempting to divide them.

While Albanians are uniting, he is trying to divide the Serb people

In Rakic’s words, life in Gracanica and life in the north of Kosovo greatly differ, which is why „unity is a must“ and divisions are the last thing the Kosovo Serbs need.

In the end, however, the chief of Srpska Lista still claimed that he „does not want to attack“ Stojanovic.

The news broke yesterday that Branimir Stojanovic submitted his candidacy for the head of the municipality of Gracanica to the Central Election Commission.

Branimir Stojanovic is the former mayor of Gracanica – a post he stepped down from when he became the Deputy Prime Minister of Kosovo. He was one of the most prominent members of Srpska Lista until the 2017 Kosovo parliamentary elections.

At the time, speculations ran rampant that Stojanovic was marginalized from SL by political will from Belgrade. He then took over the post of State Secretary in the Ministry of Economy of the Republic of Serbia in January 2018. At the end of last year, he was appointed head of the provisional authority of Suva Reka.

He is one of the de facto founders of the SNS in Kosovo, that is, the former GI Srpska Lista.

There are still no detailed information on who, apart from SL itself and the „independent candidate“ Branimir Stojanovic in the municipality of Gracanica, registered for the elections to represent the Kosovo Serb community.

However, according to unconfirmed information, other „independent“ candidates and „civic initiatives“ could join Stojanovic on this so-called second front – „opposite“ Srpska Lista.

Although the formal start of the campaign is still a long way away, strong political messages have started coming from Srpska Lista official, Igor Simic, and the head of the Kosovo Office, Petar Petkovic – but for now only those have been aimed at Stojanovic.

What is the connection between Radomir Laban and the election campaign?

It was Branimir Stojanovic who first brought the name of the judge of the Kosovo Constitutional Court into connection with the elections.

While submitting his candidacy yesterday, Stojanovic alleged that Radomir Laban stands behind staff-related decisions within SL, as well as that the people from Gracanica are not pleased with the SL mayoral candidate.

„A man who, according to his job description, should not be involved in politics, but who, in various ways, by abusing his position, through acquaintances with certain people, managed to impose himself and now he is the one who determines who will be the candidate for mayor for SL,“ Stojanovic told the media yesterday.

Radomir Laban has been a judge of the Constitutional Court of Kosovo for years and is unknown to the general public.

At the end of 2017, however, Serbia asked EULEX to arrest Laban.

In 2011, a Serbian court sentenced a member of the so-called customs mafia, a person named Radomir Laban, charged with taking bribes, to six years in prison, including the time he spent in detention – two years and four months. As several media outlets reported, it was suspected that Laban was in Kosovo at the time, on the run from the Serb authorities.