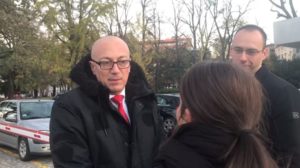 „Just do not change the subject from taxes, please! The lives of 100,000 Serbs are endangered!“- a deputy in the Kosovo Assembly, Igor Simic discouraged a KRIK journalist from asking the chief of Srpska Lista, Goran Rakic questions about his Vice-President, Milan Radoicic in front of the presidency in Belgrade yesterday. Milan Radoicic was indicted by the Kosovo Special Prosecutor’s Office, along with three other detainees – for involvement in the murder of Oliver Ivanovic. Special police units were unable to find him in the Grey building in North Mitrovica when they arrested the other three suspects last Friday.

„That’s a question for Mr. Radoicic. Maybe he had other obligations. He is currently in Belgrade. I don’t really know where Mr. Milan Radoicic will go and that’s a question for him. I really cannot speak on his behalf at this moment“ – Rakic told KRIK, following several attempts to avoid answering the question.

The former Kosovo Mayor of North Mitrovica, Goran Rakic handed in his resignation on Tuesday, declaring that the Kosovo municipal administrations in the North ceased to exist.

Milan Radoicic headed a group of approximately 30 Serbian representatives of Serbian and Kosovo institutions at the presidency yesterday. They met with the Serbian President, Aleksandar Vucic, after which they, along with the head of the Kosovo Office, Marko Djuric, addressed journalists. Radoicic, however, left immediately after the meeting.

This was the Srpska Lista Vice-President’s first public appearance since his attempted arrest and, as both Radoicic and Vucic claimed, his attempted assassination by Kosovo forces on Friday in North Mitrovica.

Srpska Lista also warned about the impending “humanitarian catastrophe” in Kosovo caused by an increase of import taxes to 100% on all products from Serbia.