Russia’s position is clear and you know that we support the territorial integrity of Serbia across all international platforms. Regardless of the EU’s demands for a quick resolution on the Kosovo problem, the long-term solution of this international problem should take into account the national interests of Serbia and the will of the majority of the Serbian people, rather than being based on the current relations between Serbia and the EU. Russia believes it is possible to solve the Kosovo problem with serious and set-agenda negotiations, based on the UN Security Council Resolution 1244. Other core documents on this issue cannot exist, reads the message of the Russian State Duma Vice-Speaker, Pyotr Tolstoy, conveyed in a press release by the five-member delegation of Serbs from North Kosovo and Belgrade who visited the Russian State Duma last week.

Tolstoy, accompanied by the Deputy of the General Council of the Party, „Unified Russia“, Sergey Zelezniak, met the Serbian delegation led by the parliamentary deputy and party leader of the Otadzbina Movement, Slavisa Ristic.

The delegation was composed of Marko Jaksic,the former MP and a leader of Serbs from the north of Kosovo, Slobodan Samardzic, former Minister for Kosovo and Metohija and President of the Statehood Movement, Dragana Trifkovic, President of the National Movement and Director of the „Center for Geostrategic Studies“, Svetlana Maksovic, General Secretary of the National Movement.

The visit followed a recent letter sent to Vladimir Putin by Slavisa Ristic, which stirred a great deal of attention in Russia, the delegation claimed. 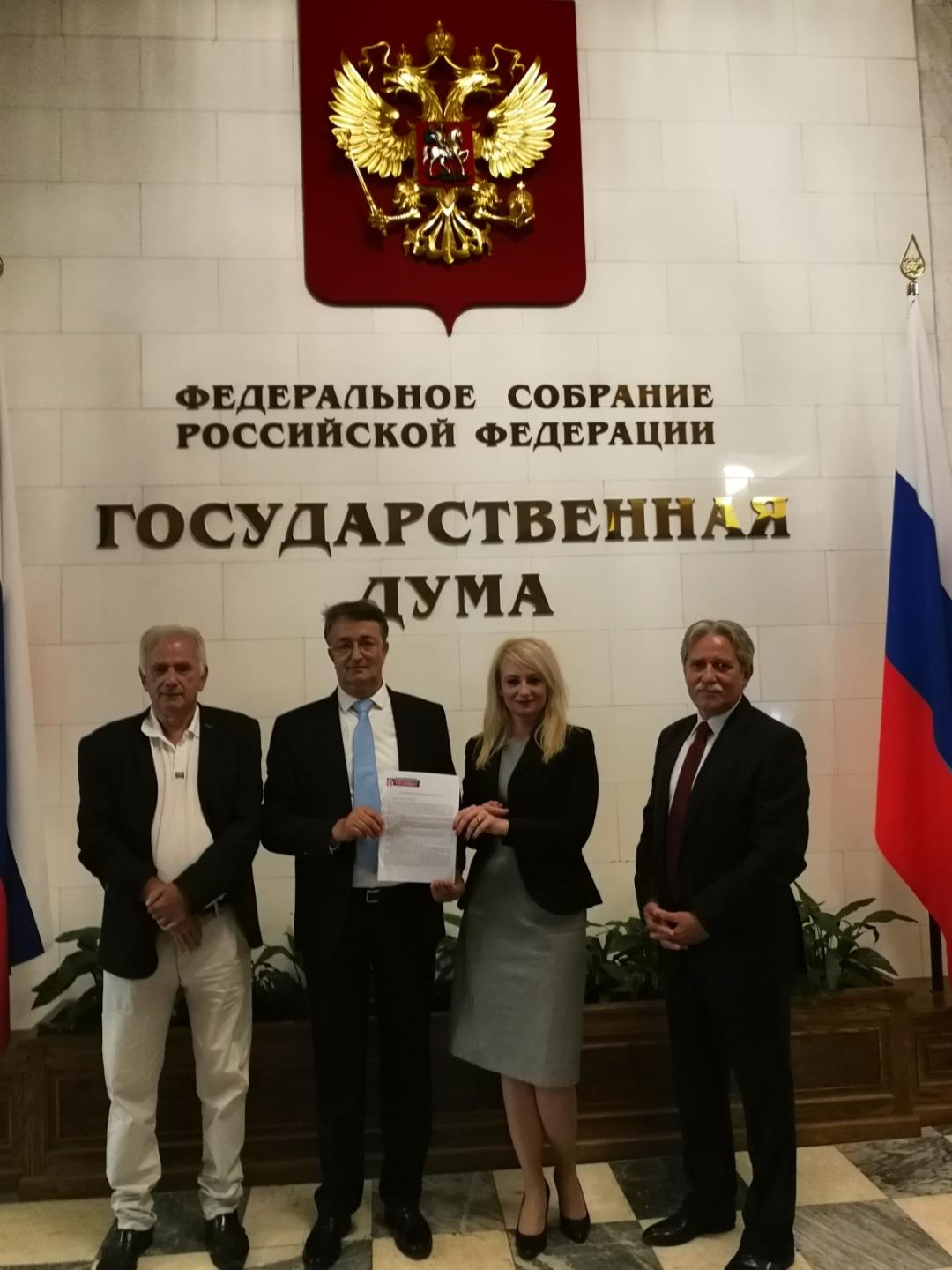 During this visit, Ristic handed over the original letter, containing, among other things, a request to Putin that regardless of whether Belgrade signs a comprehensive peace agreement, that the Russian President rejects the request once it is made to Russia to allow Kosovo a seat at the United Nations.

“We are now entering an even more dangerous situation when an agreement can be signed (a comprehensive, legally binding agreement with Pristina), which will deprive Kosovo Serbs of every perspective, and we are also afraid that this would lead to far-reaching consequences for Serbia or Serbian people in the whole region,” Ristic warned.

As stated by the Russian Duma, the main topic of the discussion was „an attempt to sign the so-called comprehensive agreement“ and „the attempt by the West to avoid compliance with Resolution 1244“.

„The EU and US request that Belgrade signs the so-called ‘Agreement on the normalization of relations’, the calls for territorial division of Kosovo and Metohija into a Serbian and Kosovo-Albanian parts, and the calls to carry out a so-called ‘exchange of territories’ and other attempts of this kind are categorically unacceptable“ – the Russian side stated their position on the agreement during the visit.

Zelezniak warned that the legally binding agreement could have catastrophic consequences.

They also warned of another consequence, by signing such an agreement Kosovo would potentially join NATO.

To date, there is a very complex situation in Kosovo in relation to organized crime, drug trafficking, terrorism, and this is a direct consequence of the “divide and conquer” policy of the West, splitting entire nations and states into parts and not caring about the consequences.

“The agreement was signed a year ago in Tirana by the Presidents of Kosovo, Albania and Albanian Macedonians on the expansion of the territory of Albania to the so-called natural Albania. They are openly talking about expansion, and Kosovo is not enough for Kosovo Albanians. If they move on to the administrative part of Serbia that is now under the supervision of Serbia, Serbia will have no defense. It is a good atmosphere to convince the Serbian people that Serbia must enter NATO. They will insist on the argument that NATO countries do not attack each other,” the Serbs said.

The announced visit of President Putin to Serbia is of great importance for Kosovo Serbs, with the possibility of a meeting with the President of the Russian Federation.

Serbs pledged to enhance cooperation between Russia and Serbia both via the parliament and parties. Slavisa Ristic proposed the Russian side to adopt a declaration on Kosovo.

„It would be of great importance if the State Duma of the Russian Federation adopted a declaration on Kosovo and Metohija to state its clear position and proposal for resolving the Kosovo problem. The Serbian people in Kosovo and Metohija are ready to suffer to fight and wait, but they need hope. They are afraid of quick-fix solutions and so-called compromises, as well as the creation of a Great Albania,“ Ristic said. 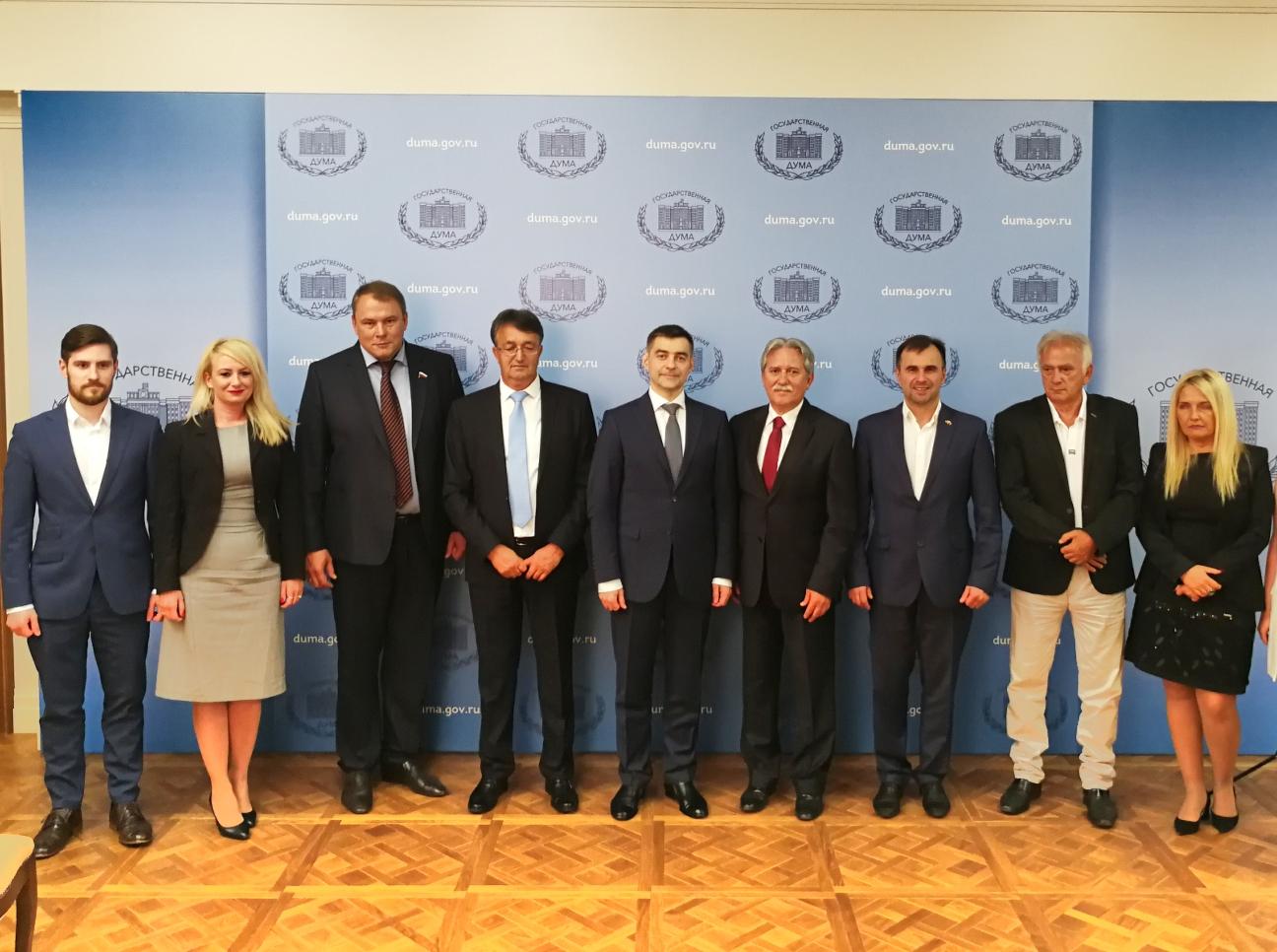