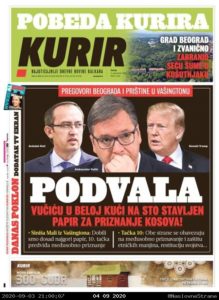 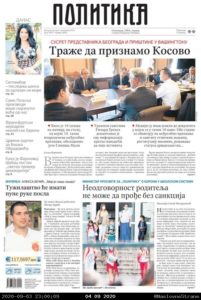 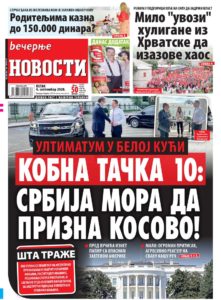 SHOCK in the White House… SWINDLE, FATAL POINT NO.10 – SERBIA MUST RECOGNIZE KOSOVO – read some of the headlines of Serbian daily media outlets on the two-day talks between Aleksandar Vucic and Avdullah Hoti held in Washington under the auspices of the administration of the US President Donald Trump.

Although the delegations were presented with a „non-paper“ at the meeting – as the president and leader of the Serbian delegation, Aleksandar Vucic revealed – the details of which were forbidden to discuss in public before harmonization, details of an alleged point no. 10 on one of the three papers presented at the meeting have been leaked to the media.

„Everything was prepared in advance. The Albanians knew everything“ – Belgrade-based daily Blic published exclusive information yesterday allegedly obtained from diplomatic circles in Washington about the „indecent offer presented before Serbia,“ with the headline: „TRUMP REQUESTED THAT WE SIGN RECOGNITION OF KOSOVO.“ This daily newspaper also alleged that the Serbian President “received” a paper according to which Serbia „should recognize an independent Kosovo today“.

“(We) got the worst paper ever, with a point about the mutual recognition of Serbia and Kosovo,“ Sinisa Mali said in front of the White House after the first round of talks between Aleksandar Vucic and Avdullah Hoti yesterday.

„The worst paper ever. There are 16 points in the document, ten of which mean the mutual recognition. This is precisely what President Vucic already knew,“ the Serbian Minister of Finance told the press, adding: „The President is fighting, we will see if he will endure.“

Meanwhile, Belgrade-based daily newspaper Vecernje Novosti published the content of the reported point 10 of the document presented to the Serbian delegation: „Both sides commit to mutual recognition and protection of ethnic minorities, restitution of property, resolving the status of individuals at the state level and agree to open offices for protection and reporting on minority rights every year.”

The US Special Envoy for the Belgrade-Pristina talks, Richard Grenell, who previously underlined that politics should be put aside, denied this news. The American National Security Council pointed out that the two leaders were making progress on the issues of economic normalization.

Simultaneously, in Belgrade, in the Pink TV studio, guests took turns to speak about the alleged ongoing drama in Washington. President Vucic’s skills and tenacity, despite the difficult position he is in, were repeatedly underlined.

It is true that the paper with proposals, including point 10 on „mutual recognition“, was on the negotiating table. President Vucic refused that in a very brutal way, the Minister of Foreign Affairs of Serbia, Ivica Dacic said during his guest appearance on Pink TV.

Vucic himself finally solved the dilemma. „Mali told you the truth,“ in what he told reporters in front of the White House. When asked about Richard Grenell’s denial that there was a request to sign the document on recognition, Vucic replied that he did not say „of what specifically he was talking about.“

„Don’t go against your country and stop being such pathological liars!“ – the Serbian President sent a message to those who „do not support their delegation“ and who falsely accused it of fabricating the news about the request for Serbia to recognize Kosovo.

On the other hand, Vucic had much nicer things to say about Trump’s cabinet: „I said that we cannot accept that. I have to be honest and say that the people from Trump’s cabinet were fair and they listened to what we had to say. I think that this provision will no longer be there in any future documents.“

The covers of Serbian daily newspapers from this morning read:

„Serbia had a shock in the White House. VUCIC RECEIVED A PAPER. Serbia should immediately recognize the independence of Kosovo“ – said today’s edition of Srpski Telegraf tabloid.

The front page of the Politika daily alerted: „They want us to recognize Kosovo“; Kurir tabloid: “SWINDLE. Vucic presented with a paper on the recognition of Kosovo in the White House.“ The same tabloid also published a quote from Sinisa Mali, as well as part of the alleged point no. 10.

„America wants us to recognize a false state! Immediately at the beginning of the talks, an agreement was placed on the table asking for ‘mutual recognition,’” the Belgrade-based tabloid Informer writes, estimating that „VUCIC FACED A FAIT ACCOMPLI IN THE US.“ This tabloid also published the president’s quote that read: „Surrender is not an option, we do not agree to blackmail.“

Unlike the majority of Serbian dailies and tabloids, the front page of Danas daily did not place focus on the negotiations in Washington. This daily only published the statement of Finance Minister Mali regarding the 16-point agreement. „The beginning of the talks between Serbs and Albanians in Washington. Mali: Never a worse offer on the table,“ this daily newspaper wrote.

„Huge pressure placed on the Serb delegation in talks with Pristina in Washington. Vucic receives paper on the recognition of Kosovo,“ reported ALO! tabloid.

„ULTIMATUM IN THE WHITE HOUSE. FATAL POINT: SERBIA MUST RECOGNIZE KOSOVO. A paper with a dangerous request from America presented to Vucic,“ warned Vecernje Novosti, while also publishing the content of the alleged point 10 and a quote from Sinisa Mali that Serbia is under enormous pressure and that they are „reacting aggressively to our every word.“

Despite the alleged drama the Serbian media have been extensively reporting about since yesterday, at the end of the first day of the talks, President Vucic said that he was not some kind of a hero. He also stressed that he was only doing his job in Washington, which includes saying no even in the most difficult situations.

The possibility that an economic agreement could be signed in the Oval Office of the White House today is being discreetly announced. The just-announced possibility that Donald Trump could briefly attend the meeting between the two leaders is interpreted as a sure sign that an agreement will be signed. Trump is in the midst of a pre-election campaign.

An agreement between the Belgrade and Pristina delegations, if it is signed today, will not be signed by the leaders of the delegations, but will have to be ratified in the assemblies.

The ratification of the agreement in the assembly will present a challenge only for the Kosovo side, where the ruling coalition could lose the formal majority in the assembly by revoking the mandate of Kosovo MP Etem Arifi, who voted to form the government and against whom an arrest warrant (to serve a prison sentence) was subsequently issued. In that case, Hoti will need the support of the Kosovo opposition parties, which refused to be part of the delegation in Washington. In the Serb parliament, the ruling SNS faces no obstacles – two-thirds of the parliament’s deputies come from the ranks of the ruling party, while other deputies are not known as the opposition in the public.