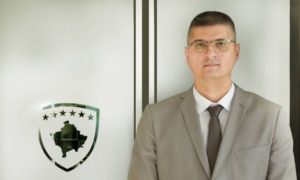 The former minister in the Kosovo government and current member of the Kosovo Central Election Commission, Nenad Rikalo has been appointed as the acting assistant to the head of the Kosovo Office as per a decision of the Government of the Republic of Serbia.

The Serb government reached the decision on Rikalo’s appointment at its 4th session held on November 12th. Rikalo will perform this function in the sector for support of the economy, agriculture, and rural development, thus replacing Zoran Bojovic, who was relieved of duty in the same session.

Rikalo has been performing the duty of state secretary in the Ministry of Agriculture of Serbia since March last year.

The then-Kosovo Prime Minister, Ramush Haradinaj dismissed Rikalo in early February last year. In late December 2018, the Indeksonline portal reported that the Kosovo Special Prosecutor’s Office filed an indictment against Rikalo for the criminal offense of „abuse of office or authority.“

Kosovo media also published numerous articles about suspicions of illegal actions of this Srpska Lista official. At the trial held in March, Rikalo pleaded not guilty, Pristina-based Koha reported at the time.

Despite the indictment filed against him, at Srpska Lista’s proposal, Rikalo was re-elected as a member of the Kosovo Central Election Commission at the beginning of the year.

With the arrival of the Serbian Progressive Party (SNS) in power in Serbia, Nenad Rikalo was appointed a member of the CEC in Pristina, after which he became a minister in Pristina.

On the same day, the Government made another personnel change in the Kosovo Office by replacing Sladjana Markovic Stojanovic, who held the post of the assistant director for the sector for return, social issues, and human rights, with Svetlana Miladinov.

Rikalo’s case – a former top Kosovo politician receiving a government post in Belgrade – is not a novelty however.

The former Deputy Prime Minister of Kosovo, Branimir Stojanovic, also found himself on the payroll of the Serbian government, where he was appointed as State Secretary in the Ministry of Economy of Serbia in January 2018.

He was one of the most exposed members of Srpska Lista until the 2017 Kosovo parliamentary elections, after which his presence in the public greatly decreased. Speculation ran rampant that he was marginalized from Srpska Lista by the decision of official Belgrade.

The first member of Srpska Lista who was appointed State Secretary in the Serbian government was the former Kosovo Minister for Communities and return, Aleksandar Jablanovic, who is currently the leader of the Kosovo Serb Party.

He spent a short time in the ministerial position. Jablanovic was forced to resign following a strong campaign launched against him by the Kosovo public after he called Albanians who protested against the arrival of displaced Serbs in Djakovica/Gjakova „savages“.

Jablanovic was also the State Secretary in the Ministry of Labor, Employment, Veteran and Social Policy of the Republic of Serbia, led by his, at the time, party leader Aleksandar Vulin.

He held this post for only three months, from the end of October 2016 to January 2017, when he resigned after a drug-smuggling affair in which his brother was allegedly involved.

The case of Ljubomir Maric also belongs amongst this line of politicians from Kosovo in the Serbian government. Maric is the former Kosovo Minister of Administration and Local Government and the former Assistant to the head of the Serbian Government Kosovo Office. After his post in Belgrade, Maric once again became engaged in Kosovo as a member of the Management Board of the Development Fund for the North, which was formed under the Brussels Agreement. He, however, returned to Belgrade in June, when he obtained a seat in the parliamentary elections on the electoral list „Aleksandar Vucic – for our children.“

In the early 2000s, two other Kosovo politicians who worked in the former provisional institutions of self-government in Kosovo, held posts in Belgrade as well. The assassinated Oliver Ivanovic served as State Secretary, while Kosovo Minister Goran Bogdanovic became a minister in Belgrade. Both of them led the former Ministry of Kosovo and Metohija in the Serbian government, which was abolished by the arrival of the new government in 2012, after which the Kosovo Office was established.