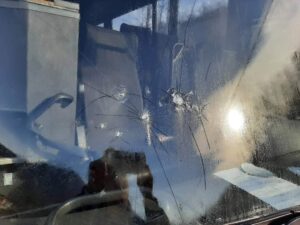 Seven buses belonging to Goran Antic from North Mitrovica, the owner of the Joe Travel company, were damaged this Thursday by unknown perpetrators. Antic told KoSSev that he appealed to the police to „do their job.“ He expressed suspicion that the attack happened due to his publicly shared views on the events related to Kosovo Serbs and politics or that it was a case of „racketeering“. The Kosovo Police said that the investigation is ongoing and that they have no new information for now.

Goran Antic told KoSSev that the incident took place between 9 and 11 pm on Thursday evening and that the damaged buses were parked in two parking lots – in Zvecan and North Mitrovica.

He revealed that he is not sure as to which object was used to damage the bus windshields, noting that he does not rule out the possibility that firearms were used on some of them. Antic assumes some kind of a sharp object was used.

The windshield on several buses were completely destroyed, while some windshields were cracked in several places.

Antic added that one camera in the North Mitrovica parking lot was damaged and that both parking lots were under video surveillance.

„By no means do I want to prejudge and it doesn’t have to mean anything, but in that period, a Golf vehicle, whether Golf 5 or 7 – I don’t know, passed through Mitrovica and Zvecan at high speed, a black or gray vehicle without license plates. At the same time, a similar vehicle stopped, facing the direction of my buses in the parking lot in Zvecan. Of course, this doesn’t have to mean anything, and that’s why I call on the police to finally start doing their job and discover the vandals, because what’s next? Should I be afraid for my life?! You know what happens to people in Mitrovica,“ Antic said, citing unofficial information from the police and other sources.

According to Antic, not only are the police obliged to find the perpetrators, but they should face no difficulties in doing so.

„Not only is it their job and they are obliged to discover the perpetrators, but they should not have any problem doing it in a professional sense. This is a small town, and the crews that do these things are usually one and the same.“

If not, in order to „motivate the police to do their job,“ Antic revealed that he is also thinking of undertaking civil disobedience.

He stressed that he is thinking of parking the buses on the city streets: „Let them write parking tickets, maybe it will force them to do their job.“

„What else do I have left? Should I wait for them to continue to destroy my property, endanger my family or shoot me,“ Antic told KoSSev.

The Joe Travel owner said that this is not the first time that his property has been damaged, but it is certainly the biggest such case so far.

„This happened to me two more times in the past – once after I crossed Jarinje, at a time when alternative routes were being used.“

When asked whether he knows or presumes the reason behind the attack on his private property, Antic said that he has no problems with anyone.

Although he is not politically active, nor does he participate in public life, Antic still cited politics as one of the possible reasons behind the property damage. He also alleged that „possible racketeering“ could be one of the reasons.

He expressed suspicion that the attacks against him have to do with his freely expressed views on events important to Serbs and politics and criticism of the government which he shares on his personal Facebook page.

„I am a free man. I am an engineer, I have my private business. I live exclusively from my work, I do not participate in political life, but I am an active member of this community and like any free man, I have the right to my own views and freedom of speech,“ added Antic.

The Kosovo police confirmed in two separate police reports that a total of seven buses in Zvecan and North Mitrovica were damaged and that the investigation is underway. No information about the perpetrators or motives has been announced.

The Deputy Commander of the Kosovo Police for the region north, Besim Hoti also confirmed for KoSSev this morning that the motives and perpetrators of this crime still remain unknown.

„After the preliminary police actions in the field, it is now up to the investigators to work on obtaining all the information about possible motives, the criminal act, but at this moment there is no new information,“ Hoti confirmed.

The police still do not know which object was used to damage the windshields.
Hoti said that evidence is being collected, and that surveillance camera footage will be of assistance in resolving this case.

He added that the prosecutor opened the case and classified it as damage to movable property.

Vucic: Albanians are not ready to compromise

Lajcak from Belgrade: The status quo is not sustainable for either... 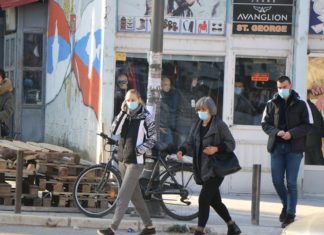