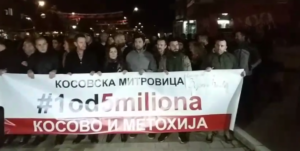 The son of the murdered GI SDP leader spoke to the Danas newspaper about the „One out of five million“ rally in the North Mitrovica. Protests are not supported by just a part of our family, we are all together in it, the son of Oliver Ivanovic, Nikola Ivanovic told Danas regarding his participation in the first „One out of five million“ protest walk held last Saturday in North Mitrovica.

„Our family is interested in discovering who the murderers and instigators of the murder of my father Oliver Ivanovic are. I see that there are more problems in the country that need to be solved, and that is my personal reason for participating in the protests in Belgrade from the beginning. I do not know whether I will always be able to go to protest in Mitrovica, but I will continue to participate in them,“ said the son of the murdered president of the Civic Initiative „Serbia, Democracy, Justice“.

He confirmed that the candles, which the protest participants lit on Saturday night in front of the SDP headquarters, at the place where his father was killed, disappeared after a while – they were removed from the soil, but he also added that „he cannot think about the actions of people whose behavior he does not understand“.

All candles that were lit after the protest walk on the site where Oliver Ivanovic was killed on January 16th, 2018, disappeared two hours later, even though they had not burned out completely.

„We are in shock, we cannot believe that someone hates the deceased Oliver Ivanovic so much, and that something like that happened in front of the SDP headquarters, and we were told that we were kept safe by the police 24 hours a day. The police either did not respond, nor were they in their place,“ deputy president of SDP, Ksenija Bozovic told Danas.

We need the truth

The wife of Oliver Ivanovic, Marina Ivanovic, who attended the first Mitrovica protest with her son, briefly told our newspaper that „the family wants the truth and for the culprits of Ivanovic’s murder to be found.“

Slavisa Ristic: We respected the invitation of the organizers

„The organizers, calling for a protest in Mitrovica, said that there was no political organization or party behind it, which Otadzbina understood as a message. We did not want the gathering to have political connotations, so Otadzbina was not there, neither was Ksenija Bozovic, deputy vice-president of the Civic Initiative SDP. Otadzbina supports the protests against Aleksandar Vucic and his regime all over Serbia, including in Mitrovica,“ a deputy and president of the Otadzbina movement, Slavisa Ristic explaining why this movement did not participate in the first “One out of five million“ protest in Kosovo. „Otadzbina“ is a member of the Alliance for Serbia.

A message from Gracanica

„I am Branislav Markovic and I live in Gracanica. I would like to take this opportunity to give my full support to the Serbs from Kosovska Mitrovica who went out tonight to fight for their rights and freedom. To give them the support to always and at any time, without fear and hesitation, say everything that is in their hearts and to ask people from the Government of Serbia to never again forbid, to a single Serb, in any city, to walk the streets of the city in which they were born“ – this was the message Branislav Markovic sent in front of the Gracanica monastery on the day of the protest.

Danas newspaper also published an interview with one of the organizers, Dejan Nedeljkovic, conducted by Al Jazeera. Read about it in: „1 out of 5 million“ organizer in North Mitrovica: Threats with dismissal over Facebook likes