Most people in Mitrovica work in the public sector and are scared that they will lose their jobs because of their political views, Dejan Nedeljkovic said.

The residents of the northern part of Kosovska Mitrovica, a municipality where for years no citizen gathering has occurred without the approval or organization of the authorities in Belgrade, joined a series of protest gatherings under the slogan „One out of five million“ this weekend. Nevertheless, this Saturday’s gathering was preceded by one under the organization of the authorities – held the day before. One of the organizers of this other gathering was threatened with hanging on Terazije in Belgrade via social networks. They were accused of dividing the Serb people and of organizing an „anti-Serb protest.“ Accusations and threats are taken much more seriously in Kosovo, after similar ones were received, before the murder, by the leader of the party Serbia, Democracy, Justice, Oliver Ivanovic. Nevertheless, one of them, the head of the NGO „Green Heart of Kosovo“, Dejan Nedeljkovic, who has became famous in the Twitter community for his different attitudes than those which are heard from Kosovo, told Al Jazeera that it was worth it.

„It was difficult before the protest and our expectations were not great, but when we saw the number of people who walked with their heads held high and the great interest of the journalists, I think that is priceless. We showed support for the protest demand in Belgrade, to discover the perpetrators and the instigators of the murder of Oliver Ivanovic, we do not want for that to be forgotten because until this happens, Mitrovica will never be a free city.“

You said you were satisfied with the turnout. It is estimated that there were about 100 people, much less than the number of those who at the send-off for Oliver Ivanovic, who was also honored after the protest walk? How did this difference in numbers come to be?

The day Oliver Ivanovic was killed, it was a shock for the entire Mitrovica, Kosovo, and even Serbia. People only felt free that day, when Oliver was sent off to the Alley of Meritorious Citizens at the New Cemetery in Belgrade, and that’s why there were so many of them. Among those people there were also people who were residents of Kosovska Mitrovica, but who work in the state services, both those of Serbia and those of Kosovo. These people were not there yesterday because they were threatened that if they appeared at the protest they would lose their jobs.

What happened on the eve of the protest, were there any pressures for the protest to not be held?

There were no direct pressures towards me and Marko Jaksic, we have been considered as opposition in Kosovo and Metohija for years. But there were pressures on other people. What can I tell you when the problem was a plain „like“ on Facebook on the invitation for the protest, when people working in the state services received threats of dismissal because of it, that they were asked to withdraw their „like“. The very arrival of the head of the Serbian government office for KiM, Marko Djuric, which we thought was harmless, and then we realized that it was connected with our announced protest. All this speaks of the atmosphere not being right. Therefore, we announced via social networks that if something happens to us or to any of the participants of the protest, the only responsibility will be borne by Marko Djuric or the president of Serbia, Aleksandar Vucic.

Protest demands in cities across Serbia differ. What are the demands of this (protest) in Mitrovica, with what are the citizens in Mitrovica not satisfied?

We did not want to go with specific requirements pertaining to Mitrovica immediately at the first protest, although there are many problems. Starting from the fact that there are still no regional landfills, to water problems. Although, as far as I know, the money for the water supply was deposited in the account of the contractor six months ago, nothing is happening. And water shortages are one of the biggest problems in Kosovska Mitrovica. The lack of parking space is also a problem. But no one is dealing with these problems seriously.

You announced the protest as civil. The same was said for the protest on Friday by speakers who addressed the citizens. What is the difference between these two protests?

I do not know, they accuse us of dividing the people. In essence, the only one who are dividing the people, that is, the Serbs, into suitable and unsuitable, is Srpska Lista. None of us are forsaking the state of Serbia, that is our country of origin, we do not have any other and we love it more than any other. Our interests do not differ from theirs. We are also against the taxes, against the annexation of North Mitrovica, against everything they are also fighting against. Only they are doing it on purpose. For example, they only now recalled to protest against the plan to join North and South Mitrovica. Marko Djuric has not been in Mitrovica since September, and he came on the eve of our protest.

It is funny that they are talking about divisions among the Serbs, while Srpska Lista continues to be part of the Government of Kosovo. Although they claim that they are no longer in the government, they are receiving salaries there, they are receiving daily allowances, everything that Aleksandar Martinovic (the head of the Serbian Progressive Party in the Serbian Assembly) spoke about the opposition in Serbia is being done by the representatives of Srpska Lista in the Assembly and the Government of Kosovo.

Someone recently wrote that Serbs from Kosovo are always spoken of as some sort of collective entity, whose members all share the same opinion. Does such a thesis exist and is it, therefore, a bigger problem when a different opinion appears in Mitrovica, than it does, say, in Belgrade, Uzice or Krusevac?

Of course. That is why they were aiming to have such a high percentage of support in the elections in Kosovo municipalities. But when you take a closer look, you see that they have won about 80 percent of support of those who voted, but it is forgotten that only a third of registered voters voted. So two-thirds did not support that policy. But people are still scared. There is almost no private sector in Kosovo. Most of them work in the public sector and are afraid that they will lose their jobs if they publically express their political views.

Will you continue with the protests in North Mitrovica?

We will decide in the upcoming days. All that happened before the protest, what is happening afterward, the address of Marko Djuric and his comments on the protest, gives us the right to be scared, not for ours, but for the safety of other participants in the protest. On the other hand, the people from Gracanica, Strpce, who were interested in spreading the protest to other towns in Kosovo, also contacted us, so we will estimate what is the best thing to do.

Thaci or Hoti, that is the question… 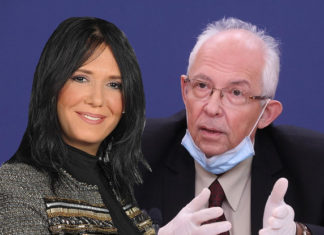