Members of the Association of Journalists of Serbia and the Association of Journalists of Kosovo, accompanied by the head of the OSCE Mission in Kosovo, Jan Bratu, placed a memorial plaque today – for the eight time – to their missing colleagues, Radio Pristina journalists, Djura Slavuj and Ranko Perenic, at the place where they were last seen in August 1998 in Zociste, near Velika Hoca.

The President of the Association of Journalists of Kosovo, Budimir Nicic expressed hope that this is the last time this plaque is laid and that „this will no longer be a symbol and example of the failure of the institutions that were supposed to discover the perpetrators which have been demolishing it.“

„The police managed to find out who had demolished the memorial plaque the last – the seventh – time,“ said Nicic, stressing that this will no longer be tolerated.

He added that he expects from the prosecution and the court “to give the maximum sentence” to the perpetrators.

Secretary-General of the Association of Journalists of Serbia, Nino Brajovic sent a message to „those who have demolished this plaque seven times,“ that they will not discourage them in their “efforts to find out the truth, to find our colleagues, and to ensure justice.“

Snezana Perenic, the wife of the missing journalist Ranko Perenic,

was also present when the memorial plaque was placed today, said that „there is no good will to solve this.“

Brajovic added that „journalists have seen for themselves repeatedly that perseverance pays off.“

„I can prove this by our twenty-year-long struggle to discover the killers of our colleague, journalist and owner of Dnevni Telegraf and ‘Evropljanin,’ Slavko Curuvija. The first-instance trial of his murderers was just completed,“ he said.

The head of the OSCE Mission in Kosovo, Jan Bratu underlined that coming here again is a traumatic experience because the plaque was first laid in August 2012 in the place where the journalists went missing. He also expressed hope that this eighth plaque will be the last.

According to the Head of the OSCE, working in the media is important in post-conflict areas, but dangerous as well.

Bratu stated that impunity is unacceptable, adding that crimes, killings, kidnappings and attacks on journalists should be prosecuted and that they will not and must not be forgotten.

He added that there were actually 15 cases of murder and abduction of journalists and that only one was solved so far.

Bratu commended the work of the Kosovo Police the last time the plaque was demolished.

After the memorial plaque was laid, the journalists held an inscription „Return our colleagues to us,“ written in Serbian and Albanian language.

The memorial plaque reads in both Serbian and Albanian: „This is where our colleagues, journalists Djuro Slavuj and Ranko Perenic were kidnapped on August 21st, 1998. We are looking for them.“

Journalists Djuro Slavuj and Ranko Perenic went to the Sveti Vraci Monastery in Zociste to do a story on the return of the abducted monks on August 21st, 1998. According to the information given by their families, they were last seen in the afternoon in Velika Hoca. They mistakenly headed towards Orahovac, which was under the control of the KLA at that time.

As the Association of Journalists of Serbia (UNS) revealed, the editor of Radio Pristina at the time and the head of the Media Center in Pristina, Milivoje Miki Mihajlovic saw a Yugoslav Army report on the eavesdropping of the KLA on the day of the disappearance of Perenic and Slavuj, which stated: „Two packages were brought to Bela Crkva“ (a settlement in Orahovac). Mihajlovic told UNS that he immediately sent New York Times journalist Mike O’Connor to this settlement.

„When he returned he asked me for the serial number of their recorder. I knew the number because I personally bought it. He saw the ‘Sony’ which Ranko and Djuro took with them. O’Connor also saw a blue Zastava 128 and the recorder was in it. He asked the KLA commanders where the people from the car are, and they replied that they do not know anything and that they found it like that,“ Mihajlovic told UNS. 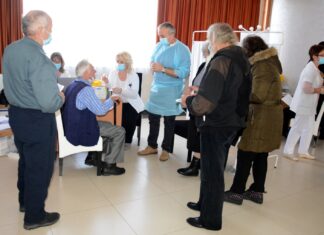