The news that an urgent order has been issued and that ROSU special units will invade the north to arrest two Serbs for the murder of Oliver Ivanovic, which several Serbian portals, including the Kurir tabloid, published „is untrue, tendentious, aimed at spreading misinformation and political messages among citizens, all with the aim of destabilizing and spreading fear in that part of Kosovo,“ the Kosovo police wrote in a statement.

„A special ROSU unit has received an order from Pristina to arrest two young Serb men from North Mitrovica as soon as possible, who allegedly possess a recording of the murder of Oliver Ivanovic. Their names were provided by Rada Trajkovic at a special prosecution hearing in Pristina just three days before the elections in Kosovo and Metohija.“

„The raid of ROSU in the north of Kosovo on the eve or on the election day could lead to new unrests, which Trajkovic wants, as she believes it would decrease the turnout of Serb voters in North Mitrovica, Zvecan, Leposavic and Zubin Potok – all of who would be voting for Srpska Lista. The lower turnout in the north suits Trajkovic because she is trying in every possible way to prevent Srpska Lista’s victory and to break Serbian unity,“ Belgrade-based Informer published, citing unnamed sources from the Kosovo police, which was then picked up by the Kurir tabloid.

Reviewing all the headlines in 2018, journalists of the Raskrikavanje site revealed that out of 358 issues raised by the Alo tabloid last year, 149 of them contained fake news without reliable sources and evidence.

In addition, another Belgrade-based tabloid Informer published 351 false or unfounded news pieces on its 306 front pages in 2018. The covers of 223 issues of Srpski Telegraf had as many as 230 false or unsubstantiated claims – Raskrikavanje revealed.

On the other hand, the Kosovo police „strongly reacted to this false article and encouraged all citizens not to fall prey to such misinformation but to rely on official information and at the same time cooperate with the police.“

In addition, we urge the journalists from these media outlets to contact the relevant authorities, in this case, the police, for clarification and to obtain accurate information in order to properly inform the public – the Kosovo Police also wrote.

On Wednesday, while referring to „well-informed“ unnamed sources, the Alo tabloid announced a massacre in northern Kosovo organized by the alleged „terrorist organization B13“. 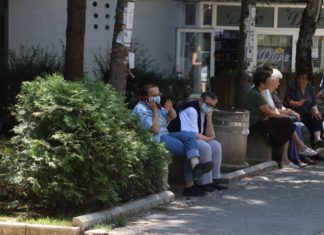