The seventh extraordinary parliamentary elections in Kosovo were held yesterday. Although long periods of political stalemate over the forming of a government are practically a tradition in Kosovo, it seems that this time the government will be established on time. Although votes from the Kosovo diaspora, as well as conditional votes, have not yet been counted, it appears that the Self-determination (Vetevendosje) leader, Albin Kurti will be the next Kosovo Prime Minister.

Although these are preliminary results, the most likely winner of these elections will be the Self-determination movement with 25.76%, or 197,134, of the votes cast.

Another opposition party, although a minor pre-election poll favorite, the LDK party took the second place with 25.06% of the votes. However, the difference between the first-ranked Self-Determination and the LDK is only a few thousand votes, which is why the outcome of the election remains somewhat uncertain.

On the other hand, there is no doubt who the winner is among the Kosovo Serb parties. The absolute winner of the elections in Serb communities is the Srpska Lista party. According to its chief, Goran Rakic, this party won over 98% of the votes in Serb-majority municipalities. After 95.64% of the polling stations were processed, Srpska Lista won 47,633 (6.22%) votes. Even without the votes of displaced persons and conditional votes, in this sample, the party already won more votes than it did in the previous elections in 2017. At that time, Srpska Lista obtained 44,499 votes.

Check out the table below for detailed information on the number of votes of each of the 25 political entities running for the Kosovo Assembly. Election turnout was just over 44%. Throughout the day, Serb-majority municipalities had the highest turnout. The highest turnout in the entire Kosovo was recorded in the North, in the Zubin Potok municipality, where 57% of voters came out to the polls. Another Serb-majority municipality took the second spot – Strpce (55%), the same turnout as in Pristina (55%). See the table below for all turnout results and the exact number of voters. 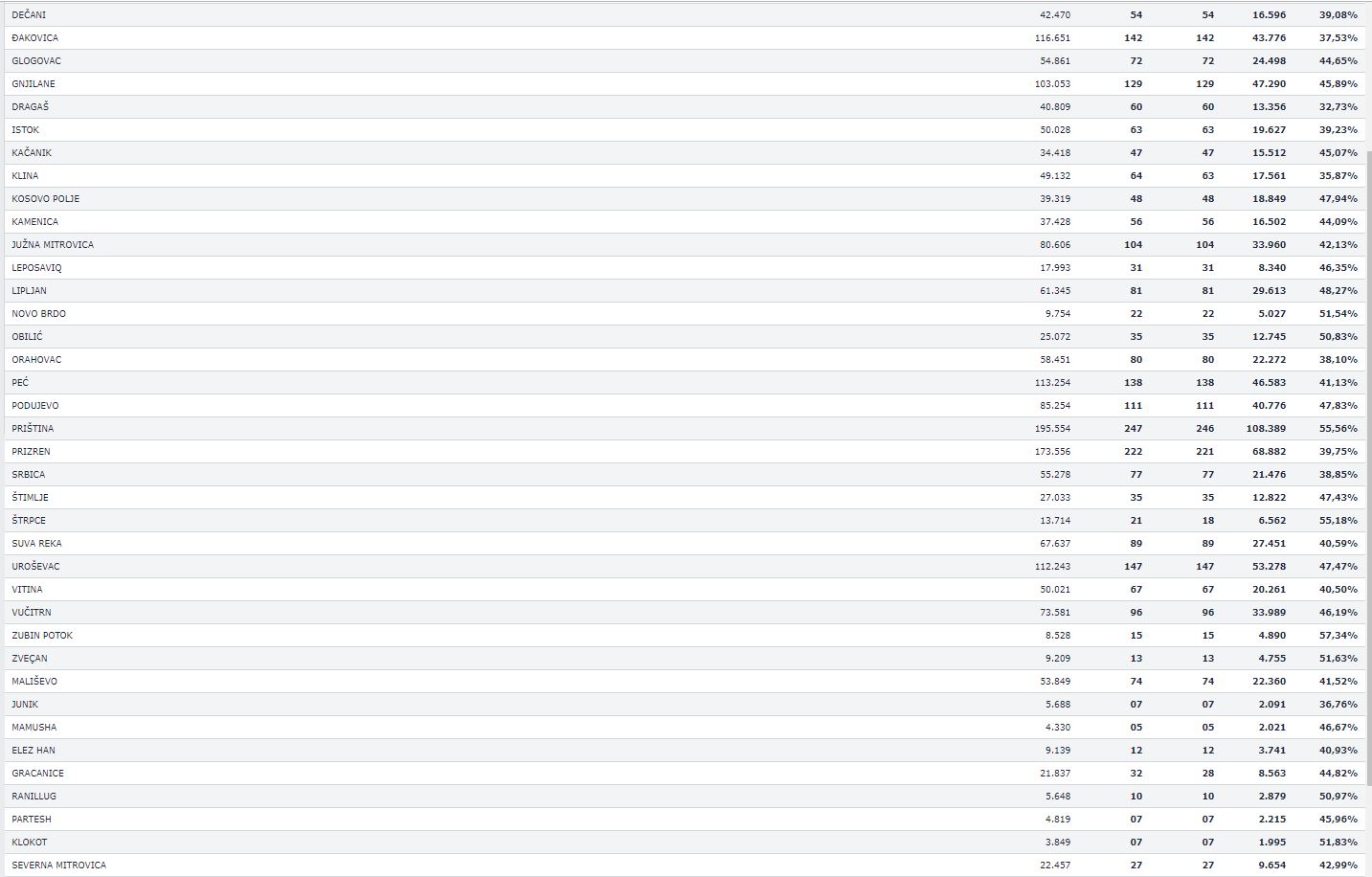 Twenty-five political entities competed for the votes of 1,934,868 registered voters (total population since 2011 – 1,739,825), including 20 parties, 4 coalitions and one independent candidate. In total, 1,067 candidates vied for one of the 120 seats in the Kosovo Assembly.

Speaking of the Kosovo Serb political entities, three parties and one coalition competed for the votes of 117,808 voters registered in Serb communities.

How were the elections called?

The Kosovo assembly was dissolved at the end of August after a Prime Minister-designate could not be found to form a new majority following the resignation of Kosovo Prime Minister, Ramush Haradinaj. Haradinaj resigned because, as he explained at the time, he received an invitation from the Special War Crimes Tribunal to testify in the capacity of a suspect. As his brother, Daut Haradinaj later explained, a court summons was delivered to Ramush for his refusal to abolish 100% taxes on import of goods from Serbia and Bosnia and Herzegovina. The taxes are the biggest legacy of Ramush Haradinaj’s government and a move that completely blocked the dialogue on the normalization of relations between Belgrade and Pristina.

However, despite a nearly year-long suspension of negotiations, in the last few weeks, the US first appointed a Special Envoy for the Western Balkans, Matthew Palmer and then a Special Envoy for the Belgrade-Pristina dialogue, Richard Grenell. Grenell’s appointment arrived amidst speculation about a possible continuation of dialogue by the end of this year and reaching a final agreement between Belgrade and Pristina, which, according to the State Department, is also Palmer’s and Grenell’s task.