Kosovo marked its „Liberation Day“ today – the entry of NATO troops on June 12th, 1999, following the 78-day-long bombing campaign of the then Federal Republic of Yugoslavia.

The main manifestation was held in the village of Poklek near Glogovac. In a house in Poklek, according to the HLC data, 53 people (24 women and 23 children) were killed and their bodies were burned on April 17th, 1999. According to the same sources, members of the Serbian Special Police Units were allegedly responsible for the killings.

Kosovan Prime Minister, Albin Kurti, who attended the manifestation in Poklek, stated that June 12th marks “the end of genocide in Kosovo,” reiterating that Kosovo should sue Serbia for genocide.

“June 12th marks the end of the genocide in Kosovo. Kosovo is free and independent. We will work on Kosovo becoming more developed and sovereign. This partnership is similar to the one with NATO we want to join. We gathered here in Poklek because it is proof of the genocide of Serbia in Kosovo. Twenty-five of those killed were young people, 18 of them were minors. Albanian civilians fled the house, but the police forced them to return. In the end, they burned their bodies, this was Milosevic’s Serbia,“ Kurti said.

The Kosovan Prime Minister also emphasized that Serbia has failed to apologize for the crimes it committed in Kosovo. He stated that Kosovo will sue Serbia for genocide and that it will never stop seeking justice. 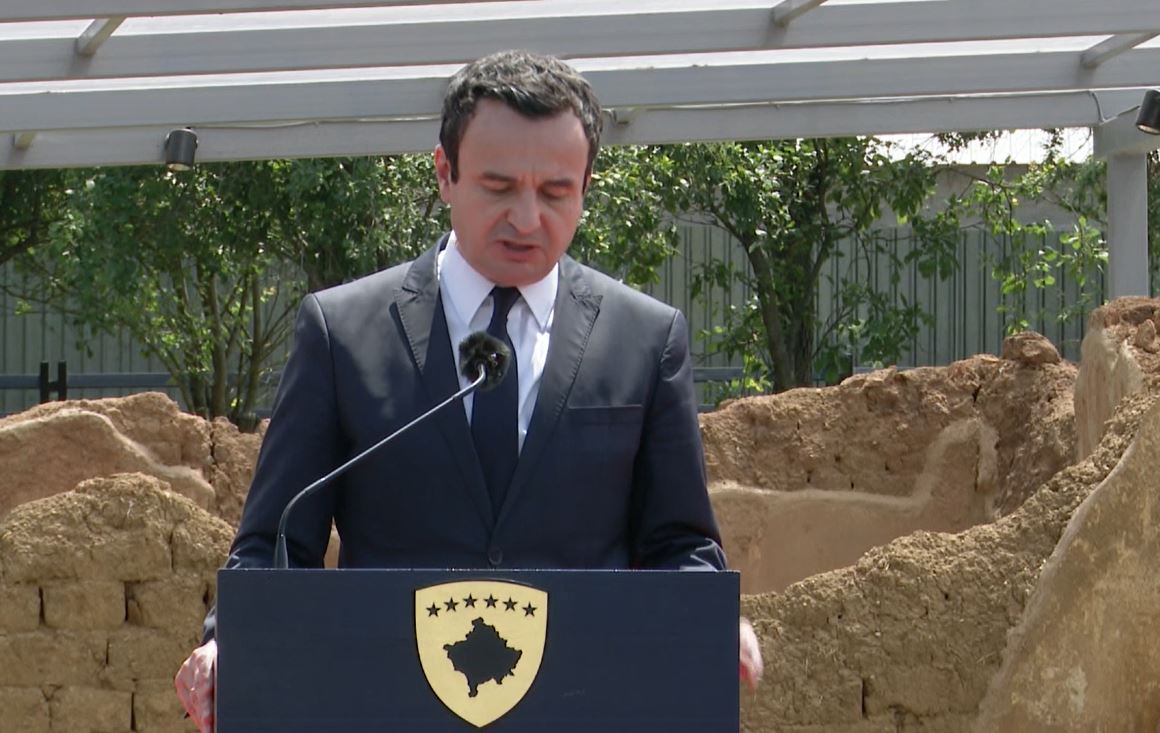 The Kosovo President, Vjosa Osmani, also visited Poklek with Kurti today. Osmani, who described this village as the „Kosovo Holocaust“ back in April, once again spoke about the crimes of Serbia.

Osmani quoted former NATO Secretary-General Javier Solana, who said that „whoever had doubts“ about the NATO bombing should come to Poklek. Osmani stated that the statement is “like looking at the palm of your hand” even 20 years later.

„That is why we returned here today, where we have always been advised by the Secretary-General of NATO, and above all, where our human conscience calls us every day. And we are returning not because some of us here doubt the justice of the NATO intervention that stopped the Serbian genocide, but to repeat this message today and every time and to understand how expensive the price of freedom was for the people of Kosovo,“ Osmani said.

„We have to say out loud that freedom is not complete. It is not complete due to a lack of justice. And freedom will only make sense on the day when there is justice for all victims of Serbian genocidal rule. When Serbia apologizes, when it lays flowers and when it admits guilt for all the massacres in Kosovo against innocent people,“ she added.

The President of the Assembly of Kosovo, Glauk Konjufca also spoke about the negative role of Serbia in Poklek today. Konjufca said that Milosevic’s political legacy is still „built into institutions“ in Serbia.

„The danger and intimidation from Serbia have not yet passed, the threat is more present today than ever before, since June 12th, 1999, because as long as Serbia still has plans to return to Kosovo, and it does not hide this at all, we are ready to defend our homeland at all costs. As long as Serbia has us in its constitution, nothing is over with Serbia,“ said the president of the Kosovo Assembly.

The event in Poklek was also attended by EU chief Tomas Szunyog and the British ambassador Nicholas Abbot.

KLA veterans also marked Liberation Day earlier today. Under the slogan „We are with you, liberators“, a protest were organized in Pristina today in support of what is perceived as the unfair detention of the leaders of the former KLA in The Hague. Serbia was marked as an occupier who did not pay for its crimes, while the Albanian liberators were unjustly detained. Similar messages on genocide were also sent in Pristina.

A museum of KLA war heroes was also opened in Prizren. The museum inscription in English, however, contains both spelling and grammar mistakes.

Petkovic: Kurti to start introducing his compatriots to the criminal nature of the terrorist KLA

The head of the Kosovo Office, Petar Petkovic, reacted to the latest statement of Kosovo Prime Minister Albin Kurti on genocide. Petkovic alleged that Kurti, „instead of working hard on the chauvinist concept of declaring Serbs and Serbia as criminals, should start introducing his compatriots to the criminal nature of the terrorist KLA, whose victims were not only Serbs but also many Albanians.“

„After all, Kurti was one of the ideologues of that evil machinery, which killed, kidnapped and butchered people in order to trade their organs, and he is the last person who should ever accuse anyone of genocide,“ Petkovic said in a statement.

He added that Serbia is consistently ready to investigate all crimes, „whether they are real or imaginary“, noting that they have expressed readiness to allow the investigation of every site that is suspected to contain human remains.

„But Pristina does not want to show the same kind of openness, because Kurti is aware that his ideological-propaganda story about the so-called genocide against Albanians crumbled in the face of reality and the truth about the true nature of the KLA,“ Petkovic said.

Twenty-two years ago on this day, the first NATO troops entered the then territory of the Federal Republic of Yugoslavia. The arrival of troops, whose mandate was given based on Resolution 1244, was preceded by the signing of a military-technical agreement in Kumanovo, three days earlier, which marked the end of the NATO bombing of the FRY.

The agreement took place after 11 weeks of bombing and five days of negotiations.

Serbs remember this day as the withdrawal of Serb forces, when about two-thirds of the Serb population, mostly from Metohija, also left Kosovo, and the ethnically motivated crimes against the remaining population intensified. The majority of them never returned to their homes.