“Political stakeholders from Serbia and Kosovo do not have the courage to implement the Brussels Agreement because they are rightfully scared of their own people. They have to look for a way to establish citizens’ equality and to offer solutions to facilitate their everyday life, rather than locking them up in national corrals. They have nothing to offer for a better future to their own people, but they are using the story of ethnic delimitation to obscure their political incompetence. Germany has had a clear position from the very beginning. It is against any ethnic delimitation because it would be disastrous for the entire region,” a deputy for the German Bundestag, Josip Juratovic said in an interview with KoSSev. Croatian-born Juratovic moved to Germany at 15. He is currently an SPD deputy in his fourth mandate.

Juratovic visited Pristina a week ago with his Bundestag colleague Gabi Weber to get acquainted with the situation in the field, primarily related to socio-political development and relations with countries in the region.

KoSSev talked with Juratovic immediately before the Kosovo media announced that Serbian and Kosovan presidents and prime ministers will meet with Angela Merkel and Emmanuel Macron on April 29th in Germany.

Juratovic visits the region several times a year “in various functions,” including „summer tours of the Balkans“ almost every year with his colleagues and associates, nurturing many friendships in all countries of the Western Balkans.

Taking into account your first impression, what kind of parallel could you make between the region which you left in the seventies to move to Germany – the former SFRY – and what you find when you visit the region half a century later?

What I am noticing in the entire region is that people have got freedom and they do not know what to do with it, so they are not using it in the right way. People can move freely today, they can freely express their positions, they can create social-political order. Nevertheless, at the same time, there is an indescribable amount of nepotism and corruption which was never seen before in the history of the region. People obviously replaced the communist ideology with the nationalist ideology, thus becoming even greater prisoners of uniformity of opinion.

Can you assess in which direction the region will develop, primarily the Western Balkans, in the next two decades? Some of the possible scenarios, or a scenario? Based on the existing indicators and trends, how much is required for genuine democratization of society in the Western Balkans?

If the region continues to develop in this way and with the same speed, then we should be happy if society remained at its current level because the situation does not show any positive trends. The society in which the young people gave up fighting for a better tomorrow and are leaving the country is condemned to the solidification of the existing system (nepotism and corruption), which will lead to a total failure.

Because the public does not deal with it. Free media is the key element of democratic order. If the media does not use these freedoms, then we have two reasons – either we have corrupt media, or we do not have democracy, that is, the freedom of socially responsible media.

How realistic is the possibility of what the public interprets as a partition of Kosovo at this moment? Where did this idea come from two years ago, even after, over the past years, the western mainstream politics that dominated the resolution of the Kosovo issue clearly refused any idea on the ethnic division of territory?

The idea of the partition of Kosovo is exclusively based on the political stakeholders from Serbia and Kosovo who signed the Brussels Agreement with their fingers crossed in their pockets and now do not have the courage to implement it because they are afraid of their own people. And rightfully so, as they have nothing to offer for a better future to their own people, but they are using the story of ethnic delimitation to obscure their political incompetence. Finding solutions to the issue of better living conditions of both Serbs and Albanians in Kosovo. These include employment, housing security, education, health security, age security, infrastructure and energy issues, and anything that would give young people hope for a better future in Kosovo. Doesn’t the fact that the political structures in Kosovo are not capable of organizing waste disposal speak enough, let alone any conditions for investment, without which there is no basis for a better future?

Do you understand what Belgrade suggests when it calls an idea of a solution to the Kosovo issue a „demarcation“ of the Serb and Albanian people, what Pristina calls „a minor border correction“ and the „joining of Presevo to Kosovo“, and what part of the international community calls „the exchange of territories“?

Whatever you call that project – it is contrary to the democratic principle. Because democracy is based on the equality of all citizens of a country and not on ethnic divisions. Kosovo and Serbia must seek a way to establish equality of citizens and offer solutions to facilitate their everyday life, rather than locking them up in national corrals. In addition, both sides exclude the rights and equality of other minorities.

Would it be right to say that Germany, at this time last year, was inactive when it comes to talks between the two Presidents, that is, the dialogue in Brussels? And that it is now actively monitoring what is happening? What does this proactive relationship mean?

Unlike other stakeholders in the region, Germany has had a clear position from the very beginning – it is against any ethnic delimitation because it would be disastrous for the entire region out of several reasons. Germany clearly advocates the implementation of what was agreed within the Brussels Agreement. Otherwise, the whole region will lose its credibility, which would be terrible for the rest of the southeast European countries’ pre-accession negotiations to join the EU.

Do you know what is happening with this dialogue deadlock? Are the speculations that a so-called parallel secret dialogue is being led between Belgrade and Pristina true?

I do not want to deal with speculations. I am interested in the facts, and the fact is that Belgrade and Pristina are doing everything so that the Brussels Agreement is not implemented. The best example is, on one hand, the blocking of Kosovo from joining INTERPOL and on the other hand, Kosovo’s introduction of 100% customs duties on goods from Serbia. With this, on both sides, only criminals profit and this raises the question: Do these policies work for the people paying them or for the criminals?

What is currently going on between Germany and USA when it comes to the Kosovo issue?

Germany primarily works closely with its partners within the European Union and with which it has a special alliance. Similarly, America, as well as Canada, are our security partners within NATO. Certainly, within these partnerships, there may be different suggestions for the solution. However, one thing is certain that Kosovo-Serbian relations will in no way affect US-European relations, and even less the US-German relations.

What do you see as the biggest weakness of Kosovo society and how well do you know the situation, that is, the problems faced by Serbs in Kosovo?

The biggest weaknesses of Kosovo society include its failure to fight against nepotism, corruption, crime – thus being condemned to poverty. As far as the Serbs in Kosovo are concerned, I think that they have the same approach to their problems as the Albanians in Kosovo and that they share the same fate. They need to realize as soon as possible that both Serbs and Albanians in Kosovo are a political bargaining object used to maintain failed policies and that only together with citizens of Albanian nationality, as well as citizens of other nationalities, they must seek better solutions for a better life for all, where they will have a chance for a better life in peace and with freedom based on the principles of democratic values.

Thanks for talking to KoSSev. 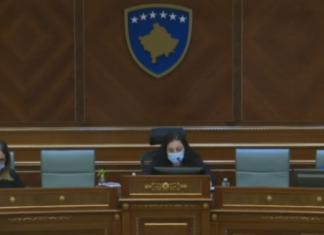