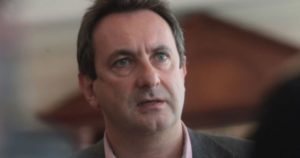 We could be approaching a crunch point in Kosovo – Serbia dialogue following the meeting yesterday in DC between Hashim Thaci and Aleksandar Vucic. Land swap was discussed plus of course the instant lifting of tariffs without reciprocity. No Serbian recognition of Kosovo but Serbia would not prevent UN accession and if that is the case then it is not expected Russia (or China) would veto – a world-renowned journalist and publicist, Tim Judah said today, citing a well-informed source. In a similar tone, Pristina journalist Jeta Xharra posed several questions to Hashim Thaci, while different messages arrive from the two presidents currently staying in Washington.

A grand deal is on the horizon, but Thaci cannot deliver it?

“We could be approaching a crunch point in Kosovo – Serbia dialogue following the meeting yesterday in DC between Hashim Thaci and Aleksandar Vucic. Richard Grenell and Trump’s people would like to move quickly to a grand deal. The problem is that Thaci is a lame duck president who cannot deliver anything – unless he can lure the LDK to jump ship and bring down Albin Kurti’s government,” Judah tweeted his findings on the alleged subject of the talks between the two presidents.

“Land swap was discussed plus of course instant lifting of tariffs without reciprocity. No Serbian recognition of Kosovo but Serbia would not prevent UN accession and if that is the case then it is not expected Russia (or China) would veto,” he said.

“No discussion of Association of Serbian Municipalities but then no one will care about Serbs in KS if there is a land swap even if the majority remain in Kosovo,” he added.

Tim Judah confirmed for KoSSev that his tweets were based on „a good briefing from a very knowledgeable source.“

“ I think this is all the stuff they talked about and it is what they want to happen but whether it will, is another thing,” he said, adding that he does not know when such an agreement might possibly take place.

According to Judah, Thaci would “like to hurry” because “his time is trickling to an end”. He said that he believes there might be some people in the PDK “who want this and an end to Albin Kurti’s admin before any anti-corruption investigations kick in.”

“Even, because if they have reason to fear the Specialist Chambers, then they might hope that cooperating on this with the Americans would give them some measure of protection. I am just speculating of course! Watch this space,” he concluded.

“Wrong. You don’t know what you are talking about. No one is trying to move quickly and there is no grand deal. You are making stuff up,” Grenell responded to Judah via Twitter.

Xharra to Thaci about a draft agreement: in return for recognition by Serbia – Leposavic in Serbia, another Serb municipality in Kosovo…

A journalist from Pristina, Jeta Xharra posed several questions to Thaci on her Facebook page. In addition to asking him why the information on the negotiations with Aleksandar Vucic is not transparent, Xharra also claimed that she has information on an alleged draft agreement between the two parties on what is allegedly supposed to be done in „exchange for recognition by Serbia.“

According to the allegations presented in this plan, the draft agreement leaves Leposavic in Serbia proper.

„Are you aware that you are signing agreements that you cannot apply?“; „What is the likelihood that you will sign such an agreement and end up in the Specialist Court again?“ – these are a few of the nine longer questions Xharra addressed to the Kosovo President.

She also requested confirmation that Thaci had been questioned – at least once – before the Specialist Court in Pristina and once in Vienna.

There are opposite messages sent by the two presidents across the ocean to their home public. Serbian President, Aleksandar Vucic and his Kosovo counterpart Hashim Thaci described their Washington meeting as “ordinary”. Prior to yesterday’s meeting, the Serbian president confirmed that he had „seen Thaci a thousand times“ and that a meeting with Thaci was „not news.“

On the other hand, Hashim Thaci described the meeting as „appropriate, constructive, without anything special.“

The President of Serbia also emphasized on Monday that „there is no discussion of essential matters without abolishing the tariffs,“ adding that he expects new withdrawals of recognition of Kosovo’s independence shortly.

Vucic’s announcement was confirmed this morning after the Serbian Foreign Minister revealed that another country revoked its recognition of Kosovo.

The President of Serbia also admitted that the idea he advocated for – “delimitation” – or the plan for Kosovo – „suffered defeat“.

Delimitation or partition is a term used by Serbian officials, while Pristina talks about recognition of Kosovo, and Hashim Thaci, along with several international lobbyists, used the term „minor border correction“ and „land swap“.

We could be approaching a crunch point in Kosovo – Serbia dialogue following the meeting yesterday in DC between @HashimThaciRKS and Aleksandar Vucic. @RichardGrenell and Trump people would like to move quickly to a grand deal. Problem is that Thaci is a lame duck president…1/5