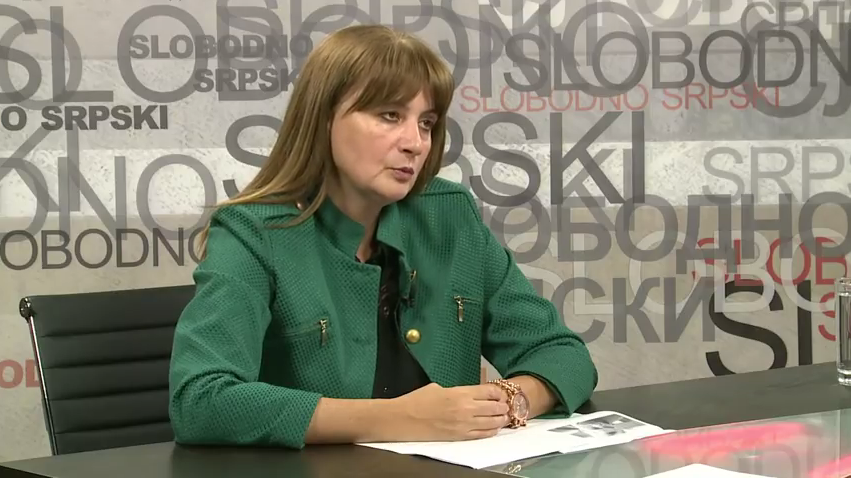 The surveillance cameras at the time of the murder of Oliver Ivanovic, installed at his party’s premises had been turned off, but then were on only ten minutes later – stated Ksenija Bozovic, the deputy of Ivanovic on the answer given by the Prosecutor following their question, ‘what had been seen on the footage?’ Bozovic spoke about the murder of the Serbian politician and the investigation in the latest „Slobodno srpski“ talk show.

„I received this answer – that our cameras were not functioning on 4th January until 10 minutes after the murder of Oliver Ivanovic took place. This was also confirmed by some international representatives. I have not seen the footage though, “ she said, adding however:

„But, considering that I know Oliver Ivanovic personality and that we all knew that he received different threats, he wouldn’t allow these cameras to be out of function for 12 days because of all of us“.

She repeated numerous criticisms against the investigation raising her objections from the moment she had spotted the bullet shells at the scene and the ignorance of a police officer on duty, the late arrival of police officers, a phone call of one of them, an unsecured scene, statement taking, and her request for the camera receiver from Ivanovic’s office to be returned four months after the investigation.

Bozovic believes that the investigation has been diluted and that there is a ‘leakage of information’.

„Can you imagine, for example, that some citizens in Mitrovica know what we had been talking to the Basic Court about, so my impression is that the transfer of the process to the Special Prosecutor’s Office has been done due to such leaks taking place in Mitrovica.“

She described Ivanovic’s murder as „a systematically organized, political professional murder planned over multiple months“ and confirmed that he was under surveillance and was aware of it.

„Oliver Ivanovic was publicly surveyed. When a meeting with General KFOR was scheduled after his release from the prison, he saw people watching him. Now, we have the information that the same people who were walking after him were in front of our premises as well. Oliver knew he was under surveillance, but Oliver was a fearless man. When we talked about it, he usually said that those were some kids sent to watch and follow,“ Bozovic said.

Asked to confirm if she was talking about the meeting between Ivanovic and the KFOR general that was reported by TV Most under the title „Did Ivanovic make a deal with KFOR and Pristina on the occupation of the north of Kosovo?“ Bozovic responded:

„That’s exactly what the TV aired, that Oliver Ivanovic ‘sells the north’,“ she said.

„Two days after the murder, I was in a meeting with (President of Serbia Aleksandar) Vucic and asked – what will the state do to find a killer and combat the criminals in the north? I was told that Serbia would do everything to identify the perpetrators as soon as possible, „she recalled the meeting in the north of Mitrovica. Vucic told her to begin fighting crime first in his own ranks, stated Bozovic.

Asked who he meant when he said „in his own ranks,“ Bozovic said „Srpska lista and SNS“.

„But until now the citizens have not seen it and it is important to see that something is being done on the ground,“ she added.

There is a fear of people in northern Kosovo after the murder which results in an increase in the sale of property and the departure of Serbs.

„This is what makes me very worried, and I’m concerned that nobody deals with this issue,“ she said.