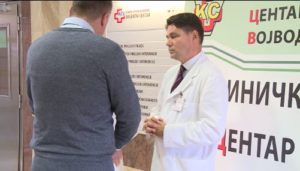 10:40 – This morning, the Minister of Internal Affairs of the Republic of Serbia, Nebojsa Stefanovic confirmed that four suspects have been identified and arrested in relation to the attack on two Albanians in the early morning on Sunday.

„The Ministry of Internal Affairs officials from Novi Sad have cleared the case of the attack on two Albanians who were beaten in Futoska street. The police, after hours of intensive investigation have identified and arrested four persons who are suspects in this case. In addition, the clothes the attackers wore on Sunday night were found which is extremely important for the continuation of the investigation. Based on interrogations of the suspects and one of the victims, the investigation so far points to the conclusion that the incident was not ethnically motivated. The police will investigate all angles in detail and uncover the full truth.“

Two Albanians in their late teens were attacked and beaten in Novi Sad on Sunday morning. Both sustained injuries and while one of them was released from hospital, the other sustained serious injuries and has undergone surgery. The 19-year-old is now in a stable condition. Although an isolated event, the attack is suspected to have been triggered by no other cause than the two young men speaking Albanian, says the Association “Matica Albanaca Srbije”. The victims’ ethnicity gives an insidious undercurrent to the incident which is why an avalanche of reactions from different political and institutional parties in Serbia followed with the strongest condemnation and a pledge for an urgent investigation, a swift and strong response from the authorities.

The young man was hospitalized with a skull fracture and in a life-threatening condition, while his friend, although willing to speak to a journalist from N1 he feels his safety is threatened and agreed to speak on the condition of full anonymity.

He testified that there had been no previous interactions between the attackers and themselves and that the attackers simply crossed the street posing the question: What is your problem and then started beating them.

“According to what I know based on the conversation with the young man with less serious injuries, the reason for the attack was exclusively due to the fact that the attackers heard them speaking Albanian. The other man who sustained serious injuries does not speak Serbian very well. Unfortunately, he arrived to Novi Sad three days ago,” said Demo Berisha, the President of Matica Albanaca Srbije yesterday for N1.

Both victims are from Prizren, which the seriously injured young man left for the very first time only four days ago to come to Novi Sad seeking a job.

Asked by the N1 journalist if the incident changed his perception of Novi Sad as a place he once chose to live in, the young Albanian said:

“Well… for a moment, I have to be honest… it has changed, but… on the other hand, there’s good people as well, for example, the doctors and how they treat Albanians. We are the same people. We Albanians and you Serbs. We are the same, we are humans. That is it.”

Numerous reactions of the authorities and political organizations in Serbia

The attack and the suspected ethnic-based motive of the attack have solicited reactions from numerous figures of authority and political organisations in Serbia.

The President, Aleksandar Vucic, requested the attackers to be identified and “drastically punished.” He emphasised that it will be difficult to request Kosovo Serbs to be protected if such attacks start happening in Serbia.

The Mayor of Novi Sad, the Vojvodina province Ombudsperson and Serbia’s Commissioner for equality and Vojvodina Mufti Muhamed Ziljkic condemned the attack as well.

Social Democrat League of Vojvodina, Movement of the Centre, Citizen block 381 and the Serbian right wing reacted yesterday as well all requesting swift reactions and a thorough investigation.

Two ethnic Albanians assaulted in Novi Sad, one of them in critical condition