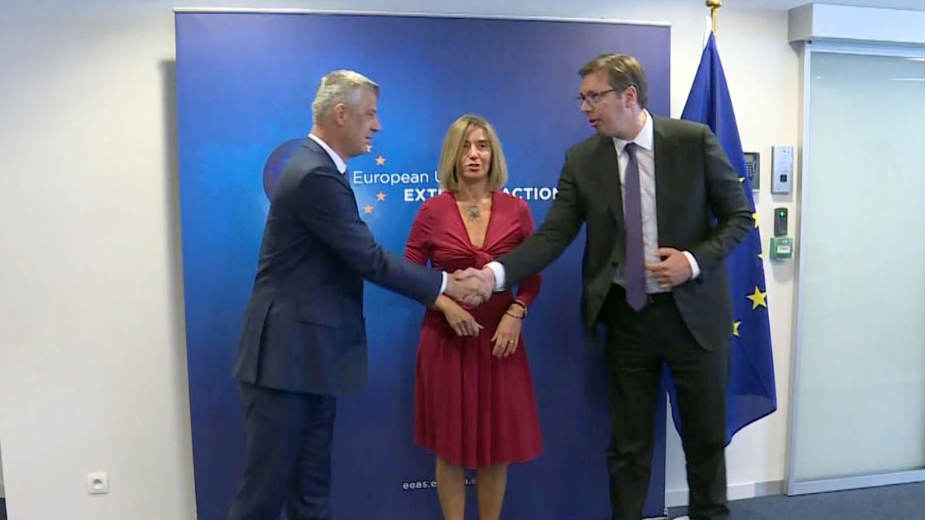 Kosovo’s leaders have got themselves in a serious political crisis. They need to re-set the clock and the agenda of talks with Serbia, write Leke Batalli and Perparim Kryeziu.

Leke Batalli and Perparim Kryeziu are Research Fellows at the Group for Legal and Political Studies in Pristina.

Kosovo finds itself tangled up in an unprecedented political crisis. The possible conclusion of its dialogue with Serbia has further divided the political landscape in Kosovo, while a silent Serbian President Alexander Vucic is reaping the benefits of reintroducing the idea of border corrections.

In an attempt to hide the recent diplomatic failures of the government crowned by its failed bid to join Interpol, the Government of Kosovo introduced a 100% tax to all products coming from Serbia or Bosnia and Herzegovina.

The rationale of the tax was that for as long as Serbia was leading a campaign to undermine Kosovo’s statehood, the latter had to utilize the only available tool that was at our disposal, halting Serbia’s imports.

The tax was welcomed by the citizens in Kosovo but not by the international community. The EU demanded that the tax be scrapped immediately – arguing that otherwise, Serbia would not return to the negotiating table in Brussels. The government dismissed the request.

However, soon the US followed suit, and divided the main leaders of the governing coalition, Kadri Veseli and Ramush Haradinaj. The latter was standing by his decision, while the former said that, to protect the alliance with the US, Kosovo had to reconsider its position.

On another note, the UK and Germany have not pressured Kosovo to take back the tax decision. These stances are reflective of the positions that the countries have taken in relation to the idea of correcting the borders.

For the first time, countries that have traditionally supported Kosovo’s state-building are not seeing eye to eye on the topic of dialogue. Federica Mogherini’s office and actors within the US administration are looking forward to an agreement between Kosovo and Serbia, even if that means that to arrive there the borders need to be changed, while Germany and the UK are openly against a deal that would redraw the borders.

What is most baffling however are the negotiating positions that Kosovo and Serbia are taking. Serbia’s President Vucic continuously reiterates that the chances of an agreement are slim and is mainly silent, while Kosovo is in a rush to conclude the dialogue in the coming months.

President Hashim Thaci’s persistence to conclude the dialogue with a comprehensive agreement is also shared by Mogherini’s office. The latter’s term is soon ending and her track record during her reign as the High Representative of the European Union for Foreign Affairs and Security Policy is lacking any significant achievement.

Her urgency to end the dialogue appears to be driven by personal ambitions instead of facilitating a thorough, long term and sustainable solution between the parties.

Similarly, her predecessor, Catherine Ashton, a year before her departure from the office, facilitated and endorsed the first International Agreement of Principles Governing the Normalization of Relations between Kosovo and Serbia.

Soon after the adoption of the agreement, its dubious character came into surface. Implementation of this agreement, it was argued, would require the establishment of an Association of Municipalities with a Serbian Majority with a legal possibility of acquiring executive competences.

This scenario prompted political and social turmoil, making the ratification of the other agreements impossible.

Prime Minister Haradinaj has not shared Thaci’s position since, by vehemently opposing any idea that includes border revision. However, he did not question President Thaci’s role in the dialogue. Alternatively, he requested an International Conference with the purview to finalize the eight-year-long dialogue within the time frame of fourteen days.

But his call is just as equally dangerous given that it may well produce the same outcome that Thaci wants, if not worse. An International Conference would bring Kosovo back to ground zero, question its international legal identity and prioritize the international consensus over that of Kosovo’s national interest.

As things stand, Kosovo is perceived not only as immature in state affairs, with its leaders pushing different agendas internationally, but also as unconstructive. Marked by domestic animosity and in the midst of what seems to be a paradigmatic shift in US foreign policy, Kosovo’s position has never been worse.

Concluding the dialogue could have dire consequences. In order to overcome this, Mr Haradinaj should introduce a baseline for restarting the dialogue, including a timeline of issues to be discussed with Serbia. For as long as the latter conforms, the tax can be removed.

The initiative would have domestic ownership and Haradinaj’s position would be intact. More importantly, Kosovo would buy time to achieve something resembling a consensus.