A total of 17 cases of domestic violence were registered in the north of Kosovo between January 1st and March 31st – 9 more cases compared to the same period of last year. Undoubtedly, the coronavirus pandemic is one of the reasons there has been an increase in the number of abuse cases, the Kosovo Police spokesman for the region north, Branislav Radovic said in an interview with KoSSev.

World experts have been warning that the coronavirus pandemic – a time during which citizens are urged to stay at home as much as possible – may increase the number of domestic abuse cases. The statistics for the first three months of 2020 show that the domestic violence cases in the north of Kosovo have increased – compared to the same period last year.

In the period from January 1st to March 31st, 17 cases of domestic violence were registered in the north of Kosovo: 11 in North Mitrovica, 4 in Leposavic, and one in Zvecan and Zubin Potok each. By April 20th, 2 more cases were registered.

On the other hand, only 8 cases were recorded in January-March of last year: 4 in North Mitrovica, three in Leposavic, one in Zvecan, while no cases were registered in Zubin Potok.

In 2019, a total of 55 domestic violence cases were recorded.

Radovic said an increase in the number of domestic violence cases has been recorded ever since the coronavirus appeared in the region, noting that citizens spend the majority of the day in their homes.

The Kosovo Police spokesman also stressed that in several cases, the domestic violence perpetrators were under the influence of alcohol, adding that police officers dealing with these cases are „handling it well“.

„While speaking to them, I got the information that everything is very complicated, especially at this moment where families are crammed in a small home atmosphere because the pandemic has forced us to do so – also because of the curfew.“

„We have a sufficient number of police officers. It would not be a bad thing if there were more of them, as well as a larger number of vehicles… but we assess that they did a very good job and that they were even tolerant when it was needed.“

On the other hand, he claims that a smaller number of violations were registered – failure to comply with the 90-minute timeslots the citizens are allowed outside.

„There hadn’t been many of these violations when compared to the size of the town, the needs, and normal life,“ claimed Radovic.

At the same time, he estimated that the police provided the necessary information on the implementation of this measure to the citizens.

„In the beginning, there was a big problem – ‘why was this measure adopted’… I talked to everyone, I told them to be calm and to be nice to the police,“ he said.

„If someone has a problem, his head hurts, he has health issues, which police officer would stop him, no one would?!“ – Radovic cited as an example of police tolerance during the outbreak.

According to Kosovo Police statistics, 169 such cases were recorded in March, 18 more compared to the previous month. 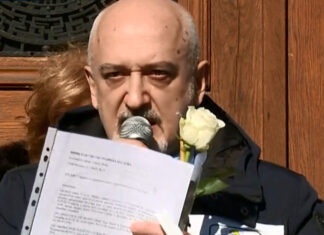