„We were able to ensure the normal supply and functioning of our institutions and health care facilities in conditions of a complete blockade,“ the head of the Kosovo Office, Marko Djuric told Prva TV.

Speaking about the coronavirus pandemic preparations and measures taken in the field, Djuric said that hospital beds were prepared at the North Mitrovica Clinical Center and the Student Center. He also revealed that similar preparations were made in central Kosovo, in Pomoravlje, Pasjane, and Gracanica.

Djuric urged Serbs in northern Kosovo to respect the measures taken by the Serbian government and to respect the curfew, noting that the “lives of our oldest fellow citizens depend on it.”

He added that people should not have the dilemma of whether they should respect the curfew because those who do not do so „will face measures envisaged for such a thing.“

The head of the Kosovo Office said that a health care network has been established in Serbian institutions in Kosovo:

„A complete health care network was organized within Serbian institutions – Gracanica, Pomoravlje – a center in Pasjane, North Mitrovica Hospital Center. The Serbian Ministry of Health has provided the necessary instructions and algorithms. The Kosovo Office also organized the service of additional doctors and medical staff to Kosovo.“

There is now more medical staff at individual centers than under normal conditions, Djuric added.

He emphasized that Kosovo Serb communities are „much better prepared“ to face the challenges related to the Covid-19 pandemic, while „Albanian communities are engaged in politics, some party divisions, some other ephemeral things”.

Djuric also expressed concern that these areas could become a hotbed of infection due to official Pristina engaging in a “games of throne” and its lack of focus on the coronavirus pandemic.

He revealed that they would provide the necessary food supplies, such as flour, as well as financial resources.
„Don’t ask how, but we have managed to ensure that a sufficient amount of dinars and everything else has arrived in Kosovo,“ he stressed.

Djuric: Who can reasonably expect Srpska Lista to show confidence in the government?

„Some are attacking Srpska Lista today for failing to show confidence, for voting against the government of Albin Kurti,“ Djuric said, speaking about the latest political events in Pristina.

“Who can reasonably expect Srpska Lista to trust the government whose first move was to introduce obligatory military service for all citizens, which as – one of the first measures – increased the budget for the procurement of arms and equipment? A government that did not abolish tariffs, which did not even want to sit down with the Serbs to discuss the priorities of their politics and survival in Kosovo, even formally with a photograph, at least, or to pretend even for the international public? They were not even ready to do that,“ he underlined.

On the other hand, he advised Srpska Lista „not to interfere in political conflicts among Albanians and to stay away and not to engage in Albanian-Albanian conflicts“.

„First and foremost, Srpska Lista must take care of Serb interests, and the Albanian people need to choose who will represent them,” Djuric concluded. 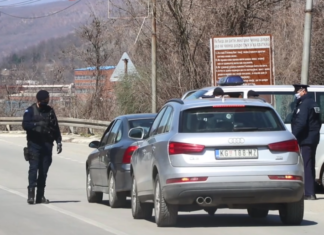