“The international community has instrumentalized heralds in Kosovo who support Kosovo’s independence,” the Head of the Kosovo Office, Marko Djuric stated yesterday, expressing his disagreement with their actions and claiming that he is not jeopardizing anyone by saying it openly. On the eve of the World Press Freedom Day, Djuric stated that „many in the international community are instrumentalizing certain political circles and using social networks and certain media to promote political attitudes that are not in the interest of citizens of the north of Kosovo and which are not in accordance with the attitudes of the state of Serbia.“ This official further claimed that the recent statements by the high level state officials on the Serbian media in Kosovo „do not endanger these media,“ as they represent the voicing of „a different political attitude.“

When asked by N1 journalist, Tatjana Aleksic whether the state is jeopardizing journalists in the north of Kosovo when labeling them as being part of a foreign espionage networks, Djuric replied that “there are many people in the international community who, by instrumentalizing certain political circles, using social networks and certain media, want to promote political views that are not in the interest of citizens of the north of Kosovo and are not in accordance with the attitudes of the state of Serbia.”

Unlike the „heralds“ who openly support the independence of Kosovo, the statement of the Defense Minister, Aleksandar Vulin on the delimitation with the Albanians is “not anti-constitutional” – according to Marko Djuric. Djuric said during a press conference yesterday that Vulin’s statement is „rational“ and represents an expression of „personal attitude.“ Read more about it in: Djuric: Vulin’s position on delimitation is rational.

„There are those who benefit from having heralds who will support the independence policy of Kosovo and Metohija. I do not approve of that. Does the fact that I say this to you openly threaten anyone? I think it is absurd to talk about jeopardizing someone’s security just because I dare to express a political attitude – that I disagree with that,“ Djuric said.

Serbian President Aleksandar Vucic stated a week ago that the media in Kosovo receive millions of dollars to “destroy Serbian unity and the reputation of Srpska Lista.”

Srpska Lista is the only Kosovo Serb party which registered to participate in the Kosovo elections for mayors in the four northern municipalities on May 19th.

Until now, Serb unity has been the main message during every election campaign.

During the pre-election campaign of the last Kosovo elections held in 2017, the SDP leader, Oliver Ivanovic, as well as all potential voters, were portrayed as the main destroyers of Serbian unity.

“Ivanovic undermined Serbian unity with his mentors in Pristina”

Srpska Lista accused Ivanovic of „staying quiet to protect his position and interests while Serbs were being expelled“ during the 2004 violence and of trying to „perfidiously and conniving to undermine Serbian unity“ in his quest for power.

„I suggest that he try to do this with his mentors in Pristina, where he was a deputy in two terms, at a time when violence was committed against Serbs in Kosovo and Metohija in 2004 and the government of Ramush Haradinaj. And he should let Serbs choose their own representatives. The Serbs confirmed on Sunday that they want to continue the policy of unity and the joint struggle for Serbian interests in Kosovo with their government in Belgrade and President Vucic,“ Srpska Lista stated at the time.

On the other hand, when N1 journalist stated yesterday that Oliver Ivanovic was once labeled as „the enemy of Serb interests in Kosovo“, and whether he now believes that this campaign did not endanger him, Djuric replied that connecting different attitudes about local elections and murder is “shameful.”

The Head of the Kosovo Office further claimed yesterday that the campaign is being conducted today with the sole intention of discrediting those who are „fighting for Kosovo and Metohija,“ and that it is „led by someone who wants to collect cheap political points.“

NUNS: President of Serbia to apologize to journalists from the north of Kosovo

NCEU concerned over Vucic’s accusations against Kosovo Serb media: The attack on journalists has damaged Serbia’s reputation in the world

Vucic: „The espionage media networks in Kosovo are the main providers of information in central Serbia and they are breaking the Serbian unity“

Vucic: Foreigners created a large number of media in the north of Kosovo just to destroy Srpska Lista

Serbian President on Kosovo Serb media again – What did he really say? 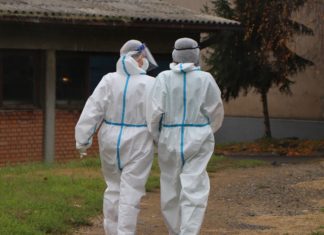