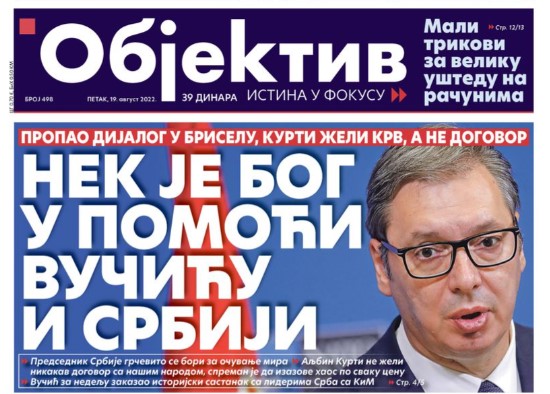 Following yesterday’s hours-long meetings between Serbian President, Aleksandar Vucic, and the Kosovan Prime Minister, Albin Kurti, held in Brussels under the auspices of the EU, the Serbian tabloids and newspapers, with one notable exception, have extensively been reporting about the “failure of negotiations,” Vucic’s “desire to find a solution” and the absence of Kurti’s will to do the same.

Today’s front pages of these newspapers underlined that „Kurti wants war“, along with headlines and subtitles on how the Prime Minister of Kosovo rejected all proposals to reach a compromise, and the President of Serbia is the one who advocates for peace, that he will address the public today and meet with the Serbs from Kosovo tomorrow. 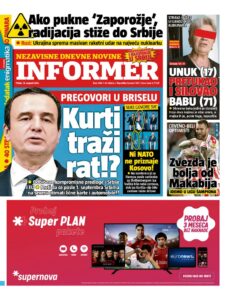 The cover of Informer tabloid, in capital letters, announces: „KURTI WANTS WAR?“ The subtitle adds that Kurti rejected all compromise proposals from both Serbia and the EU. The same tabloid claims that he is also threatening to confiscate ID cards and vehicles from Serbs after September 1st.

Informer also remarked that at the press conference of NATO Secretary General Jens Stoltenberg, at the place where the Serbian flag was previously located, when Stoltenberg spoke with Vucic, another NATO flag was displayed, given that the KFOR mission in Kosovo, has a clear mandate, which is Resolution 1244 of the UN Security Council, as per which Kosovo is not recognized as an independent state.

„The pictures say it all“ – „Not even NATO recognizes Kosovo. At the press conference after the meeting with Stoltenberg, our flag was behind Vucic, there was no flag of a fake country behind Kurti,“ writes Informer. „KURTI WANTS CHAOS ON KiM – NOT A DEAL“, states the headline on the cover of Vecernje Novosti with the subheading that Pristina „mined the dialogue“, „Vucic addresses the public today, meeting with Serbs from the province on Sunday“ and „Petkovic: We thought that a compromise is possible, we fought for peace“.

„PRISTINA’S GUNS DRAWN“ – reads the threatening message sent by Blic with a photo of Kosovo special forces on the move. „Special Kosovo units on standby, equipment for taking down barricades is being delivered“. Apart from underlining that the negotiations are unsuccessful, and that there is no agreement, „because Kurti refused everything“, Blic also reports about „nervousness in Kosovo and Metohija“, which is why Vucic will „meet the Serbs from Kosmet“ this Sunday. 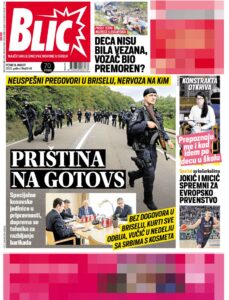 „WAR BEGINS IN KOSOVO?“ – reads the message on the front page of Srpski Telegraf with the explanation that Vucic „wants peace at any cost“, and „Kurti wants blood“. „Dangerous – Kurti did not want to compromise on any issue in Brussels; Urgent – The President called a meeting with the Serbs; Extraordinary – Vucic will give the most important address to the nation today“.

Belgrade-based tabloid Kurir took on a somewhat milder tone: „TREPIDATION“ – „no compromise in Brussels“. „Kurti refused any agreement, Fear of occupation of the North of Kosovo is growing, Vucic to meet with the leaders of the Serbs on Sunday“. In the smallest of letters on the cover, it also announces: „Aleksandar Vucic tried to find some kind of solution with the Pristina side, but they don’t have the will for it,“ and „Josep Borrell: We did not reach an agreement, but that is not the end of it.“ Although with different words, Alo tabloid sent the same, but mocking, message: „KURTI PLAYACTING AS ZELENSKY“, along with Zelensky ‘reply’, written in a comic bubble: „Woe is me if Kurti is copying me“.

The cover also includes: „the prime minister of the fake country received two slaps in Brussels“, and „FARCE: PRISTINA’S CLOWN PLAYING THE VICTIM IN BRUSSELS“. It also announces that Vucic will inform citizens about the negotiations tomorrow, and meet with Kosovo Serbs on Sunday.

The oldest Serbian newspaper „Politika“ announces on its cover: „ROSU and KSF occupied the North of Kosmet, while KFOR increased its presence“ – in line with the recent claims made by Kosovoonline, which were also denied by the Kosovo Minister of Defense, and KFOR. 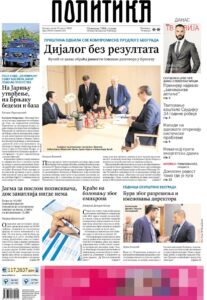 „Fortification on Jarinje, ramparts and bases on Brnjak“ reads the title on the front page of Politika, along with the central report that the dialogue is „without compromise“. „PRISTINA REJECTED ALL OF BELGRADE’S COMPROMISE PROPOSALS,“ with the subtitle that Vucic is addressing the public today.

The Danas newspaper was the only one with a differing narrative. For the negotiations in Brussels, instead of describing it as a failure, Danas states that the negotiations will continue, with the headline: „The EU is looking for a solution and Vucic and Kurti desire tensions“. 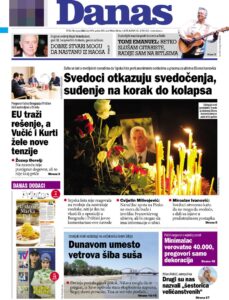 The central text on the cover, however, deals with the trial for the murder of Oliver Ivanovic:

„Witnesses cancel their testimonies. A trial on the verge of collapse“.

„Why is there no reaction to media allegations that Srpska Lista is threatening anonymous witnesses in the trial for the murder of Oliver Ivanovic,“ reads the cover of Danas.
We end this review of the front pages of daily newspapers in Serbia with the headline from Objektiv: „May God help Vucic and Serbia“.
The tabloids, however, deemed what EU representative Josep Borrell said while addressing the public yesterday after almost seven hours of talks in Brussels as not ‘newsworthy’ (with the exception of Alo).

Which is no wonder considering that ’war’ is apparently pending.