Three brawls took place in the centre of North Mitrovica in just two days. The latest one occurred today, when a policeman wearing plain clothes used the handle of his service pistol as a cold weapon. The policeman also fired a shot into the air during the brawl. The circumstances still remain unclear. Police sources and a mother of two of the actors in today’s incident presented conflicting statements, as did Aleksandar Arsenijevic, the brother of the alleged injured party, who claims that the incident started after he himself was allegedly threatened and attacked by two policemen wearing plain clothes – for reasons “unclear to him”.

What was officially confirmed

At least 15 persons have been questioned since Sunday night – when the first and the largest incident took place on the St. Peter Street pedestrian zone, in which one person was seriously injured. At least two suspects are at large, and at least one other person sustained slight injuries. A firearm was used in today’s brawl, during which a shot was fired into the air, and a member of the Kosovo Police who was wearing plain clothes was involved in the incident. There are still no details, however, about the role this police officer played in the event.

These are the only officially confirmed police information so far.

How did it all start? Why? Who are the attackers? Who are the victims? Are all three fights interconnected? The answer to these questions still remains unknown.

Mother: „He threatened he was going to kill my children“

Shortly after today’s incident, at the location, one woman fell ill on the street. She received help from the police in the field, who also called an ambulance.

Although it seemed that these were two separate events, after the woman recovered, she claimed to our portal that she was an eyewitness to the incident, but also the mother of two young men who were involved in it.

A mother of two of the actors in today’s incident and an eyewitness, Suzana Pejovic told KoSSev that her sons were „threatened“ today by a member of the former ROSU unit, an ethnic Serb. Pejovic emphasized that her sons were threatened for allegedly „protecting the children“ of a former senior Kosovo police official for the region north.

„He came by, accompanied by another policeman (cf. the names are known to the editorial office), practically on the doorstep of the Bulatovic house (her family), about ten meters from my cafe, which is located next to our arcade. My children were out front and when the discussion started, I intervened. There was a fight two nights before, and he (cf. a member of the former ROSU unit) reported that my son had a knife on him and that he had attacked him. I simply told him – bring a recording to verify that claim. He got upset when I told him that. He told me that my sons were protecting the children of a John Doe (cf. name known to the editorial office). He said that ‘blood will be shed.’ He swore on his children that he will kill my children. A man from a fast food bar next door reacted when he saw that he was getting in my face, and then the policeman took out a gun and pistol-whipped him, and then fired a shot into the air. There were a lot of police officers there and they overpowered him. My younger son filmed it on his phone, and this other policeman, after noticing that my son was filming, went after him. After my son entered the cafe, he also came in and asked him to delete the recording. He also asked for his phone. My son didn’t want to give it to him, and then this policeman also pulled out a gun. There was a guest in the cafe, who intervened and separated them and calmed them down.“

Pejovic claims that they have a recording in her son’s phone, and that her son is still being questioned by the police. She also added that she will testify about what she saw.

Pejovic furthermore accused some members of the police for allegedly „covering up the case“.

„I have to protect my children. He said he would kill them, and I said that I would call all the media and tell them about what I saw,“ said Pejovic.

Arsenijevic: They threatened and punched me, pistol-whipped my brother and fired at us in full view of policemen

In the meantime, another alleged participant in today’s incident, a fellow caterer, Aleksandar Arsenijevic, the cousin of the owner of the fast food bar, who was reportedly pistol-whipped, also shared his testimony with the KoSSev portal. Arsenijevic revealed that his brother has been hospitalized in the North Mitrovica hospital center. He also sent us a photograph of his injured brother and video footage in which the gunshot can be heard. 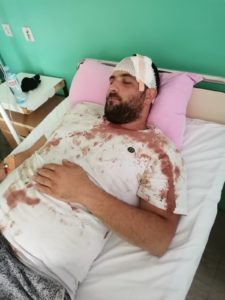 Arsenijevic’s testimony differs from Pejovic’s, with conflicting details in some of it.

Arsenijevic said that the incident originally broke out in a different place and under different circumstances – while he was in a cafe on the pedestrian street with his cousin, when he was approached by a member of the former ROSU unit and another policeman in plain clothes (cf. names known to the editorial office), who threatened him while “clenching guns”. He revealed that this happened only after they passed by him several times, and that at the time his cousin left him shortly to go to the toilet.

He claims that he „does not know“ the reason he was threatened.

Arsenijevic underlined that he then fled to the fast food bar owned by his brother, knowing that the bar has a surveillance camera. He stressed that the police soon caught up with him. The fast food restaurant is located at the corner of Lole Ribara and St. Peter Street.

“A ROSU member in civilian clothes told me that he would thrash my cafe and kill me,“ he said.

Arsenijevic said that they asked him „why is he running away from the police,“ to which he replied that they were wearing civilian clothes and that they reportedly did not show him any IDs.

He stressed that he asked for help from uniformed police officers, stationed near the roundabout.

„A member of the (former) ROSU unit punched me in the stomach and said ‘I am the police’. At that moment, the Bulatovic’s came out to film, I told them ‘film this, you have the right to do that’. I asked him (a member of the former ROSU), ‘what is the problem’, he kept getting in my face and threatening me, he kicked me once. He went to Suzana Pejovic’s house, and since he failed to get the phones that were used to film him, he called the police, who started seizing the phones at his command.“

He also claimed that another policeman in civilian clothes allegedly punched him in the head, after which his brother, the injured N.M., who caught up with him after trying to escape from the police, intervened.

„At that moment, my cousin, with whom I had coffee earlier, came along and tried to drag me away from him. They pepper-sprayed us, I don’t know who exactly,“ he explains further.

He alleged that a member of the former ROSU unit then pistol-whipped his brother, cocked the pistol and pointed it at Arsenijevic. By his own admission, Arsenijevic tried to escape again when he heard the gunshot.

„I started to flee and at that moment I heard a gunshot, my brother also fled, because we were shot at in full view of 20 policemen,“ he explained.

Arsenijevic said that after the situation calmed down, he went to the police station with his injured brother and lawyer where they were classified as suspects.

Apart from claiming that he „does not know“ the reason for the alleged attack by police officers wearing plain clothes, Arsenijevic also said that neither he nor his brother were involved in previous brawls in the center of North Mitrovica. He also emphasized that both he and his brother were unarmed.

Police: Colleague called in that he had a problem with two people, one had a weapon, the police reacted in a timely manner

The police, however, stated differently while simultaneously confirming that a service pistol had been used, and that uniformed police officers asked the police officer in plain clothes involved in the brawl to return the gun to its holster.

As the Kosovo Police for the region north told KoSSev, a member of the former ROSU unit, an ethnic Serb, who was wearing plain clothes, called the police station in North Mitrovica today at around 12:50h, and informed them a „verbal argument between him and two men“ took place at the intersection of King Peter I and Lola Ribara Street.

According to police sources, the police officers approached the two men and their colleague, who then informed them that he has „a problem with these persons, one of whom is carrying a firearm.“

„Meanwhile, a colleague in plain clothes took his service pistol out of its holster and released the safety, holding it in his hand. Patrol officers demanded that he return his gun to its holster. In the meantime, a third person approached and swore at our colleague, and then a colleague shot a bullet into the air with his service pistol and used it to hit the person who last approached the patrol in the back of the head,“ the police told KoSSev.
After receiving a blow to the head, this man allegedly fled.

The police once again emphasized that they are doing their job professionally. They also added that they cannot disclose more details while the investigation is ongoing. The police dismissed the accusations of alleged unprofessional conduct.

A common police procedure when searching for suspects – the Ring of Steel – is currently in force.