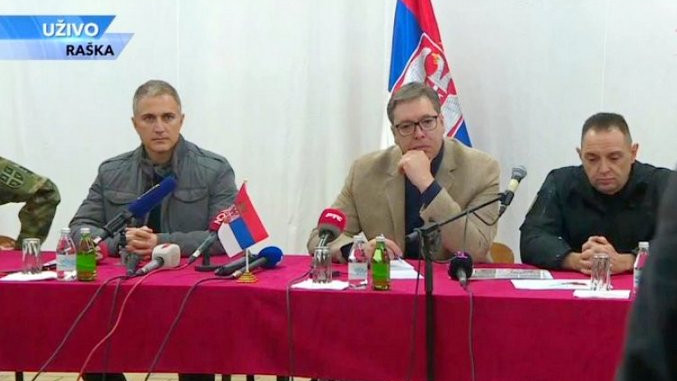 „Should they start carrying our children and us out of our Kosovo in coffins for you to stand behind us and protect us; If you intend to defend and protect us, we ask you to do so; Stand by your people until it is too late, so that there is no Storm, there is no pogrom and we don’t start carrying our children out in coffins“ – a group of citizens from the north of Kosovo told the President of Serbia, Aleksandar Vucic, today in the army barracks in Raska.

The President of Serbia met with representatives of Kosovo Serbs today, following the action of the Kosovo Police in the north of Kosovo, during which new conflicts broke out between special police units and the citizens.

The meeting was also attended by the Minister of Internal Affairs, Aleksandar Vulin, the Minister of Defense, Nebojsa Stefanovic, and the head of the Kosovo Office, Petar Petkovic. They met with top Srpska Lista officials, including officials in the Kosovo government and Kosovo municipal institutions, as well as a group of citizens from the north who came with them to Raska.

Although Vucic initially said that the meeting should not be filmed, Srpska Lista leadership insisted on it. Vucic said that he accepted their wish and request, noting however that he would not be able to reveal everything he knows and that he would discuss it at a smaller gathering without the presence of cameras.

Rakic: Cameras should be turned on so that the truth is revealed on how the bare-handed people defended themselves

The Srpska Lista chief, Goran Rakic, and other citizens from the north who went to Raska were the first to speak at the meeting.

Rakic ​​underlined that he asked the media to record today’s meeting so that „the people could hear the truth“ from the people from the north of Kosovo „who were attacked and shot at.“

SL chief said that he could understand that the special forces „clobbered with rifle butts and trampled“ over Serbs in the north but not that they would „shoot at the bare-handed people“.

If a similar situation were to take place again, Rakic ​​told the president, there will be „general resistance – whatever that means and in what context you take it.“

The President of Serbia then asked those gathered to tell him how and where the Serb from Zvecan, who is currently hospitalized at the North Mitrovica Clinical Center, sustained his injuries.

As the citizens explained, the person in question was wounded near the cross in Rudare, during the withdrawal of special forces.

Citizens of the north on Pristina’s terror, recall the promise that army will be deployed if one bullet is fired

„As they were retreating, they fired their weapons; they fired at random, at houses, at people. They wounded the boy next to us. What’s next?“ one of the citizens said.

While reminding that this is not the first time that special forces from Pristina have entered the north, the citizens also underscored they had enough, that they are tired, and called on the President of Serbia to defend them.

„If you want to defend us and protect us, we ask you to do so, and if not, we have to defend ourselves, we’re cornered,“ another citizen from the north of Kosovo said.

„Should they start carrying our children and us out of our Kosovo in coffins for you to stand behind us and protect us,“ one of the citizens asked Vucic.

„Will you, Mr. Vucic, stand behind the Serb people and the military leadership, Minister Vulin, or should we go and organize ourselves, as we defended the bridge for months, stayed at the barricades, and survived all kinds of things? Stand by your people until it is too late, so that there is no storm so that there is no pogrom and so that we don’t have to take our children out in coffins.“

„You have to defend us, we don’t know what to do,“ the citizens emphasized, noting that the Serbian president had promised to send an army if just one bullet was fired.

Milovic: Either we ask for our rights or we leave Kosovan and form Serbian institutions

In the meantime, the top leaders of Srpska Lista also spoke with the Serbian President, including the candidate for the mayor of Zvecan, Dragisa Milovic. Milovic alleged that „a war almost broke out“ in the north of Kosovo today.

„Innocent men were shot at, but one good thing in this whole awful situation is that I noticed that unity in you,“ Milovic told the citizens from the north of Kosovo.

Milovic underlined that Serbs in Kosovo have two options – to continue to „democratically“ seek their rights in institutions formed under the Kosovan system, or – civil disobedience and for Serb representatives to leave these institutions and return to Serbian institutions. The gathered citizens showed that they were in favor of Milovic’s second proposal.

Radoicic: We will defend ourselves until the end, until death

„You heard what these brave men said. I will only tell you one thing on behalf of all of them – that next time we will defend ourselves to the end, to death,“ said Radoicic.

This marks the first time Radoicic addressed the public in front of the cameras.

Igor Simic: These men „shall not wear skirts“

Srpska Lista MP in the Kosovo Assembly, Igor Simic, and the mayor of Leposavic, Zoran Todic, also urged the president to react.

„President Aleksandar Vucic, these men shall not wear skirts, they want to live a life worthy of a man, we want to live as people, if they do not allow us to live, we must defend life and the future, and how we’ll do that – we’ll see,“ Simic said.

Mayor of Leposavic: If the army can’t come in uniforms, let them come in tracksuits

On the other hand, Todic told the president that it is high time to tell the people what to do if similar things happen in the future.

He furthermore claimed that „our state, army, and police do not need 24 hours,“ and urged Vucic to „find modalities“.

„We have our soldiers and policemen, so if they can’t come in uniform, let them come to us in tracksuits, because we really need help and protection here. Nobody needs any kind of conflict, we all know very well what peace means, so I ask you all to be united,“ added Todic, the mayor of Leposavic within the Kosovo system.

Vucic: Belgrade and Serbia will stand by you

The Serbian president then addressed the gathered citizens and SL officials.

He revealed that Pristina had the support for today’s action of at least one state, noting that the country in question is not part of the European Union.

While claiming to understand the anger of Serbs in northern Kosovo, Vucic once again underlined that the most important thing is to preserve peace, noting that „we have no choice“.

He recalled that for years now, namely since 2017, he has been saying that Serbia will not allow new Storms and Flash and 2004 pogrom. He repeated the same messages today.

Addressing the citizens’ comment that he had promised to send an army if just one bullet was fired, Vucic stated:

„I did not say a single bullet. I said that we will not allow a pogrom and the killing of our people. That’s why I immediately came here and warned them and said clearly – I can’t invite you to leave conflict with anyone, I understood your decision… I’m not stupid as to not see your agreement. Of course, emotions as well, that does not mean that if there is an agreement that there is anything dishonorable in that.“

But what I can tell you – whatever happens, and no matter what happens, Serbia and Belgrade will stand with you, he added, urging Kosovo Serbs not to react to „non-violence“.

„If they continue shooting our people, then we really have no choice. In that fight in which we have to protect the lives of our children and their survival, we will not only protect, but today I tell you for the first time with certainty that we will win that fight,“ Vucic said. His words were met with thunderous applause.

What happened in the north of Kosovo today?

Police units from Pristina carried out coordinated anti-smuggling operations throughout Kosovo today. This morning, however, a clash broke out in North Mitrovica and Zvecan between citizens, primarily men, and special police units, which provided assistance to the local police and the inspection officers that tried to search certain facilities throughout North Mitrovica and Zvecan.

The fiercest clashes took place in the city center, during a search of a pharmacy owned by Albanian Besim Zeqiri, one of 10 people currently wanted by Kosovo Police.

Stones and shock bombs were thrown, at least one official vehicle with RKS plates was set on fire, while several civilian vehicles were damaged. Journalists of the KoSSev portal were prevented from reporting from the field and attacked while performing their journalistic tasks. Other media crews reporting from the field underwent similar treatment, and several such attacks went unreported.

A shooting broke out in the municipality of Zvecan, but the details on the shooting available so far are contradictory. However, all parties confirmed that an ethnic Serb sustained a gunshot wound. After undergoing an emergency operation in North Mitrovica Hospital Center, he is currently in stable condition.

In the meantime, the police announced that the action was finalised, that six police officers in the north were injured, including an ethnic Serb, and that eight people (6 Albanians, a Bosniak, and a Serb) were arrested, three of whom were from the north. A total of 10 people (2 Serbs and 8 Albanians) are wanted by the police.

The Minister of Internal Affairs of Kosovo held a press conference, saying that the action was carried out at a total of 26 locations throughout Kosovo, 9 of which were in the north, but only one was successful. He revealed that they suspect that security data had been leaked.

He also said that the action was carried out with international coordination and initiated by an allied service. The Interior Minister emphasized that the action was not aimed against ethnicity, but against crime, noting that the judge and prosecutor in the procedure were Serbs and that large-scale smuggling was carried out via the pharmacy in North Mitrovica, owned by Besim Zeqiri. Zeqiri is currently wanted by the KP.

KoSSev journalists face pressure not to report during the N. Mitrovica conflict