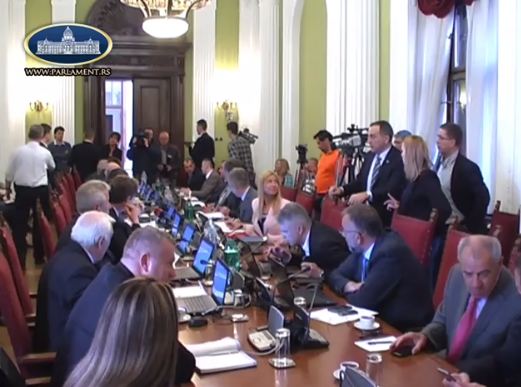 The safety situation in Kosovo is relatively stable, but also very complex and sensitive -based on a detailed analysis, the Committee on Kosovo and Metohija in the National Assembly of the Republic of Serbia estimated during a closed session today. Nevertheless: „There are serious indications of the possibility of deteriorating stability and safety of the Serbian people, the reasons for which are reflected in the general dissatisfaction of the population with the political and economic situation in Kosovo, intense inter-ethnic tensions, a complex political situation – elements that can prove to be extremely damaging in the coming period for the security in Kosovo and Metohija, especially the safety of the Serbian people. New unilateral actions by Pristina that can endanger the safety of Serbs are possible, and the permanent security risk is Pristina’s constant attempts to place North Kosovo under its control“- the statement released after the session reads.

The information this committee considered was submitted by the Ministry of Interior, Ministry of Defense, BIA, VOA and VBA.

They assessed the transformation of the so-called Kosovo Security Forces into the „Kosovo Army“ and the pressure placed on Serbs to join this formation are extremely destabilizing. They also recalled that the Kosovo Army is not in line with UNSCR 1244 and the Kosovo constitution, emphasizing that it will be „a maximum factor in endangering the safety of the Serbian people“, and that it will also disturb regional security.

The operation of intelligence services in the North

The presence and operation of the Wahhabi-Salafi groups, whose priority target are the Kosovo Serbs, was noticed. The increased intelligence activity of some Western services, especially in the north of Kosovo, with the intention of planting various misinformation and lies in order to get Serbs to cooperate and participate in the so-called Kosovo Security Forces and to distance them from Belgrade, was also detected.

According to the assembly committee on Kosovo, Pristina’s attempt to get Kosovo to join INTERPOL represents a special risk, as it would lead to an increase in the number of secret indictments against many Serbs.

They accused Albanian leaders of „aggressive rhetoric against official Belgrade“, and of running „an intense media campaign“ and creating „false news“.

Serbs in the south without freedom

Serbs south of the Ibar are living almost without freedom, their safety and movements are endangered. Albanians often attack and provoke them. There have been over 40 ethnically motivated attacks on Serbs and their property only in the last five months.

They demanded that the responsibility for the challenging economic problems „is not completely and unfoundedly passed to the Serbian people and official Belgrade“.

The Committee on Kosovo also criticized the decision of the Kosovo government to impose a 10% tax increase on products from Serbia.