Kosovo Minister of Labor and Social Care and brother of the deputy mayor of Obilic municipality, whose family was visited by Kosovo Prime Minister, Ramush Haradinaj in December, Nebojsa Jakovljevic were detained at the Merdare crossing by the Serbian Ministry of Internal Affairs, Kosovo Prime Minister, Ramush Haradinaj announced to the public today. The president of the SLS, Slobodan Petrovic confirmed these allegations. Petrovic told RTV KiM that his party colleague is still, 10 hours later, detained for an “informative interview”.

In the meantime, SLS issued a press release stating that Jakovljevic was detained at Merdare from 4 o’clock in the morning until 3 o’clock in the afternoon. He and his son missed the doctor’s appointment for a surgical intervention his son was supposed to undergo in Belgrade at 10 o’clock.

SLS again requested an explanation from the President and Prime Minister of Serbia, as well as the director of the intelligence agency.

In addition, they requested a concrete action from the EU and international institutions whom SLS has already written to in relation to previous detainments of SLS party members at Merdare.

Jakovljevic has been in Merdare for more than 10 hours, Petrovic explained, adding that he had left at four o’clock this morning with his child, in order to arrive in Belgrade on time for a follow-up examination, which was scheduled for 10 o’clock, RTV KiM reported.

„Even as we are talking, he’s still there, for more than 10 hours. The procedure is the same as the one they used before, it is allegedly an informative interview with him, and we do not know the details yet. I expect that this will be solved quickly and that he will be able to give you more details,“ Petrovic told RTV KiM.

„For the third time, we are publicly seeking a reason from the President of Serbia, the Prime Minister, the head of the BIA, what the reason is and why this is done to people, especially those who are not part of Srpska Lista. To be completely clear, SLS members were not the only ones who were detained, but others were as well, those who are not part of Srpska Lista,“ Petrovic said, adding that this is political pressure and mistreatment of people who do not share the attitudes of Srpska Lista.

A week ago, the Deputy Minister of Youth and Sports in the Government of Kosovo and a fellow member of the SLS, Boban Stankovic was detained at the Merdare crossing for several hours where he was questioned by members of the Security Information Agency of the Republic of Serbia. The President of this party, Slobodan Petrovic was also detained and questioned at this crossing more than a month ago.

“The detention of Nebojsa Jakovljevic by the Serbian authorities at Merdare is another in a series of unacceptable and punishable actions,” Kosovo Prime Minister, Ramush Haradinaj reacted.

He wrote on his Facebook profile that „this action“ is part of an „orchestrated campaign of Serbian authorities that directly threatens the security of Kosovo.“

The Prime Minister called on the European Union and entire international community to pressure Belgrade to stop “this type of behavior towards citizens of Kosovo”. He stressed that Kosovo is committed to a dialogue that allows a final agreement with the „neighboring state“ and that any act opposing this is unacceptable. 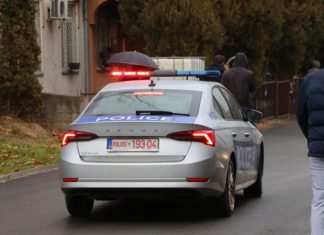