Exactly one year has passed since the Kosovo government revised its initial decision to impose a 10% tax increase on imports of goods from Serbia and Bosnia and Herzegovina and raised it to 100%, thus effectively suspending legal trade with Serbia and Bosnia. The consequences of that decision were not felt in the municipalities in the north of Kosovo, but its effect is noticeable in the Serb-majority communities in the south. Despite considerable involvement of foreign diplomats and numerous calls to the Kosovo government to withdraw or suspend this decision, the taxes still remain in force, as it appears, due to the persistence of Kosovo’s outgoing Prime Minister, Ramush Haradinaj.

The tax increase was proposed by the Minister of Trade, Endrit Shala, following Kosovo’s failed attempt at joining INTERPOL. The Kosovo public was thrilled over the adoption of the tax increase. Perhaps the most striking example of the approval of this decision was the cover of the daily newspaper Zeri of a STOP sign with the inscription „From the takozvano (so-called) Kosovo with love“. 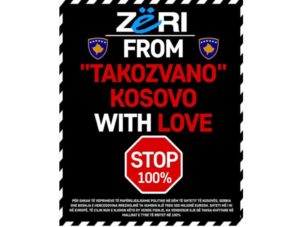 The most controversial form of showing support for this decision was the burning of Serbian products. Several such events took place in cities across Kosovo, including Kacanik and Decani, while several persons were arrested in the center of Pristina for burning Serbian products.

The burning of Serbian products in Pristina was directly broadcast by T7 television.

At that point, numerous political representatives, including Haradinaj, Veseli, Enver Hoxhaj and Limaj, argued that their influence was crucial to the decision to impose the tariffs. However, in the coming months, many of them changed their statements and started claiming the opposite. 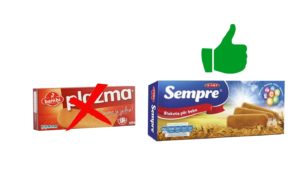 The decision to impose the tax on products from Serbia was personified in the famous biscuit from Serbia – Plazma, followed by a debate about which biscuit is better – the Kosovan Sempre or Plazma from Serbia. In many of Pristina’s pastry shops, even in Plazma cakes whose main ingredient is the Plazma biscuit, it was replaced by the Sempre. The pastry chefs claimed it tasted better, while outgoing Kosovo Prime Minister, Ramush Haradinaj also joined the debate. “’Sempre’ – it may be better than ‘Plazma’, because it is ours,” Haradinaj said at the time.

However, despite the taxes, products from Serbia found a way of reaching shops across Kosovo. A deputy in the Kosovo Assembly even expressed his dissatisfaction that the juice made near Belgrade found its way to this Kosovo legislative body.

It was suspected that the products from Serbia were being shipped to Macedonia, processed, and then repackaged with a sign indicating that goods were made in Macedonia.

The effect of the tax increase was quickly seen in the daily press from Serbia which stopped arriving in Kosovo as early as November 22nd. OSCE media spokesman, Armel Dezir reacted to this threat to the citizens’ right to be informed in their native language. A few months ago, this issue was brought to the fore again by Reporters Without Borders, who described the taxes as „financial measures used as a censorship tool for Serbian language media.“

Still, newspaper delivery is one of the few examples of tax-induced problems which has been resolved in the meantime. Serbian newspapers could not be found in Kosovo for 5 months, until ‘KIM Beokolp’ reached an agreement with the publishers and reduced prices so that the distributor could afford to pay the 100% import tax.

The decision on taxes caused a political crisis in the north and led to early local elections. In protest of the Kosovo government’s decision, the mayors of the municipalities of North Mitrovica, Leposavic, Zubin Potok and Zvecan resigned only a few days after the taxes were introduced.

The decision of the mayors from the ranks of Srpska Lista was welcomed by their colleagues from Serb-majority municipalities in the south. They, however, did not resign. The early local elections held on May 19th did not bring any significant changes, with three of the four Serb mayors – Goran Rakic, Zoran Todic and Vucina Jankovic – re-elected. Only the mayor of Zubin Potok, Stevan Vulovic was replaced by his brother Srdjan Vulovic. Despite the announcement that they would leave the institutions if the taxes are not abolished, the taxes were not abolished, nor did these political announcements came to fruition.

The decision of the mayors of the municipalities in the north to resign was followed by several protests against 100% taxes on products from Serbia, most often organized by the Student Parliament of the University of Pristina with a temporary headquarters in North Mitrovica.

During these protests, the students organized numerous performances, and one of them was a video game – „Throw Plazma over Jarinje“. Also, one of the student performances titled „Kosovoschwitz“ provoked a harsh reaction from the German ambassador, Christian Heldt. Heldt said that the performance is actually insulting the horrors the Serb people suffered at the hand of German Nazis during the Second World War.

Several music stars shared their support of the Kosovo Serbs’ protest against the 100% taxes by attending and hosting concerts in the north. The concert of the Serbian folk diva, Svetlana Raznatovic Ceca sparked controversy among the Kosovo public and announcements that she would not be allowed to enter Kosovo. Ceca was allowed to enter the country, however, her concert was attended by a surprisingly small number of people.

The news that garnered the most attention when it comes to displaying the flags of the country of origin next to the products was the Kosovo Market Inspectorate’s discovery in one of the markets in Pristina where, incidentally or intentionally, a Kosovo flag was displayed under the Serbian product – the ‘Noblice’ biscuit.

At the end of December, the Kosovo Government introduced another restrictive measure and decided to extend the decision on taxes to products of foreign companies that have production facilities in Serbia.

The introduction of these other measures was also announced in December, however, these new measures never came into force. On one occasion, Haradinaj cited „reciprocity for Serbia’s behavior“ as a new possible measure.

Announcements of „countermeasures“ also arrived from Belgrade, which was also never realized. The President of Serbia stated at the end of June that they did not give up on the countermeasures for Pristina, adding that it is „very difficult“ to do so without the Serbs in Kosovo also feeling the consequences of such decision.

Zubin Potok residents presented allegations of police brutality during the May 28th police action under the name „Smuggling“ when a dozen people were hospitalized after obtaining injuries while allegedly obstructing officials in performing their official duty. Six of the people injured also presented these claims before the court, where the judge documented the visible injuries on their faces and bodies. Also, at the last UN Security Council session on Kosovo, UNMIK Chief of Staff Zahir Tanin said that a month-long investigation by UN experts showed that there was „strong evidence of excessive use of force by Kosovo police“ during the May arrest action.

The impact of taxes on the availability of goods from Serbia in municipalities in the north became noticeable in the summer of 2019, after the Kosovo police action during which several police officers were arrested. A month after these arrests, Serbian merchants from the north stopped acquiring goods from the south, while at the same time, supplies from Serbia through alternative routes were suspended. This decision first led to a shortage of dairy and other essential products and later to a two-day long protest of shops and pharmacies in the north. Serbian officials called this period a humanitarian crisis, while Kosovo officials spoke of a staged crisis aimed at destabilizing Kosovo.

After the stores were opened, President Vucic also said that the procurement of goods from Serbia had resumed thanks to the Serbian government. Vucic also claimed that he would deliver food, water and medicine to the Serbian people „even if he has to become a notorious European Robin Hood.“

Although the Belgrade-Pristina dialogue was in crisis even before the introduction of the taxes and after the idea of ​​delimitation appeared in public, this move by the Kosovo government – allegedly a response to Serbia’s „aggressive campaign“ against Kosovo’s recognition and membership in international organizations – it was completely suspended after the introduction of the taxes.

To date, the withdrawal or suspension of taxes remains a major condition for the continuation of the dialogue of both Serbia and Western countries, including the US. After the last parliamentary elections in Kosovo, the winner of this election – the Self-Determination movement, announced that they could replace taxes with reciprocity. However, the party did not provide details of this policy of reciprocity, so it remains unclear what such a policy could entail.

Damage to the economies of Serbia and Kosovo

While this decision had no major effect on the supply of goods in the north, it had a significant impact on Serbia’s economy. According to the Serbian Minister of Trade, Rasim Ljajic, in the past year, Serbia exported fewer goods in the value of €395.7 million to Kosovo.

On the other hand, there are numerous studies of NGOs and international organizations that indicate that this decision had negative effects on the Kosovo economy as well.

Pristina think-tank GAP Institute published an analysis in May which stated that despite the fact that imports from Serbia declined by 88% (or €160 million) and by 83% from Bosnia (or €24 million), Kosovo again achieved a trade deficit. The institute concluded that this is indicative of the fact that local producers have not been able to utilize the space created in the market because of the taxes. They claim that the data indicates that the taxes have not achieved either the accelerated growth of the manufacturing industry in Kosovo nor did they result in an increase in the number of jobs.

A month later, the International Monetary Fund presented a similar discovery. The IMF’s representative, Stephanie Eble announced in Pristina that import taxes on products from Serbia and Bosnia and Herzegovina led to an increase in consumer prices, especially food products, which affected households with lower incomes and weakened the external current account.