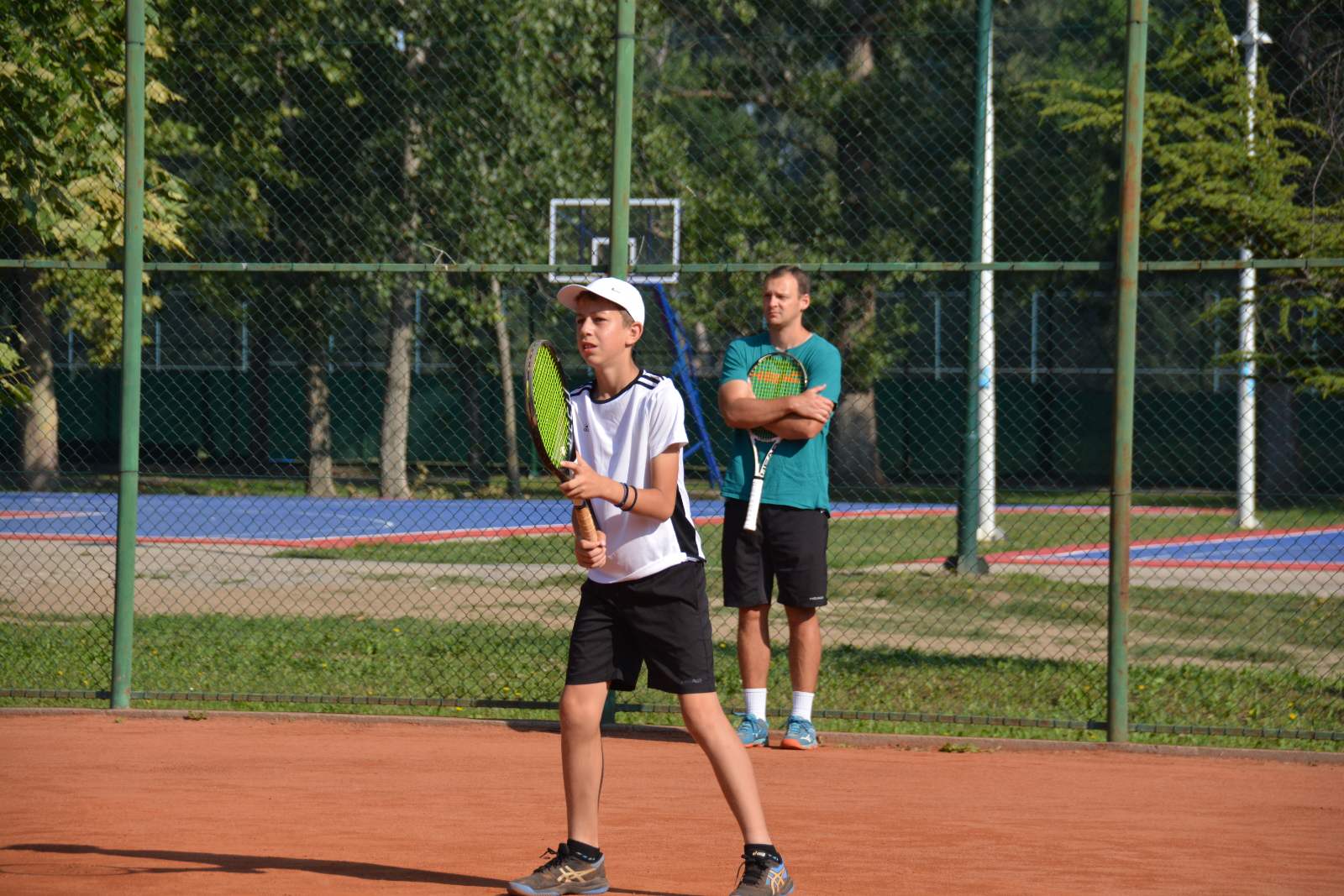 Filip Pavic from the village of Bostane near Novo Brdo was only eight years old when he first held a tennis racket in his hands. Today, six years later, he has already won numerous trophies, as well as five awards for the best tennis player of the year. With another season ahead of him, Filip hopes that one day he will turn his passion into a career and follow in the footsteps of the greatest tennis players.

The 14-year old Filip Pavic from the village of Bostane near Novi Brdo is an eighth-grade student at the Miladin Popovic elementary school.

He started playing tennis in 2016 in Gracanica, in a school that was then run by a local PE teacher, Dejan Zivic.

However, even before Filip officially began playing tennis, this young man spent hours in his front yard and house with a racket in one hand and a ball in the other.

„The tennis racket hadn’t left his hands ever since he received it as a gift. He broke almost everything in our house,“ Filip’s father, Goran Pavic told KoSSev.

Thanks to the persistence and perseverance of young Filip, he succeeded in replacing the yard and his room with a real tennis court.

„He told me about the tennis school in Gracanica, but as it is 40 kilometers away from Bostane because of work and other obligations, it would be very difficult to realize that,“ Goran added.

It all changed one day when Goran and his son came to Gracanica back in 2015 to watch a friendly football match between Crvena Zvezda and Gracanica.

At that time, Filip – who never stayed far apart from a racket and tennis balls – caught the eye of the tennis school coach in Gracanica.

„Dejan Zivic approached me and told me that my son had potential and that I should enroll him in tennis school,“ the proud father recalls.

The coach’s assessment proved to be true the very next year.

Filip immediately took part in tournaments in all major cities throughout Kosovo – Prizren, Pristina, Pec… At the end of the same year, he managed to earn the best player award given by the Kosovo Tennis Federation.

He won the same award in the following years – including last year. So far, he has won all of the matches he has played in Kosovo, Filip’s proud father confirmed for KoSSev.

Filip was the only Serb to participate in all these tournaments, Goran said, adding that at the beginning that „it felt uncomfortable a bit“, but that it also changed later. So far, we have not had any problems, in any of the tournaments in which my son competed – he underlined.

„Despite all the difficulties we faced, we tried to provide as much as we could, it is very difficult to coordinate everything – to take him to train, tournaments, camps,“ he added.

In addition to tournaments organized in the territory of Kosovo, Filip previously took part in competitions in central Serbia – namely, Nis – where he achieved a notable result, and Lajkovac – where he emerged as the tournament winner.

As one of the most talented athletes from Kosovo, Pavic attended a reception hosted by the President of Serbia in August last year. On that occasion, Vucic gifted a racket and a ball to Filip, who had won 25 tournaments by that time, and told him to continue his winning streak.

Filip attended the tennis school in Gracanica for two years, after which he continued to improve his tennis skills in the settlement of Marigona, not far from Gracanica, in the private complex owned by Hysni Imeri, whose sons also play tennis and compete in tournaments in Kosovo.

Goran says that he met Imeri at the tournaments where their sons competed, after which Imeri offered for Filip to train for free in his private complex – where he still trains today.

Goran revealed that he is grateful for the opportunity his son has been given, noting that they would like to provide the best possible conditions for him. However, he stressed that something like that requires a lot of time and money.

The Pavic family asked for a scholarship from the municipality of Novo Brdo, however, as Goran testifies – „the municipality did not care to hear about a child who has been a champion for five years in a row“.

Unlike the municipality of Novo Brdo, the Kosovo Office within the Government of Serbia promised to help Filip. However, according to Goran, nothing ever came of it.

„They told us that he should not play for the Kosovo league and that they would help us, make it possible for him to train and compete in Serbia, but in the end, nothing came of it,“ he added.

The humanitarian organization of the diocese of Raska and Prizren – „Majka devet Jugovica“ was to only one that provided any kind of help to the young tennis player, his father reveals.

This organization, together with the diocese, has bankrolled Filip’s participation in several tennis camps and covered the necessary costs.

In the previous period, Filip attended a camp in Zlatibor, the Puma academy in Kragujevac, but also the tennis academy of Bogdan Obradovic, where he also trained for free.

Goran emphasized that all these camps helped his son to hone his skills, adding that they were all a short-term solution. He expressed hope that a permanent solution will be found so that Filip can reach his full potential one day.

Young Filip has the same dream – to participate in the most famous tennis tournaments around the world. According to him, moving to Belgrade and attending the Bogdan Obradovic tennis academy – where he could train all year round, is a necessary step to turn that dream into a reality.

Still, until he achieves this dream, Filip is facing another season and competitions all over Kosovo. Next week, he will be participating in the tournament in the under-16 category in Prizren.

„It will be a little harder now, the competition will be stronger because he switched the category – from 14 to the category from 14 to 16 years, but we will continue to work hard,“ Filip’s father told KoSSev before taking him to an improvised training session at the sports hall in Bostane, to prepare for the upcoming tournament.

„We are managing, what else can we do,“ he concluded.